You want out of Dan Kibler? Sit down and you’ll hear a story… – Salisbury Post 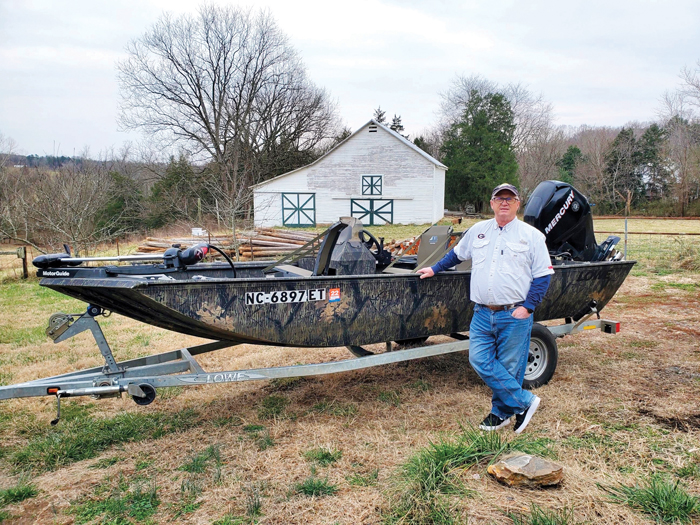 You want out of Dan Kibler? Sit down and you will hear a story…

The SS Minnow has finally made its maiden voyage. With apologies to the old 30-minute sitcom about a group of shipwrecked vacationers that ran for 98 episodes between 1964 and 1967, the SS Minnow is now parked on a concrete slab behind my house.

I haven’t named my boat yet, but so far it ranks fair with the old Gilligan’s Island boat when it comes to issues.

Retired November 30, I bought the boat in mid-January, looking for something I could use to fish and duck hunt with my son, Andrew, and not wanting to spend an arm and a leg. After months of searching various sites online, we found him resting in an outbuilding behind a house in Lumberton. A little negotiation, a few signatures on paper and it was hanging in the back of the van on the way home.

But for seven months, it was more of a shipwreck. First, Lake Salem in Winston-Salem, his main fishing destination, was under construction and closed to boat traffic. So Andrew undertook a lengthy upgrade, which included stripping the aluminum 16-foot Lowe’s Sportsman of all wiring and replacing it with higher quality marine wire. Then the single side console sounder detached, to be replaced by a new sounder, with a second provided for the trolling motor on the bow.

Then the battery compartment was stripped, three new batteries purchased (my checkbook hasn’t recovered yet) and installed, along with some new wiring and a bunch of circuit breakers. The 12-volt trolling motor was then released, replaced by a fancy and expensive version with a feature commonly referred to as “point lock” or “iPilot”.

By Memorial Day, it was finished, and Andrew—he’s on the title as “secondary owner” because he funded the upgrades—towed it to Ocean Isle for a vacation with his in-laws. He christened it one day with his future brother-in-law, then the next day the new trolling motor blew up. It was promptly returned to the physical catalog store he ordered it from for a full refund knowing there was a 5 month wait for a replacement.

Alright, I thought. Lake Salem isn’t open yet and it’s way too early to think about duck season. Around the time the Lake Salem boat launch reopened in late August, Andrew returned the old trolling motor to its place on the bow. I pulled it out one morning, dropped it in the water, fired up the 60hp Mercury outboard motor and drove off – at least until I tried to turn the flying. Blocked. Solid. Steering cable broken. I towed it to the store, fixed it, and picked it up just in time to tow it to the Outer Banks for the holidays. On the third day of vacation, Andrew backed the truck up the ramp at Teach’s Lair Marina in Hatteras, the boat floated free, and I fired up the outboard motor and spun it in the direction of Pamlico Sound – and it turned the wrong way. I tried to correct, and it turned the wrong way again and again.

Eventually I looked at the stern as I turned the steering wheel and the engine spun in the wrong direction. The steering cable had been replaced, but it was put in backwards, so when I turned left, it went right, and vice versa. So much for fishing on vacation.

You don’t want to dodge the Hatteras-Ocracoke ferry when the boat turns the wrong way every time you turn the wheel. Fixed a week later ready for another trip to Lake Salem but this time Andrew was rewiring the trolling motor connection so it was strictly a shakedown trip to make sure the direction was working and to put some waypoints of beautiful spots I had found last year when Lake Salem was 8 feet below the full pool for construction.

Finally, a week later, with the old trolling motor wired up with a new connector, I backed the boat up and headed to a place by the lake, one of those places I found when the water was low. I found it in good condition, and after realizing I forgot the plug – I wonder why the boat was filling with water – and leaning over the transom to screw it in place, I set to launch a Zoom Ol’ Monster colored junebug worm on a Carolina rig. The sinker immediately snagged on rocks so I knew I had the right spot and marked a waypoint in the bow sounder.

The next throw, the lead bounced through the rocks, then stopped. I started to drop it with the tip of the rod, when I noticed the line moving, so I put the hook in. Before long, I was licking a big bass and taking aboard – my first official passenger. I put it in the livewell and checked that the aerator was working (it was, hallelujah!), I made a full circle around the target to see if a different casting angle could produce a different fish. When that wasn’t the case, I took out the first one and headed to several other destinations.

Now, if I can just get used to having a foot-operated trolling motor (a boat 35 years ago had a hand-operated one), and understand space-age electronics (I would have was thrilled with a simple blinker), I may have something that can bring me hours of great retirement joy – as long as the fish bite and the ducks fly.