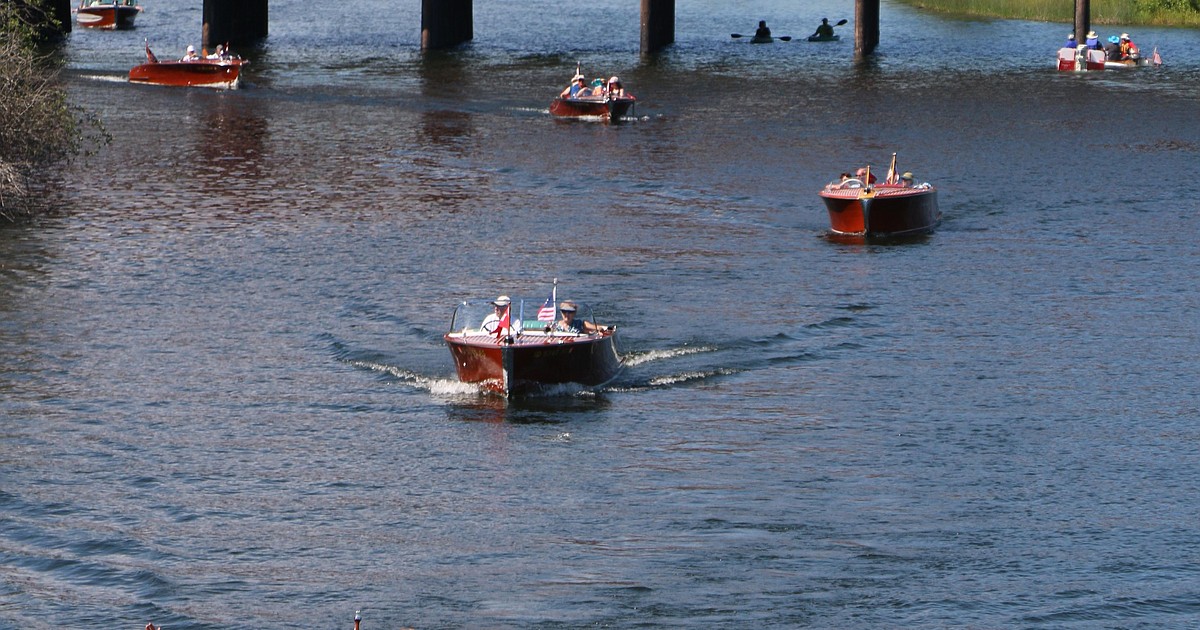 He had done work for someone “with more toys than money”, and the man offered him one of his wooden boats in exchange. Bordenave figured it wouldn’t hurt to look at the boat, and he figured he had nothing to lose by accepting the deal.

“I watched it and we traded, then all of a sudden I owned a wooden boat and I didn’t know how to deal with it,” he said. “Then, of course, you know, after almost sinking it on me six times, I kind of got into the boats.”

Despite the near misses, Bordenave and his wife, Kathleen, said the wooden boats had something that set them apart from other ships.

“Once you’re in and you start, pretty soon you’re cruising around the lake or going up one of the little channels that are on the river and the lake, there’s just something about that “Bordenave said during a stop talking to people visiting the annual Sandpoint Wooden Boat Show on Saturday. “They say our best memories are the experiences we never had, and I actually remember doing that when the boat was originally made. So at one point I was on this boat in the 1940s and I was sailing on it. So that’s what I’m doing now.”

While he had a 13ft aluminum boat, Bordenave said switching to a wooden boat came with a certain learning curve.

“All of a sudden you’re doing boat mechanics and maintenance and boat repair,” he said. “It’s not like a car, because if a car breaks down, you’re just kind of ‘OK’ and roll it to the side of the road. But if the boat breaks down, you float at the middle of the lake.”

Bordenave laughed, then stopped trying to find the right words to describe the difference between a wooden boat and an aluminum boat.

“You know, an ordinary boat floats on the surface of the lake, a wooden boat crosses the lake,” he said. “It actually plows through water. It pushes water away, whereas most boats you ride on water.”

The Bordenaves said that wooden boats, such as the “Aphrodite”, have a soul and a personality that manifests itself in old-fashioned craftsmanship and attention to detail not found in the most modern boats.

“This boat is for me, it’s not just her age. This boat has an aura,” said Kathleen Bordenave. “It’s like walking into an old Victorian house or walking into a house that was built in 1940. There’s a certain era, a certain energy, everything about it.”

The boat lives up to its name, with many proposals and several weddings on the ship, as well as a number of excursions to take a bride or wedding party to the ceremony.

Pierre Bordenave said he loved the stories shared by previous owners, from when he delivered Bayview’s mail to smuggling liquor and visiting homes of disrepute.

“We pass them on,” he said of the tales. “Everyone passed on the stories.”

Jim Atkinson and his wife, Cindy, share this love for wooden boats.

Atkinson said he was introduced to wooden boats by his father, who owned five boat dealerships in Florida. It was, he says, the start of a lifelong love for ships.

Although not his first wooden boat – it was a 16ft boat he restored with a friend, the ‘Twin Fin’ is all muscle and quickly won his heart.

The boat was only in production for two years because its high price – $7,900 in 1959 – kept many people from buying the boat.

“I didn’t do the math. [on what it would cost today]”, Atkinson said. “But it would have been the equivalent of four or five cars.

He remembers seeing the boat on the showroom floor at one of his father’s dealerships. This sparked a lifelong love for wooden boats.

“I ended up getting interested in wooden boats in general and, in particular, this model because it is so different from all the others you see,” he added.

Atkinson said there’s something about the overall design, the fins that mimic the look of a street cane or a muscle car that makes him love the boat. He and his wife, Cindy, also love that it accommodates a lot of people – eight or nine passengers – allowing them to take friends new and old for rides.

“It’s a fun boat,” he added. “That and just the general kind of muscle car on the water call.”

Atkinson said he bought the boat in 2007 from a professor at Ball State University in Indiana. The boat was in poor condition – the engine was frozen, the rudder had been lifted off the bottom and the bow had come off the hull.

“We temporarily did some things with the running gear and the engines and other things so we could use it for a few years. Then we got tired of trying to sink,” Atkinson said before chuckling.

The Atkinsons said they love the camaraderie found at boat shows and the memories they are able to create on the lake, whether on Lake Pend Oreille during regular boat show visits or at home in McCall’s. .

Even memories like when they first put the boat in Idaho.

“We were excited to put it in the lake,” Atkinson said. “We loaded a whole bunch of people in, got out, and a wire was loose, and we had to get towed by a little Jet-ski.”