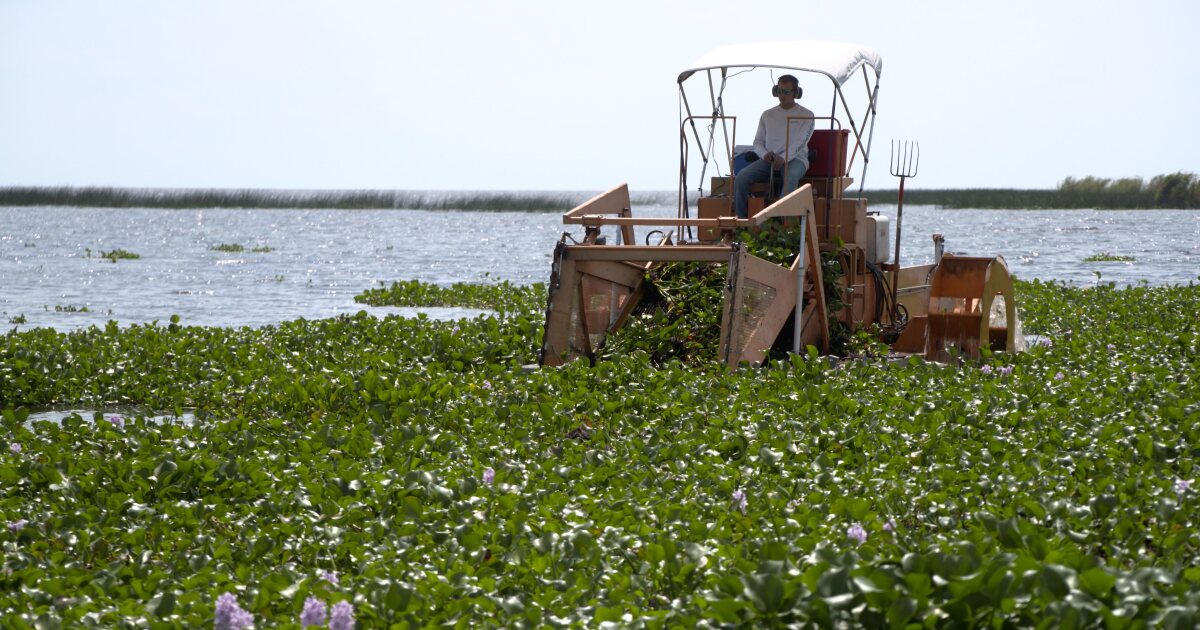 Right now, there’s a box-like metal thing sliding along the surface of Lake Okeechobee. It’s called a boat, but it looks like an aluminum shovel that doesn’t seem like it should float. It moves with paddle wheels and sports a pitchfork.

The purpose of the machine is to rid the surface of the lake of water hyacinth, an invasive species from the South and which grows at breakneck speed.

The bow of the ship bends down and as it moves forward the waterweed slides into a cavernous hold with its bulbs, spongy bulbous stems, and roots colored black and purple. Along the way, he may pick up a frog or two, and sometimes a lot of sediment gets into the pile.

The mixture does not smell good.

After being shredded, it turns into a nitrogen-rich sludge, which is pumped onto land owned by volunteer neighboring farmers where it turns into an organic alternative to store-bought fertilizer.

The smelly, messy effort is the Florida Fish & Wildlife Conservation Commission’s latest stab at ridding Lake Okeechobee of water hyacinth, groups of which can double in size in a week. Individual numbers of hyacinths can increase over a hundred times in less than a month.

The hope of the 35-acre pilot program is to find a way to successfully clean a body of water, or parts of it, of hyacinth without using chemicals or other extreme measures.

“This project underscores the FWC’s commitment to finding innovative and effective solutions to manage invasive aquatic plants in Florida,” Melissa Tucker, director of the FWC’s Species Habitat and Conservation Division, said in a statement. communicated. “While it’s too early to tell if we’ll be able to use this technique on a larger scale, we’re excited about the opportunity to have a new tool in the toolbox.”

The worst weed in the world

Apart from its pretty pink or lavender flowers, it would be hard to conceive of a more unpleasant plant.

Water hyacinth blocks the sun, which kills native plants growing below. As these break down, the oxygen in the water is depleted and fish kills result. The hyacinth is also home to a freshwater snail that harbors a parasitic worm that can cause schistosomes in humans. Schistosomiasis can infect the intestines and urinary tract, leading to unpleasant trips to the bathroom. Untreated, it can lead to kidney failure, liver damage, infertility or bladder cancer.

Fresh plants have a kind of prickly crystal formation that can cause severe itching. Then there are mosquitoes, which love to breed in the nooks and crannies of plants that collect standing water.

A 2018 Times of India article covered an event in which around 15,000 people living in Mundhwa were bitten by mosquitoes. Soon after, the villagers staged a protest for the local government to remove the hyacinth. They covered themselves in mosquito nets and lined a river filled with plants – and mosquitoes. The newspaper called the plants “highly invasive and commonly considered the world’s worst weed” which created the “mosquito menace”.

Water hyacinths made their way from South America to the United States in the 1880s. No one knows exactly how the plants got here, but theories abound. The leading theory is that the plant was a gift from a delegation from Japan to the 1884 World’s Fair in New Orleans. Another has the plant spread nationwide by a New Jersey-based exotic seed supplier.

The plant spread so quickly that in 1890 it blocked rivers in Florida and Louisiana, hampering commerce and pleasure craft. The states asked the federal government to do something, and the Army Corps of Engineers was given the task.

Today, the army corps uses a combination of biological, mechanical, and chemical means to try to control water hyacinths.

First problem: Water hyacinth likes slow-flowing waters with high concentrations of nutrients like, say, Lake Okeechobee, which has been polluted by runoff from large-scale farming and development for decades.

Second problem: the plant’s ability to grow is faster than anyone’s ability to extract it by mechanical means.

The agency abandoned mechanical removal for mass clearing of hyacinths in the 1980s. The Army Corps found the methods too expensive, too limited, and too damaging to other plants and animals.

This was after the agency attempted to employ harvesters to replace chemicals on Lake Okeechobee. The plants were simply growing faster than the machines could circle them.

Now the Corps is doing what the FWC is testing, which is using harvesters to cut water trails, clear navigation channels, and remove weed around water intake systems. , dams and locks. The FWC, however, takes it a step further by turning the plants into a nutrient-rich mush and giving it to farmers.

FWC spokeswoman Carli Segelson said the harvester test is the latest of many ways the agency is trying to rid the big lake of small but fast-growing invasive species, including water lettuce. Fishermen work at the Indian Prairie Channel on the northwest edge of the lake.

The agency has tried several different ways to manage aquatic plants, including herbicides, other types of mechanical harvesting, biological controls like non-breeding grass carp eating it, and manual removal.

“What’s unique about this situation is not that the mechanical harvester is used on the lake,” Segelson said. “But the way we eliminate the material.”

Environmental reporting for WGCU is funded in part by Volo Foundationa non-profit organization whose mission is to accelerate global change and impact by supporting science-based climate solutions, improving education and improving health.

If you would like to receive a monthly environmental newsletter from WGCU, sign up for green flash today.