Where failure is not an option 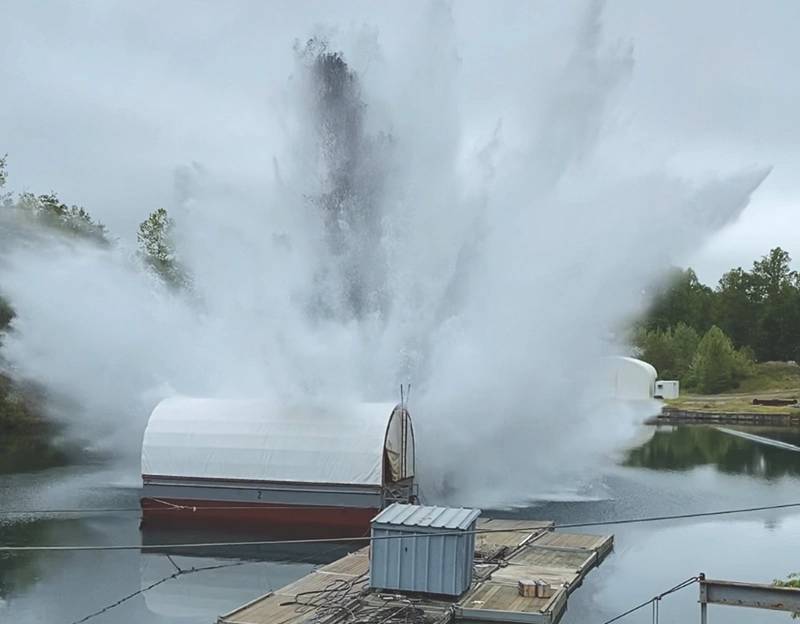 Inlet filtration used for critical ship systems, such as propulsion gas turbines, must pass rigorous testing before installation. These tests include a range of vibration and shock tests which simulate vessel operation and test system operation in the event of impact or explosion.

Vibration tests
The navies have standards for vibration testing. In the US, for example, the MIL-STD-167-1A standard details requirements for US Navy vessels to ensure equipment remains reliable with vibrations from engines, propellers and other onboard systems. . It details a test range of 4 to 33 Hz, although a specific vessel may only require a smaller range.

Testing begins with an exploratory phase where the equipment is attached to a vibrating table and tested at each frequency for a brief 15 second interval. This establishes that there are no obvious issues before further testing begins. At lower frequency ranges, the test table uses higher amplitudes, and at higher frequencies, lower amplitudes.

The board is then adjusted to run each frequency for a period of five minutes. Based on the accelerometer readings, the frequency or frequencies of the endurance tests will be established. If the accelerometers show no suspicious areas across different amplitudes, the highest range is selected and run for an extended test period of two hours. If two ranges appear to cause a vulnerability, each is run for one hour. If multiple ranges require extended testing, they are 40 minutes each. After two hours (or longer if multiple ranges require investigation), the engineer can confirm if the equipment has any issues that require corrective work. If so, the tests should be repeated. Hopefully the shorter tests at the beginning of the test cycle will help ensure that any suspect areas are identified and corrected before the longer test cycles.

Shock test
After the vibration tests have been successfully completed, the equipment is prepared for the shock tests. These tests, which in the United States are covered by the MIL-DTL-901E standard, are designed to ensure that vessels will remain in service even after an explosive impact.

The tests are divided into three ranges: light, medium and heavy. Smaller tests use a hammer with adjustable height and weight. The equipment is fixed on a plate, which is struck by the hammer to simulate small shocks. The orientation of the test table varies depending on the class of equipment and how it will be mounted on board, with hammer blows at three different heights and up to three orientations.

Medium impact tests use a larger hammer with more height options. The height of the hammer is adjusted according to the overall payload required and the size of the equipment. Again, different impact orientations are tested.

More payload is needed for heavy duty testing. Equipment is rigidly mounted to a base plate or loading arm on a floating barge, with orientation depending on where it will be installed on the vessel, whether hull, deck or section internal. An explosive device is used to simulate the impact and is placed at an appropriate distance from the barge. The depth in the water also varies with the size of the load, with greater depths being used for higher loads.

Explosions must impact through and in line with the ship. The in-line explosive is placed farthest and is usually the last test to be performed as it is the least destructive and easiest to pass, allowing previous tests to be modified if necessary to avoid having to perform the test full suite in case of any problem. Lateral explosive tests are scheduled to gradually approach the barge.

Summary
Vibration and shock testing are essential for inlet filtration systems, as they are essential to ensure reliable operation and the vessel’s ability to return to a safe location where damage can be repaired after an explosion or event. . Parker filtration systems are used by various navies around the world with the certainty that they will continue to function and keep the ship operational in the event of combat.

Understanding and designing shock and vibration resistant systems is fundamental to delivering embedded systems. The tests are complicated, with many different aspects covered to ensure they reflect the variety of potential issues in real operation.

Parker has the in-house expertise to support naval applications and its equipment is proven to deliver performance and reliability in the harsh conditions ships may be exposed to.