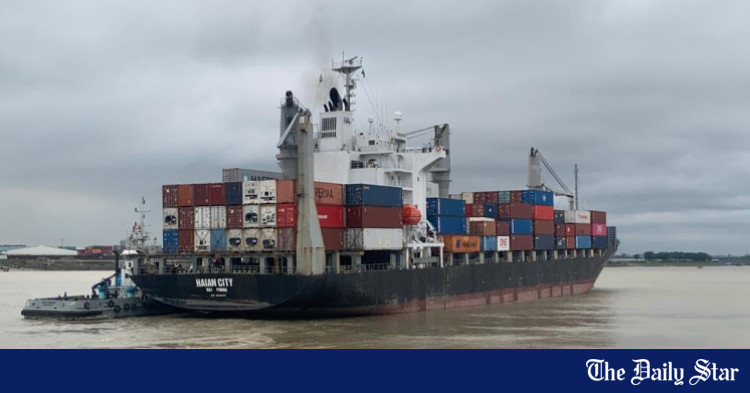 The MV Haian City, a Vietnamese-flagged container ship, is seen damaged due to a sideways collision with an oil tanker in the open sea. The 172-meter container ship was leaving Chattogram with export cargoes of worth Tk 800 crore to Singapore. Photo: collected.

The MV Haian City, a Vietnamese-flagged container ship, is seen damaged due to a sideways collision with an oil tanker in the open sea. The 172-meter container ship was leaving Chattogram with export cargoes of worth Tk 800 crore to Singapore. Photo: collected.

The Chittagong Ports Authority (CPA) recently rescued a badly damaged ocean-going vessel which had suffered an accident on the high seas which could have caused the loss of export cargoes worth Tk 800 crore and could create an obstacle to navigation.

The timely and courageous action taken by the CPA paid off here and saved the 172 meter container ship when it collided sideways with another vessel.

The CPA, in cooperation with Prantik Bengal Salvage and Diving of Bangladesh, performed the delicate task of bringing the vessel, which heeled 7 degrees after being hit, to shore.

The collision left huge holes in the ship’s hull, which were repaired by diving underwater, another task that requires great skill.

The CPA called the whole operation a great achievement for the port as well as for Bangladesh, as the work highlighted the port’s capability to the global community and created a shining image around the world.

How was the accident?

The Vietnamese-flagged container ship MV Haian City left Chattogram Port for Singapore on the morning of April 14 with 1,105 twenty-foot equivalent units (TEUs) of containers, including 718 TEUs loaded for export.

At around 10:30 a.m., the ship suffered a side collision near Kutubdia about 14 nautical miles from the Patenga naval base.

The center of the place that suffered the main pressure from the side collision is seen here in the body of the MV Haian City. Photo: collected.

The center of the place that suffered the main pressure from the side collision is seen here in the body of the MV Haian City. Photo: collected.

The incoming Bangladeshi tanker MV Orion Express rammed and ripped holes in the container ship and an empty container instantly fell from the vessel into the sea.

The tanker managed to arrive at Chattogram the same afternoon, but the tilting town of Haian had to anchor at sea as two of its holds were flooded due to an underwater puncture in its hull.

After the accident, the shipowner and charter companies sent investigation teams to the scene to determine if the damage could be repaired at sea.

But they had to abandon the repair-in-place plan because it was risky to work on an inclined vessel, said Rafique Uddin Ahmed, managing director of local vessel agent Intermodal Pte Ltd.

The damaged vessel was brought back about 20 days after the accident and later moored at Karnaphuli Dry Dock on the southern part of the Karnaphuli River.

On May 4, the Prantik Bengal played the major role in the 5-hour rescue operation initiated by the CPA.

The salvage operation was carried out by six tugs – four from CPA and two from Prantik – along with two pollution control and recovery vessels from the Chittagong Port Authority.

Due to water in the ship’s holds, the ship’s draft reached 11 meters, 1.5 meters more than the permitted draft of 9.5 meters at the river port jetties Karnaphuli, said Syed Md Arif, president of the Bangladesh Shipping Agents Association (BSAA).

The draft of the Karnaphuli Graving Dock in the southern part of the river has been improved by dredging to moor the ship there, he said.

Two CPA pilots boarded the damaged vessel and maneuvered it from Kutubdia to Karnaphuli Dry Dock.

“Recovering a damaged vessel carrying over 1,100 TEUs of containers and reintroducing it into the port channel was a brave attempt,” Arif said.

The Eid holiday was happening then, Alam said.

But sensing the threat, the CPA Chairman called an emergency meeting with senior port officials and the ship’s local agent, its insurer P&I (Protection and Indemnity) Club, the Bangladesh Navy and Coast Guard. and decided to bring it back, he added.

The salvage team discusses how the damaged vessel can be salvaged and brought ashore for repair. Photo: collected.

The salvage team discusses how the damaged vessel can be salvaged and brought ashore for repair. Photo: collected.

The vessel was in a dangerous position after the accident as it heeled over, posing a serious threat to vessel movements to and from the country’s premier port, Alam said.

If the ship sank in the bay, all of the ship’s movement passage to port could have been blocked, he said.

It was reported that the ship’s No. 4 and No. 5 holds were flooded due to an underwater puncture and containers loaded in the holds were hit, said Samudera Shipping Line, the city’s charterer. de Haian, in a statement on April 19.

“Due to a lack of safe access, the extent of damage to the containers cannot be determined. A Board of Inquiry is being formed under the Bangladesh Shipping Office to investigate the cause of the incident of collision in order to assess the losses and determine the responsibilities.

The collision created a relatively smaller hole in the port hull plate, but the main damage was done underwater, said Md Golam Sarwar, president of Prantik Bengal Salvage and Diving.

A large 22ft by 26ft hole in the hull was causing the main damage to the ship, he said.

The holes were repaired by welding a massive 33ft by 40ft patch of steel while diving underwater, Sarwar said.

Clockwise from top left, 1) Workers prepare the 33ft x 40ft steel patch which was welded to the body of MV Haian City. 2) The steel patch is seen just before being attached to the 172 meter container ship. 3) The inside face of the patch. 4) The patch is seen after the completion of repair work. Photo: collected.

Clockwise from top left, 1) Workers prepare the 33ft x 40ft steel patch which was welded to the body of MV Haian City. 2) The steel patch is seen just before being attached to the 172 meter container ship. 3) The inside face of the patch. 4) The patch is seen after the completion of repair work. Photo: collected.

Welding was complex, so ex-marine engineer Sarwar took up underwater salvage and repair.

Complexities other than salvage, repair

The Chittagong Port Authority wanted to ship the loaded export containers by another vessel, but was unable to because the Vietnam-based ship-owning company Hai An Transport and Stevedoring Joint Stock Company said General Average or GA.

Grand Averaging is a long-established procedure in the marine industry to fairly distribute extraordinary losses and expenses between the parties (i.e. ship and cargo) involved in the event of an accident, according to the Danish shipping giant Maersk.

Finally back in action

More than two months after the accident, the ship was certified as seaworthy or fit for sea voyage by an international classification society.

It left Karnaphuli Graving Dock for Singapore on June 21 and is expected to reach its destination by June 29, according to another statement from Samudera released on June 21.

Samudera also said that the city of Haian has completed its temporary repair and obtained approval for a single trip to Singapore.

The vessel is due to depart Singapore after the cargo is fully unloaded for permanent structural repair in dry dock, the statement said.

What the experts say about recovery work

“If Prantik wasn’t there, we had to bring in expertise and logistics from abroad to save the ship,” he said.

Giving an example, the senior captain said that about 10 years ago a huge ship brought to the scrapyard ran aground at the outer anchorage of the harbour.

Modern heavy tugs had to be brought in from abroad then to salvage the vessel, he said.

More than 15 salvage companies are currently engaged in salvage operations on inland waterways, he said.

Here, Chowdhury recommended the government provide political support to equip other salvage companies so that they can rescue ocean-going vessels.

“The salvage operation not only saved the vessel but also exported cargo worth Tk 800 crore which could be a permanent impediment to shipping,” BSAA Chairman Syed said. Ms Arif.