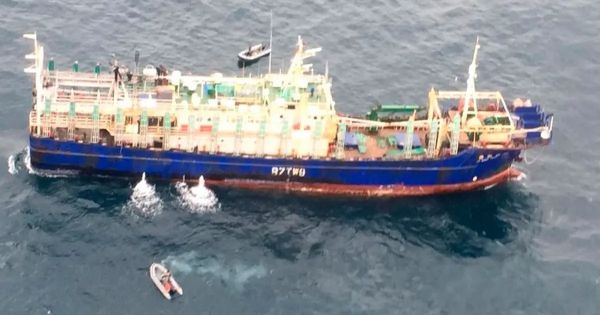 The head of Uruguay’s National Directorate of Aquatic Resources (DINARA), Jaime Coronel, told reporters that all evidence submitted by Uruguayan Navy authorities was being analyzed in the case of a trawler from Chinese fishing caught while carrying out illegal catches in territorial waters earlier this month.

Coronel also said in a television interview that his agency was requesting additional information “to confirm certain events.”

“Based on the completion of this diagnosis, DINARA will issue a report that will be submitted to the Navy for a general understanding of what happened,” he added.

On July 2, the Uruguayan Navy seized a Chinese-flagged vessel fishing illegally in the country’s Exclusive Economic Zone (EEZ). The Uruguayan fleet command had initially detected two of these boats near Punta del Este.

Navy planes flew to the area to confirm the situation and took pictures of the vessels, one of them, the Lu Rong Yuan Yu Yu 606, apparently drifting with fishing gear laid out.

Early Saturday morning, the aircraft took off again and this time detected three possible fishing targets, including the two previous sightings. The ROU 23 Maldonado intercepted the Lu Rong Yuan Yu 606 on Sunday evening. At that time, the Chinese vessel headed northwest in defiance of the Uruguayan patrol vessel’s instructions to be ready for inspection. Finally, at 10:30 a.m. on Monday July 4, the Chinese ship stopped 55 miles southeast of Punta del Este. At noon it was seized and diverted to the port of Montevideo.

The 28 crew members of the Lu Rong Yuan Yu 606 -14 Chinese and 14 Indonesians- must remain in Uruguay pending further investigations.