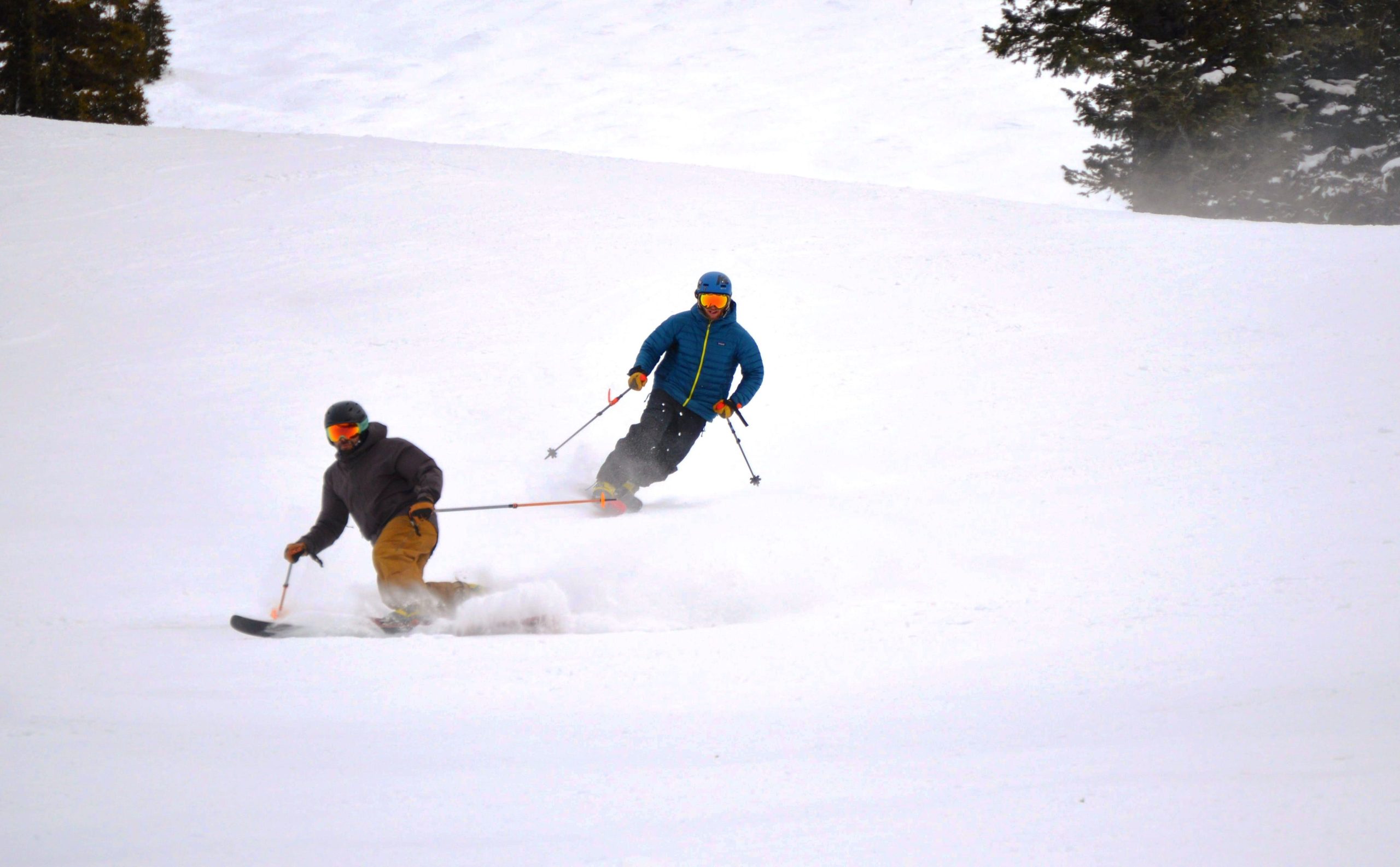 Even with all the varied and glorious funk of end-of-season fiestas in full swing, it’s still easy to spot a Telemarker harvesting corn.

The curious technique is elegant and iconic, as is their respect for flexible boots and deep turns.

But what really stands out is the lucky welcome that somehow organically links each enthusiast to the next; hippies or punks, misfits or mundane; man, woman or child, complete strangers form like a family when the heel is free.

With surprisingly few manufacturers, globally, Telemark is a seemingly small company out of necessity. But where there are mountains, there is a path. And there just so happens to be a team with an international rep that’s been busy throwing some top-tier kit down a little dirt road in Teton Valley, Wy-Daho.

The business/establishment known as 22 models is the clubhouse Calvin & Hobbes would have built if the comic book duo had swapped the toboggan for skis. The Workshop is a DIY Tech-meets-Tang combo, filled with a gigantic fridge covered in stickers.

Luckily, the crew of 22 took time to guide an initiation to telemark. But the hallmark of a dyed-in-the-wool ski hooligan is delay.

If they weren’t obsessed (over turns, product or stupidity) there would be no problem being on time, and therefore nothing separating them from average, so watch the sun getting up while waiting forgotten in an icy parking lot actually bodes well. This indicates that whatever happens next, at the very least, will be genuine.

The first crew member of 22 to arrive is Devin. He works at the Assembly. But he’s not here for the article. In fact, he is not aware of any article. Rather, somewhere in the morning’s adventures, his truck suffered a flat tire, so he grabs some tools. Devin opens the factory and, inadvertently, the lesson as well.

Slide pins and plates, bellows and climbing balls; Heel tubes, tail throws, latches and claws; the pieces of a Tele-Puzzle are numerous. Each component can trace its origin to a good old creative necessity. And all of them come together through the innovation of the engineering monkey company.

“That’s where all the pieces come together,” Devin interrupted the tire repair to talk shop. “Twenty-two is an industry leader. Everyone here is ‘in’ because they love telemark and having fun with friends. Plus, we’re proud that our gear is made in the USA.

Behind the doors of 22 Designs 25,000 pairs bindings – built to the new Telemark standard – have been handcrafted and shipped worldwide in the past year alone. Zooming out to look at the wider industry, Telemark products recorded a growth rate of 127% over the previous year – a rather big clue that what is happening is far from to be “marginal”.

Stemming from the ready-to-pull roots of 3-pin bindings, leather boots and the free life, telemark skiing, in a way, organically cultivates a garden in which all varieties are welcome. Add to that the technological rigor brought by 22 Designs – plus others like them – and Tele-Society has the kind of healthy micro-climate that is likely to last for quite some time and attract growing numbers of skiers.

And the current main attraction is “New Telemark Norm” – NTN for short.

As if to add punctuation to this moment in the lesson plan, the factory door suddenly swings open and walks in Jake, 22 Designs ambassador and wild leader of today’s foray into all things telemark. . With proven ease, he leads a brief parade through the machines that equip the NTN technology about to be demonstrated today.

“I got hooked on this gear thanks to a buddy,” smiles Jake. “He gave me a setup and then took me up Mount Hood in July – having never skied in my life,”

“It was 6,000 green feet of face planting but I still remember thinking, this feels good! I’m committing.

And from “the start”, NTN feels like a natural innovation, resulting from generations of Dreamer/Tinker’ers who planted the seeds of modern TV (while charging on skis like whaling harpoons). Best of all, NTN’s new school approach still manages to stay true to its roots.

Like underwear, the innovation behind NTN is all about support and performance.

Adaptable to wide boards and increasingly difficult descents, NTN technology takes over the Underfoot as well as the Tip to obtain maximum stability and precision. It is an elegant machine. And the field tests certainly suggest it marks the next horizon in telemark.

Once on the mountain, the descent experience is a dance between form and grace, with a touch of a welcome homecoming. And mischief, of course, is a mainstay from first chair to last call.

Devin, who fixed the tire, decided to co-drive today’s tutorial. He and Jake head straight for a wide rolling field where technique can be showcased. At the top of the slope, there is no need for more words. Skiing will speak.

To hear Jake describe it later, there is silent dialogue between Ski and Skier; a two-way conversation to feel the optimal path down the mountain.

From the moment Devin and Jake hit the turns, it’s obvious there’s limitless style to this downhill method. The pair is also accomplished, but from opposite sides, and with entirely unique iterations of the sacred bend.

The first discovery on the journey to find your “turn” is that it is less about lifting your heel than “crushing the can”. Beneath the toe of each climb or inside ski there is a pop-top ship that wishes with all its aluminum power to be compressed. Responding to the demand, the hip and knee coil in unison to form a gently downward-pulling piston. He plants at the top of the box, presses it flat and locks the bend. But it’s easier said than done.

Like most things, early iterations are clunky, even crash-prone; but polish comes with practice.

“It’s feng shui,” Jake said. “The terrain can keep you on your toes, but when it’s groove time, you put the pressure on, you flex and off you go,” he laughs.

Fast, tight edging marks Devin’s progress up the mountain while Jake’s mechanic is a series of face strides. Each style appears, in a way, effortless. And both Fellas are clearly enjoying the time of their lives, but perhaps most impressive is the vibe.

“That redhead ski bastard is adorable as hell,” Jake shakes his head. “And it’s growing.”

There happens to be a good population of telemarkers in the hills with Devin and Jake. Even as strangers, it is evident that each is connected to the other by an almost tangible friendly playground atmosphere. Devin and Jake laughingly throw out jovial profanity or encouragement. It is instinctively returned, like a recognized language. The distinct impression is that of a community; one who navigates a happy path through a snowy day on a mountain that doubles as a neighborhood.

Indeed, the simple and vital gravity that surrounds Telemark seems natural when one realizes the social bond that unites its inhabitants. It’s exciting. It’s inclusive. And there is every reason to suspect that he could save skiing from himself.