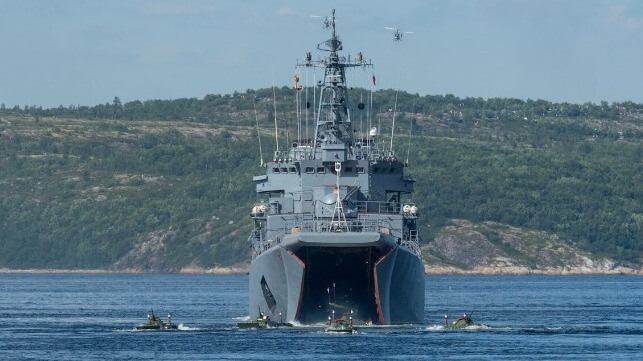 As the prospect of a full-scale Russian invasion draws closer, the Ukrainian government plans to ask Turkey to exercise its right to close the Bosphorus to warships.

Russia has moved up to 190,000 troops and support units to Ukraine’s borders, including field hospitals, ambulances, military police brigades and prisoner transport buses. The size and composition of the force aligns with US intelligence forecasts from early December, and US officials warn that the means necessary for a full-scale attack are now in place.

One element of the expected attack is a medium-sized amphibious assault on Ukraine’s Black Sea or Sea of ​​Azov coastline. Last month, the Russian Navy sent six tank landing ships to the Black Sea to join this invasion force, along with an additional Kilo-class submarine. These assets transited the Bosphorus from February 8 to 12 and are already in place for the invasion. The combined force deployed to sea for “exercises”, along with two repair ships – a class of vessel not normally required for maneuvers, according to analyst HI Sutton.

No further arrivals are expected in theater, but Ukraine still plans to ask Turkey to close the waterway to the Russian Navy in the coming days.

“We believe that in the event of a large-scale military invasion or the start of military activities against Ukraine – when the war becomes not only de facto but de jure – we will ask the Turkish government to consider the possibility of closing the Black Sea Strait for the aggressor state,” said Ukrainian Ambassador to Turkey Vasyl Bodnar.

The Montreux Convention of 1936 granted Turkey jurisdiction over traffic on the Bosphorus and the Dardanelles, and it limited the movements of certain classes of warships to and from the Black Sea. The convention allows Turkey to close the waterway to military vessels in times of war.

In addition to the force deployed in the Black Sea, a support force of Russian warships and submarines is deployed in the Eastern Mediterranean, including two of Russia’s three Slava-class cruisers. These Soviet-era missile platforms are specifically designed to target aircraft carriers, and a Pentagon official told USNI News that their presence — and the presence of a third in the Black Sea — is of concern to the USNI. American operations. Three NATO aircraft carriers, including the super carrier USS Harry S. Truman, are currently stationed in the Mediterranean.