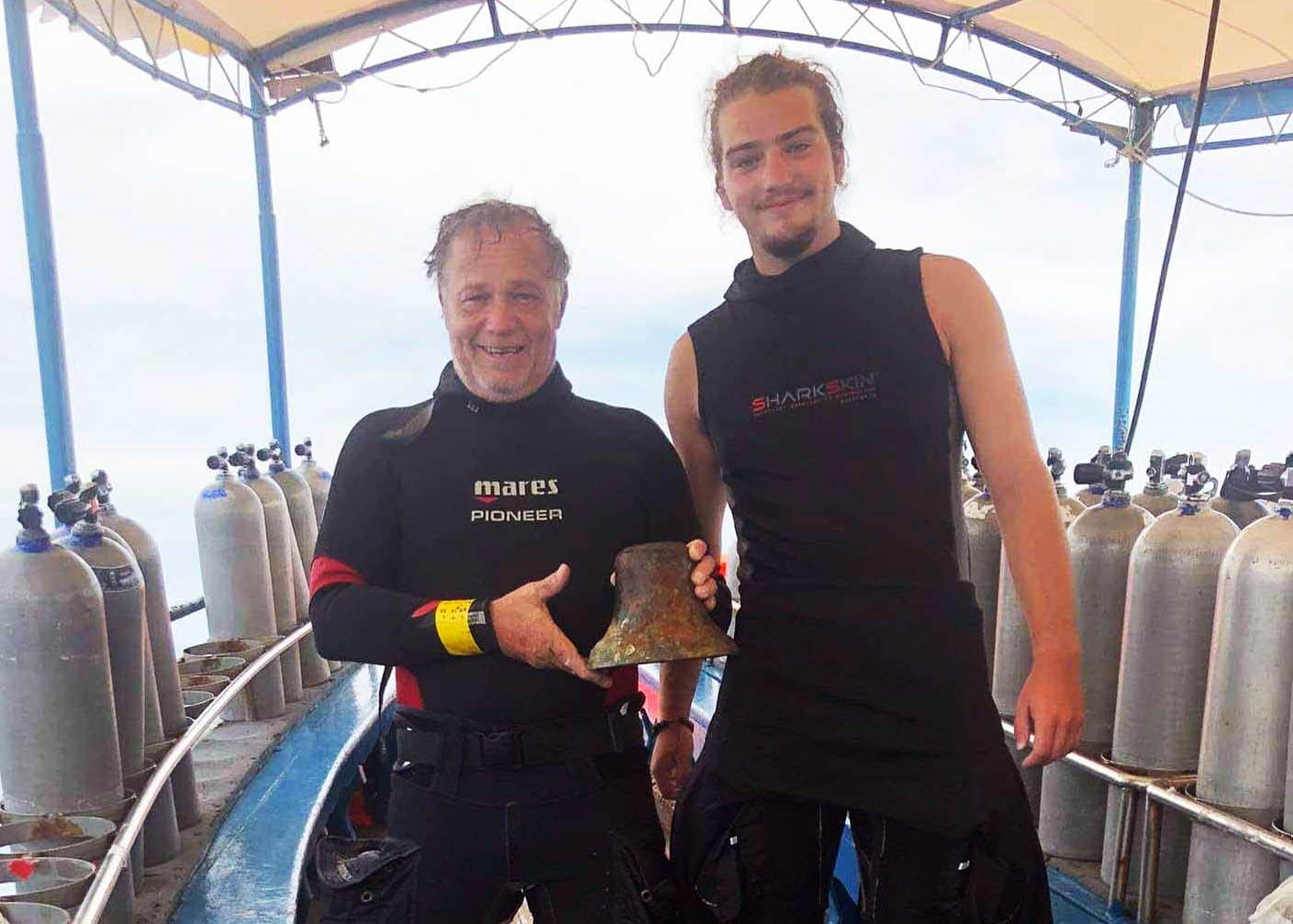 Thailand-based wreck hunter TIM LAWRENCE and his team of divers recently retrieved this artifact from a shipwreck, but he tells us: “I’m a little frustrated with this bell – aren’t they supposed to dispel the uncertainty?” Can anyone help fill in the gaps…?

Captain Kai, a South China Sea veteran, has spent the better part of 35 years offshore. After seeing firsthand the evolving effect of steam on commerce, he feels saddened by its impact and thinks poorly of what he sees as the milder sailors that steam has produced.

Kai prefers old school sailing men. Nevertheless, in this time of war, he must take all the crew he can get. The war has seen rapid changes in this remote corner of the world. The coastal trade is booming and it will continue to profit from it – if it can only stay afloat long enough.

Most experienced local sailors work on the larger Japanese freighters targeted by American submariners. So, with seasoned sailors few in number, Captain Kai must rely on local tradition to pass on his knowledge of the sea to his raw crew. He clings to tradition like the shadow of the yardarm clings to the deck of his 200-ton schooner.

So far the Americans have left the smaller ships alone, but if the rumors of casualties are correct, it’s only a matter of time before the coastal trade becomes a target on the enemy’s periscope. .

Eight bells ring on deck, a change of watch every four hours, with fresh eyes scanning the horizon for signs of the enemy. Kai takes a deep breath. The ship’s bell rings, reassuring and soothing in the night air. He studies the horizon one last time. The southwesterly offshore wind will soothe their sleep.

Siam was largely left alone. Unlike Burma, it benefits from the lucrative trade between Singapore and Bangkok. Kai’s ship, heavily oversupplied, might make a decent target. The Japanese are now on the defensive, his friends’ ships are fewer, and the bell brings another change of watch.

The pace of his ship, set as it has been throughout his working life, soothes his nerves.

Commander Scanlon commands his Balao-class submarine the USS Hawkbill at the depth of the periscope. With little power left in the batteries, he needs an area of ​​dark sea in which to surface and allow the diesel engines to run. The tide of war has already turned, but Japanese aircraft remain a clear and present danger.

Hawkbill (SS-366) was commissioned in May 1944. Intended to be named after the sea turtle, the “s” in “hawksbill” got lost somewhere along the way.

Cdr Scanlan surveys the surface to the northwest and sees a few small fishing boats coming from Chumporn. Eventually, he decides it’s safe to surface, and as the hatches open, the cool air shakes his crew. At the top of the turret, the captain revels in the monsoon breeze.

A few days have passed since Cdr Scanlon last attacked the infamous Japanese minelayer INJ Hatsutaka. The action had looked like revenge for the loss of his friends on the USS Lagarto. But bittersweet is the taste of victory – his crew are only halfway through the patrol and, after the intensity of this latest action, they seek a softer target to settle them.

A lookout raises the alarm and Cdr Scanlon looks through his binoculars. A two-masted schooner unwittingly closes the distance between them, heading for Singapore. He commands his command to dive to periscope depth and waits for the submarine’s next victim to approach.

The sun rises behind the schooner, making it easy to follow. Closing the distance, Cdr Scanlon looks at the sky before giving the order to resurface. The gun crew prepares the 5 inch deck gun.

On the schooner, the bell rings: everyone on deck! An extra sail is frantically unfurled and the ship changes direction to run with the wind in a misguided attempt to outwit its attacker. Cdr Scanlan salutes the schooner.

Cpt Kai, rudely awakened by the presence of the submarine, rushes to the bridge, realizing that his ship’s 8 knots are no match for the speed of the submarine. The war caught up with him.

Cdr Scanlan orders all hands of the schooner to the lifeboats. They push the oars and put some distance between themselves and their attacker. All they can do is watch the shells from the 5-inch cannon shatter the wood of the teak deck – then Kai’s beloved ship slowly slides beneath the waves.

The masts cling to the surface for what seems like an eternity. Then, in the blink of an eye, the schooner was gone.

A team of divers from Davy Jones’ Locker on the island of Koh Tao loads a 6m RIB. We act on the intuition that a slightly displaced vessel such as a 200 ton schooner loaded with light displacement cargo would not sink directly to the bottom of the western Gulf of Thailand but would drift with the prevailing wind, reaching the seabed slowly after traveling some distance from where it left the surface.

Researching wartime records, we have firm targets directly aligned with the southwest monsoon winds. The markers are to the northeast, and we were expecting a clear passage.

It’s a bright, calm morning, and we cover the distance quickly. Koh Tao is still visible as we reach the site. A fisherman placed a rope made of attached flippers every 3m above the wreck site, complicating our efforts to scan it effectively with the echo sounder. Nonetheless, we decide to enter and descend the palm rope, marveling at the schools of fish this feature has attracted.

We detected a slight rise on the sonar but we are not sure of its nature, given the many ripples on the bottom in this area. A thick thermocline at 40m complicates the search.

Fixing a distance line at 48 m, we run the line to the pre-marked 10 m on the spool and begin a circular search. In 1m visibility, looking in the dark, the sea plays with our imagination.

Resisting the temptation to chase the shadows, we manage to swing in an arc on the line of distance. Slowly pieces of plates and brass lamps begin to appear, before we spot a hollow filled with bottles and the remains of a ship’s cargo. Containing our excitement, we begin to search for clues as to the identity of the wreckage.

The first evidence comes from recovered beer bottles. Marked with English, Japanese and Chinese script, the words “Danippon Brewery Co Ltd” can be read. This Japanese company, as we will learn later, was established in 1907 and closed in 1949, so we are on the right track.

Large water cans, plates, gas lamps and bottles of fish sauce testify to the diversity of the cargo. We find no signs of engines, but what we do know is that the wreckage is directly aligned with this monsoon wind.

Eventually we surface after fulfilling our decompression obligation, confident that the wreck site is that of the schooner lost all those years ago.

However, we lack definitive evidence. Over the following years, we gradually enriched our knowledge. The wreck is 40 m long with a width of 5 m. It has a wooden hull and rises 4m above the seabed.

Poor visibility often makes our dives difficult. Disturbing sediment can reduce visibility to zero and increase the risk of losing the line, so we practice our line losing drills regularly.

Thirteen years have passed without any other clues being discovered. We go to visit the wreck site again, taking with us a new technical diver, Sam Bean, who is only 19 years old. Curious to see if time and the elements have discovered anything new, we slip under the waves and descend.

At the bottom, we attach our distance line and begin our slow journey around the mound of wreckage, regularly checking the depth to aid our navigation, our minds still tempted by the shadows.

There remains a part of the keel to facilitate our progress. Coming out of the murky water, a plate then another appears, part of this cargo destined for the Singaporean market.

Turning the dive, we return to our distance line along the remnants of the keel. Sam reaches out in front of him and pulls what at first glance appears to be a mundane object from the debris.

After finishing our decompression, we go back on the boat. I reach into the bag and pull out what is now the unmistakable shape that divers dream of: a bell.

Trying to contain our excitement, we transform the hardtail for dirt, and the next phase of our search.

The only letters we could make out on the bell are “GNO”. A researcher might be able to identify the mark, but even then it wouldn’t be definitive proof of this ship’s identity or whether it actually sank on May 29, 1945, as the war records are too vague. .

Neither HawkbillThe ship’s log mentions the size or type of ship he sank that day, although the scale of the wreck site certainly suggests a 200-ton vessel. My own belief is based on the lack of other brands in the area and clues from the cargo we salvaged – as well as my own experience of being on a similar displacement vessel that sank below me in the monsoon from the southwest!

On this occasion we had a 6m RIB in tow and marked the position when the vessel left the surface. We returned to the scene six weeks later, carried out a seven-hour search and located the wreckage just over 20km from where it sank – exactly in line with the monsoon winds . But that’s a story for another day.

The rest is just conjecture, and Captain Kai is my invention, but maybe someone knows if there was indeed a Kai who lost his ship here in WWII to a sub -American sailor.

TIM LAWRENCE is the owner of Davy Jones’ Locker (DJL), based on Koh Tao in the Gulf of Thailand, a center that offers divers the opportunity to expand their skills beyond recreational diving. Renowned technical explorer of wrecks and caves, member of the Explorers Club New York, he is a PADI / DSAT technical instructor trainer.