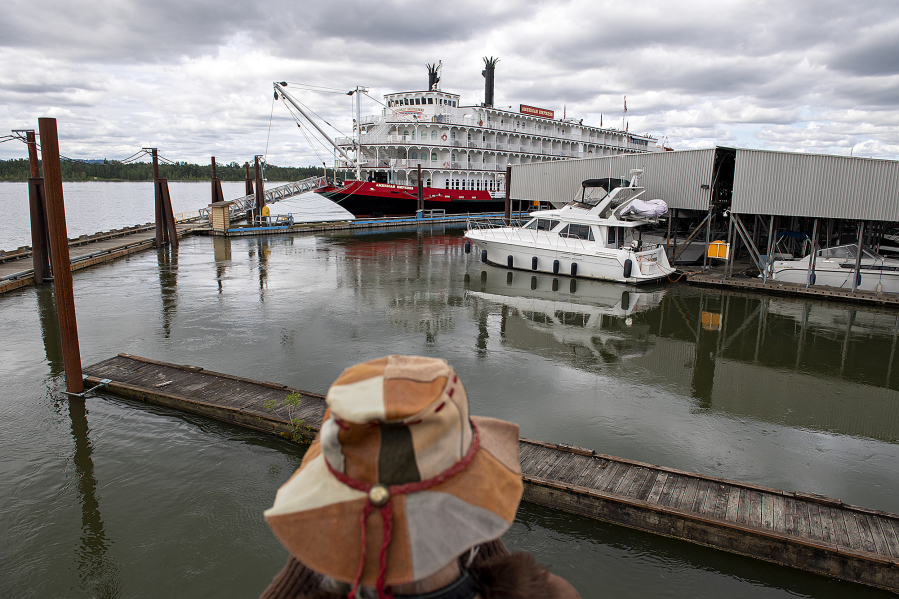 WASHOUGAL — Passenger Bonnie Westbrook had nothing but praise for the American paddle steamer Empress, which docked for the first time Wednesday at the Port of Camas-Washougal.

“The food is really good and the entertainment was better than expected,” Westbrook said as she and her husband, Wayne, of Henderson, Nevada, watched the festivities and ribbon cutting around the inaugural event.

The couple have been on many ocean cruises, she said, and the 360ft vessel compares favorably.

“Most old paddle steamers aren’t quite as comfortable, but the furnishings are nicer than the American Queen,” she said of the Empress’ sister ship, which features Victorian furnishings.

After the event, the Westbrooks and other passengers were to board three luxury charter buses for numerous shopping stops in Camas and Washougal. Passengers typically spend between $135 and $175 per stop, according to Derek Jaeger, commercial manager for the Port of Camas-Washougal.

Washougal Mayor Rochelle Ramos and Camas Mayor Steve Hogan said they couldn’t be happier, even though they only learned of the plans a few months ago.

“It’s a great opportunity to showcase our heritage as well as many of our businesses,” Ramos said.

Docking the boat at Parker’s Landing Marina every Wednesday and Saturday from 7 a.m. to 5 p.m. through November will not only be an economic boost for the area, but also a challenge, Hogan said.

“It’s up to us to make sure we have attractions that will be a boon to the riverboat,” he said.

The American Empress’ seven-day voyage on the Columbia River begins in Vancouver and includes a pre-board night at the Hilton Vancouver Washington. The boat then embarks for Astoria, Oregon, before returning with stops in Stevenson, The Dalles, Oregon, Richland and ending in Clarkston. After disembarking in Clarkston, passengers board buses for a road trip to Spokane, and from there return home.

Jaeger said the economic impact of docking boats at the port is huge, bringing about $2.3 million to cities.

“Our original plan was to buy just one boat, the American Queen,” he said. “We had just purchased the America Queen, it was our first week in operation, and I got a call from Chip Hannigan from the US Maritime Administration.”

Hannigan praised Wagoner for purchasing the American Queen, which had lain unused for several years, and for removing it from government hands and hiring a crew. Then he told Wagoner about a boat that had been in Portland for six years and said, “I want you to buy it.”

Wagoner said he didn’t have the money for the American Empress, and his wife Claudette said if he ever tried to buy another night cruiser, she’d “kill me in my sleep.” “. But he was able to secure the financing when he was allowed to sell tickets in advance after signing a binding purchase contract, and his wife eventually agreed.

Despite the boat’s economic impact, concerns have also been raised about the environmental impact of the diesel-powered vessel.

But Waggoner, who trained as a marine biologist, said he was doing everything in his power to mitigate the negative consequences.

“The boat is the first to use hybrid (technology),” he said, “and we are working on hydrogen.”

There will also be no single-use plastic on the boat and passengers will be given aluminum water bottles to keep, he said.

Although the boat can carry 223 passengers, Wagoner said, this trip has 160 passengers from as far away as Florida, New Hampshire and Iowa. After being introduced to this area on the paddle steamer, many will return, Wagoner said.

“This is a great trip to showcase the lower Pacific Northwest.”