The largest container ships in the world 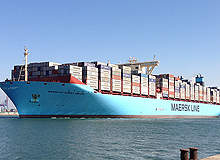 The MV Maersk Mc-Kinney Møller is the largest container ship in the world with a carrying capacity of 18,270 twenty-foot equivalent units (TEUs). She is the lead ship of Maersk’s Triple E class of container ships.

Triple-E vessels are propelled by a “twin-skeg” propulsion system incorporating two 30,000 kW engines and two propellers. The waste heat recovery system on board the ship saves about ten percent of the main engine power. The class emits 20% less carbon dioxide per container compared to Emma Maersk of Maersk E-class ships.

The CMA CGM Marco Polo is the first ship in a series of three 16,000 TEU Explorer-class container ships. It is one of the largest container ships in the world. Built by Daewoo Shipbuilding and Marine Engineering (DSME), the vessel was delivered in November 2012.

The Marco Polo entered service in November 2012, while her sister ships Alexander Von Humbolt and Jules Verne were introduced in 2013. The Explorer class vessel is 396m in length, 54m in beam and has a draft of water of 16 m.

The container ships are powered by an 80,080 kW Wärtsilä 14RT Flex 96 C engine driving a fixed-pitch propeller via a single shaft. The ships also incorporate the latest environmental technologies.

Emma Maersk is the first ship of the large Maersk E Series container ships. It was the largest container ship in the world when it was commissioned in 2006. Odense Steel Shipyard built a total of eight Maersk E class ships in Denmark for its client AP Moller-Maersk Group in 2006-2008.

The vessel is powered by the Wärtsilä 14RT-flex96C, the world’s first 14-cylinder inline engine. The engine develops a continuous power of 80,080 kW at 102 rpm. The vessel’s service speed is 25.2 kt.

CSCL Star was commissioned in January 2011. CSCL Neptune, the newest ship in the class, debuted in May 2012.

The “neo-overpanamax” ships were built at the Samsung Heavy Industries shipyard in Geoje, South Korea. The lead ship, the CSCL Star, has a deadweight of 155,470 t. Each ship can carry 14,100 TEUs. The ships operate between the Far East and Europe.

The CSCL Star is powered by a MAN 12K98MC-C diesel engine developing a maximum power of 72,240 kW. The propulsion system allows the vessel to cruise at speeds of up to 26 knots.

APL Temasek is the first in a series of ten 14,000 TEU vessels ordered by Singapore-based NOL Group. It is the largest container ship registered in Singapore. The second MOL Quest ship was delivered in March 2013, while the third and fourth APL Raffles and MOL Quality ships were delivered in mid-2013.

The container ship has a deadweight of 150,936 t with a monohull. The ship is 368.5m long and 51m wide. A number of innovations, such as a wider hull shape and an S-type long-stroke main engine with electronic fuel injection, are incorporated into the vessels.

MSC Danit is the first in a series of four large container ships built by Daewoo Shipbuilding & Marine Engineering for its client Dordellas Finance Corp. The ship is operated by the Mediterranean Shipping Company (MSC).

MSC Daniela is the first ship in a series of 13,800 TEU container ships built by Samsung Heavy Industries for the Mediterranean Shipping Company. It is one of the largest active container ships in the world.

The MSC Daniela was delivered in 2008. She has an overall length of 366 m, a beam of 51 m and a draft of 15 m. The vessel has a separate deckhouse and engine room for increased carrying capacity. The ship’s deadweight tonnage is 165,517 t.

A MAN B&W 12K98MC-C diesel engine driving a six-bladed Mecklenburger propeller provides propulsion for the vessel. The engine develops a maximum power of 72,240 kW, allowing the vessel to navigate at a maximum speed of 25.2 kt.

Umm Salal is the first of nine similar container ships built by Samsung Heavy Industries for United Arab Shipping Company (UASC). It is also the first A13 class vessel deployed by the UASC in the Middle East. The first and last ships in the series were delivered in April 2011 and May 2012 respectively.

Umm Salal has a maximum container capacity of 13,500 TEUs. It is equipped with three holds to transport dangerous cargoes. The ship is 366m long and 48m wide. The ship’s deadweight is 145327.9 t.

The container ship is powered by a Doosan MAN B&W 12K98ME7 main engine providing a service speed of approximately 25 kt.

OOCL Brussels is one of ten similar 13,208 TEU mega container ships built by Samsung Heavy Industries for Orient Overseas Container Lines (OOCL). The first ship of the class was delivered in 2013, while the last ship is expected to be delivered in early 2014.

The vessel is fitted with a MAN B&W 12S90ME-C9.2 main engine generating an output of 54,200 kW. The propulsion system allows the vessel to operate at a speed of approximately 23 knots.

Hamburg Express is the first ship of ten new 13,200 TEU class container ships built by Hyundai Heavy Industries for Hapag-Lloyd. It serves as the flagship of Hapag-Lloyd’s new container ship fleet. Deliveries of the 10 vessels are expected to be completed in spring 2014.

The Hamburg Express is powered by an 11-cylinder MAN 11K98ME7 diesel engine developing an output of 52,447 kW. The propulsion system provides a maximum speed of 23.6 kt and a range of 30,400 nautical miles.