The Islander: The wait is over and it’s definitely worth it!

The long wait is finally over, as this weekend Blue Bridge Hospitality will open the doors to its new restaurant, The Islander, at 1015 Orange Ave. It’s the place to be if you’re in the mood for delicious food or a creative drink. , featuring everything from draft beer offerings to fiery volcanic drinks and the gallon-sized Molokai Party Mule designed to be shared.

It’s been an arduous journey for David Spatafore, who designed the new concept after deciding to close Leroy’s Kitchen + Lounge. Toss in the pandemic, with all the delays and turmoil it has created, and he looked like a proud dad at the recent soft opening for friends and family we attended. Spatafore was involved in every aspect of the restaurant, from the fiberglass to the bamboo beer taps in his garage, to the installation of the rattan ceiling, to adding bamboo to the facade of the bar. , and so many other details. He even collected the many surfboards that adorn the ceiling. 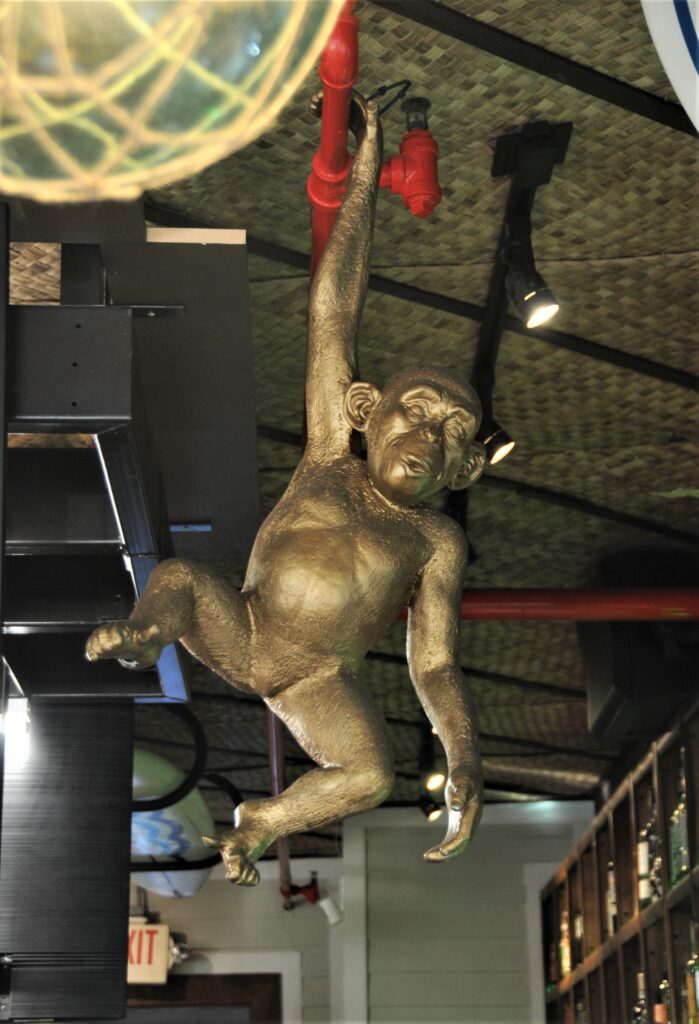 Many may remember the iconic golden monkey from the days of the West Pac Noodle Bar, and he’s back as surf monkey TJ, watching over the impressive new 21-seat bar. Ten televisions are strategically placed, to suit the tastes of each viewer, throughout the 120-seat restaurant. A lover of travel and good food, Spatafore has created a menu reflecting a range of dishes from the Pacific Ocean, surf hubs like Hawaii, Mexico, Costa Rica and of course Southern California.

We enjoyed great service and explored the offerings finding Pupus to start, including sampling the island fries with volcanic ketchup, which had a nice kick. A few other entrees include Black Sands Hummus with Vegetables and Taro Root Chips, Lava Flow Nachos, and Kalua Pork Sliders. The Tray Pupu is an easy way to sample sticky ribs, chicken satay skewers, Black Sands hummus, the much-loved West Pac spring rolls and spicy cucumber salad.

The menu continues with four ceviches, from Baja-style fish to Tahitian, or sample all four with the island’s ceviche sampler. Da Sweet Greens offers five themed salads, from Rincon Beet and Citrus to Hanalei Hippie and Todos Santos Tostada. We tried the delicious Grilled North Shore Shrimp Tacos and the grilled fish tacos, which come with flour or corn tortillas, black beans and fries. They also offer the popular Poke Tacos, Achiote Sweet Potato Tacos, and Chili Crunch Fried Chicken Tacos. The Tasty Waves section offers burgers, a Salt and Pepper Shrimp Roll, the Island Fish Sandwich, which was scrumptious, and more. We are happy to announce that the OG Leroy Burger is on the menu and better than ever. Starters include grilled skirt steak, market fresh fish, coconut seafood curry, fish and chips and Pineapple Fried Rice ~ which looked amazing served in a fresh pineapple.

Be sure to save room for dessert! Options include Da Moon Tropical Pie, Bonfire S’mores Cookie (which we thoroughly enjoyed and devoured), Ube Cheesecake or Hula Bula Pie, showcasing MooTime macadamia nut cream, Oreo crust and gooey fudge. We can’t wait to go back and try other tasty dishes, while soaking up the island vibe.

For early risers, The Islander also offers a Dawn Patrol window, open seven days a week from 7 a.m. to 11 a.m., serving coffee and espresso drinks like Ube lattes and Mexican mochas, along with local Bird Rock coffee and prime. Breakfast sandwiches, a two-fisted breakfast burrito, assorted flavored beach rolls and more will be available to enjoy. Another highlight is the weekend brunch from 9 a.m. to 3 p.m., Fridays, Saturdays and Sundays. The Islander will be open daily for lunch and dinner from 11 a.m. until last call. The Islander welcomes walk-ins, no reservations required.

It’s hard to miss the prominent and inviting bar, which was handcrafted from maple and mahogany by a Barrio Logan wood craftsman. Head to the bar for a range of Beach Buzz drinks, with an extensive menu including exotic creations with names like Staycation, Navy Jetpilot, Lava Flow, Bikini Martini, Booty on the Beach, Spicy Margaritas, Mai Tais (who received rave reviews from our table), and other offerings from south of the border. The real fun is in the group sips, which are concocted for sharing. The Gallon Molokai Party Mule is designed for four people, filled with ocean vodka, Fever Tree ginger beer, mint and pineapple. The Fiery Scorpion Bowl contains light and dark rum, vodka, pineapple and lemon juice, and orange. There is a huge range of draft beers as well as champagne and wines. Flavored lemonades like Maui Wowie Lemonade and Papeete Punch, which I found refreshing, are great alcohol-free options.

A lifelong resident and community supporter, Spatafore aptly named The Islander in part as a nod to his CHS years, where he met his wife Jenni and where his three children, Vinny, Gianna and Tony grew up. graduated. He is the manager of Blue Bridge Hospitality, which operates a diverse collection of Coronado restaurants, including Little Frenchie, Stake Chophouse & Bar, Village Pizzeria, Village Pizzeria Bayside, MooTime Creamery, and Liberty Public Market in Pt. Lome.