The forgotten visionary of the US Coast Guard 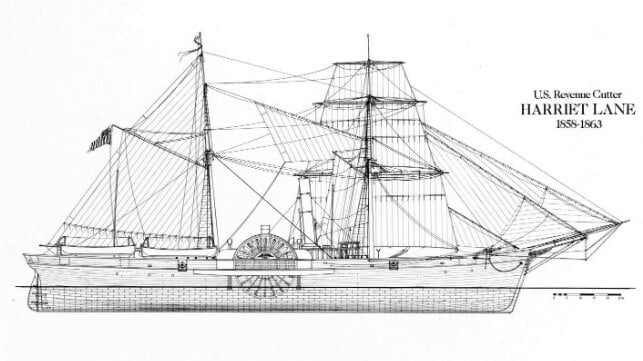 . . . [Captain] Fraser opposes an Under-Secretary of the Treasury, and the hostility of this official proves fatal to the captain’s long career: by an arbitrary abuse of power, the administration in 1856 summarily revokes his commission. Both indefensible and foolish, this action resulted entirely from personal animosity and cost the government one of the most far-sighted and loyal men who had ever sailed in the Revenue-Marine. – Stephen Evans, The United States Coast Guard: A Definitive History

As the quote above indicates, Captain Alexander Vareness Fraser, the service’s first commander, was a visionary and a man of character. During his four years as head of the United States Revenue Cutter Service, he did his best to professionalize and modernize the service. Many of his innovations were ahead of their time and took place decades after he tried to implement them.

Alexander Fraser was born in New York in 1804 and attended the city’s mathematical, nautical and commercial school. In 1832, he applied for a commission from the US Revenue Cutter Service. President Andrew Jackson signed his commission as a second lieutenant aboard the Revenue Cutter Alert. Fraser served as a boarding officer when the service ordered its cutter to Charleston during the infamous “cancellation crisis” in which South Carolina officials defied federal law requiring merchant ships arriving at Charleston pay fares. During this event, political tempers cooled and a national crisis was finally averted.

After the Cancellation Crisis, Fraser was offered command of a merchant ship bound for Japan, China, and the Malay Archipelago. Upon his return two years later, Fraser was appointed first mate aboard the Alert. Soon after, Congress passed a law allowing revenue cutters to sail along the coasts during the winter months to come to the aid of ships in distress. Fraser returned to New York before the cutters actually began this new duty, and he applied for it, taking command of the Alert when its captain was too ill to go to sea. He spent three years carrying out this mission, becoming the first cutter captain to carry out the service’s official search and rescue mission.

In 1843, Secretary of the Treasury John Spencer established the Marine Revenue Bureau to centralize authority over cutters within the department and appointed Fraser to head the Bureau. As head of the department, Fraser handled all financial, material and human matters concerning the revenue cutters. During his first year in office, he compiled statistics and information for the service’s first annual report, and he banned the use of slave labor aboard the Revenue Cutters. He instituted a system of promotion for officers based on merit by examination before a council of officers. He also began the practice of regularly rotating officers to different stations to familiarize them with the country’s coastal areas. He tried to improve the morale of the enlisted force, increasing the pay of non-commissioned officers from $20 a month to 30; however, he also prohibited the consumption of alcohol aboard the cutters. He regularly inspected lighthouses and attempted to merge the Lighthouse Board with the Marine Revenue Bureau, a merger that finally took place nearly 100 years later. With the construction of the Legare class cutters of 1844, Fraser introduced iron-hulled and steam-powered service. However, these hull materials and driving force were experimental at the time and the new cutters proved unsuccessful.

In November 1848 Fraser completed his four-year term as commandant. For his next tour, Fraser has requested command of the new cutter CW Lawrence on a maiden voyage that would round Cape Horn bound for the west coast. This voyage placed him at the helm of the first revenue cutter to sail the Pacific Ocean. The Lawrence arrived in San Francisco almost a year after leaving New York, and during this odyssey Fraser took it upon himself to train his officers in navigation and seamanship, much like the Revenue Cutter Service School of Instruction after his founding in 1876. Unfortunately, all of these trained officers resigned their commissions when they reached California to join the gold rush.

On the San Francisco station, Fraser had an exhaustive list of missions to perform with a crew exhausted by the bait of gold. He not only enforced tariffs and interdicted smugglers, he provided federal law enforcement for San Francisco, relieved merchant ships in distress, and surveyed the new state’s coastline. Fraser had a busy time with 500 to 600 ships at anchor in San Francisco harbour, many with anarchic crews. There were no civil courts to assist in law enforcement, so Fraser did his best to enforce revenue laws while helping ship captains suppress mutinies.

After completing his mission on the West Coast, Fraser returned to New York. There he was suspended and investigated on the charge of administering corporal punishment in San Francisco. The deal was unsuccessful, so he retained his captaincy in New York. In 1856 New York merchants decided they needed a new cutter because the port had become such an important trading center. Fraser favored construction of a vapor barrier and traveled to Washington to lobby for new construction. Congress has allocated funds for the vapor barrier Harriet Lane, considered the most advanced steam-powered warship of its time, which later rose to prominence in the Civil War.

Because Fraser had lobbied Congress directly without Treasury Department authorization, his commission was revoked in 1856. He went into private business in New York as a marine insurance agent, but he retained a sincere interest in military service. He sought reinstatement during the Civil War, and in 1863 President Abraham Lincoln signed a captain’s commission for Fraser. At this point, however, personal matters arose and Fraser unfortunately declined the nomination. He died in 1868 at the age of 64 and was buried in the famous Green-Wood Cemetery in Brooklyn.

Alexander Fraser introduced the service to professionalization, new technologies, and moved a reluctant service to reforms and innovations that would take place long after his death. As first commander, Fraser’s foresight and thought leadership set the Service on a path of growth and modernization. He was a true sailor, a visionary and a member of the long blue line.

This article appears courtesy of The Long Blue Line and can be found in its original form here.

The views expressed here are those of the author and not necessarily those of The Maritime Executive.