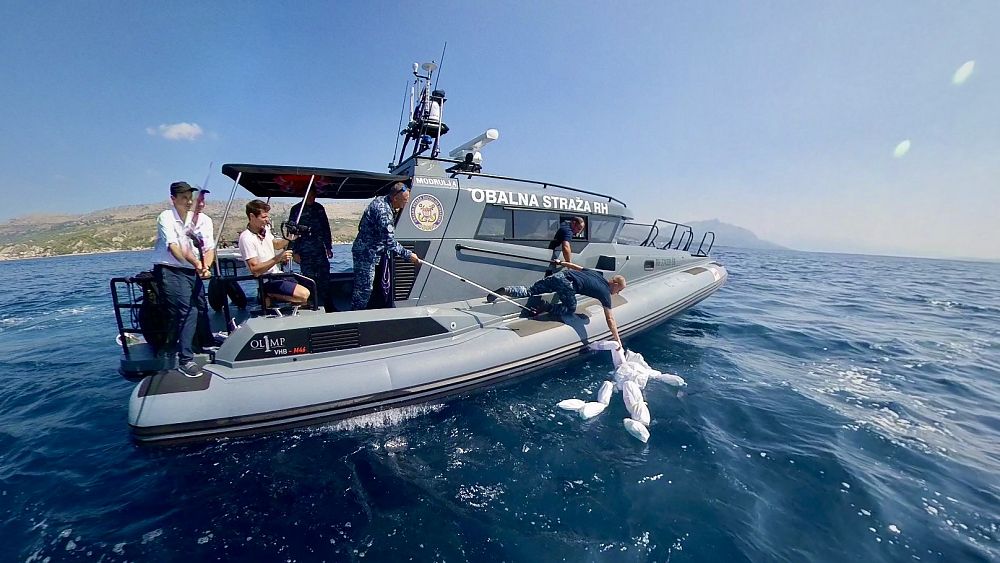 European coastguards face many risks in keeping our seas safe. Good coordination in an emergency can mean the difference between life and death. To continually improve their skills and effectiveness, rangers participate in regular drills such as COASTEX.

A distress call by radio alerts maritime rescue centers: two ships have collided near the town of Divide, taking heavy damage. The emergency is deadly: witnesses saw at least one crew member fall overboard and disappear into the sea. Civilian search and rescue boats rush to the area, asking the Navy to provide immediate assistance.

Direct cooperation between state agencies is helping the coastguards of European seas to counter the rise threats – both old and new.

Although the exercise scenario is fictitious, the crew members operate as if it were real, because they know this kind of accident can happen at any time, and they must be prepared.

Croatia is a magnet for maritime tourism and the Coast Guard responds to dozens of real-life incidents of this type each year.

The Modernizing Navy of Croatia

The country is modernizing its coastal patrol fleet, building a series of new ships. The speedboats used in the exercises are among the fastest in the Mediterranean Sea. They were financed by European funds.

Equipped with high-tech cameras with powerful zooms and infrared vision, the Croatian Coast Guard can now search for people lost at sea even in the dark. Until recently, this was impossible.

“In the old days, ships would use radar and binoculars to locate missing persons. However, this could only work during daylight hours. When night fell, the teams could only rely on radar, which was a problem because a person in the water is not visible on radar.

Vessels involved in search and rescue should cease operations and wait until dawn and sunrise. But now we can continue the operation all night because we have a camera that sees in the dark,” he says.

According to the training scenario, the ship’s collision caused a fuel leak. It is removed by a specially equipped vessel provided by the European Maritime Safety Agency. EMSA works in tandem with two other EU agencies, EFCA and Frontex, as well as all European coastguard agencies, within the body that organizes the COASTEX exercise.

EMSA’s primary responsibilities are to enhance maritime safety and security and to prevent Pollution. The organization, headquartered in Lisbon, was founded 20 years ago following the Erika and Prestige tanker disasters.

“Oil pollution response is always at the heart of our business at EMSA. We have 16 oil sorbing vessels chartered across Europe, which are ready to complement the efforts of national authorities in the event of hydrocarbons Pollution“, says Maja Markovčić Kostelac, Executive Director of EMSA.

The organization also serves as a Europe-wide database of all ships at sea: it centralizes information collected by EU coastal member states to track the approximately 150,000 ships in European waters every day.

Maritime data: from the fight against oil pollution to the regulation of fishing

The European Maritime Safety Agency makes its data available to national authorities, so that each country maritime the services can intervene quickly if necessary.

“It’s a huge volume of information. This information is used for many different purposes – search and rescue, pollution control, border control, shipping security and security, but also for the control of fishing.

We research the vessel and all relevant information relating to it – what type of gear is the vessel carrying? Based on this, we can better understand the behavior of the ship. For example – is it normal for this vessel with this type of gear to be fishing in this particular area?”

The SafeSeaNet system operated by EMSA provides real-time, up-to-date information on vessels in a country’s waters. If, for example, a fishing vessel appears to be operating illegally, the information is passed on to national authorities, who can then investigate the vessels involved.

Save money and time on fishing control

To ensure that these measures are consistent and fair across EU waters, the European Fisheries Control Agency (EFCA) is working to harmonize fishery controls.

This includes exchanging experiences through joint missions: inspectors from many countries work together on board EFCA’s iconic ship “Lundy Sentinel”, which also took part in the exercise in Croatia.

“We are working with Member States to ensure harmonized and effective control of fishing. This saves money, but also saves time. We all have limited resources, and this makes us much more effective,” says Susan Steele, Executive Director. of the EFCA.

In this part of COASTEX, a boat was spotted fishing in a restricted area. After the intruding vessel was intercepted and secured for inspection by the Croatian Coast Guard, an EMSA camera drone took off from the EFCA patrol vessel “Lundy Sentinel”, confirming that it is safe to sending the multinational EFCA team to carry out the inspection: an example of practical coordination between the national coast guard and European agencies.

From saving lives at sea to containing oil spills and fight against illegal fishing: the chances are better when national coast guard services and European agencies join forces against common threats.