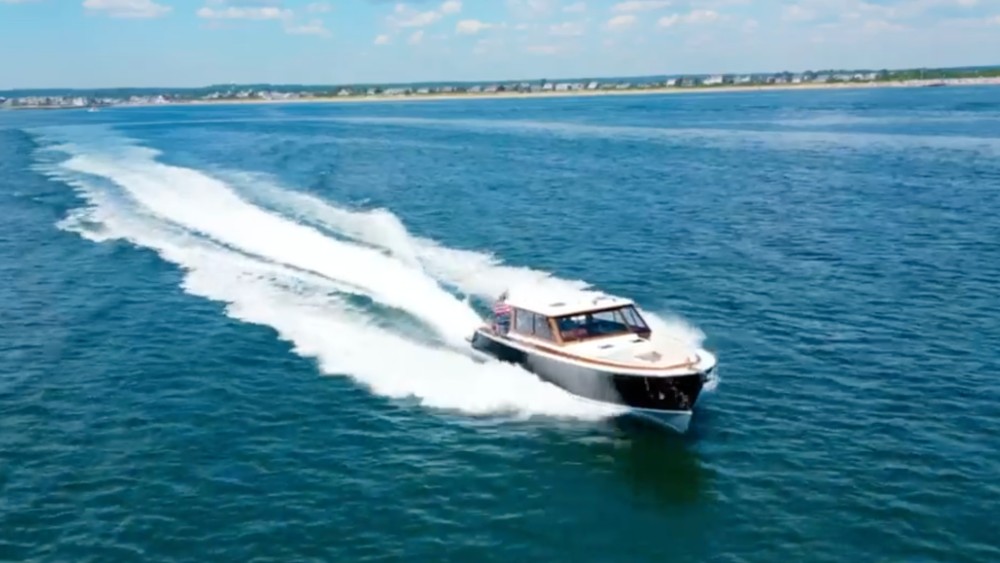 Marrying a bowrider to a classic New England cruiser amounts, at least in the case of the Daychaser 48, to a new approach to dayboat design. Barton & Gray’s salty 48 was launched last night as the club seeks to diversify its fleet.

The 17-year-old yacht club, with annual memberships starting at $39,500, has built up a fleet of nearly 70 Hinckleys in 30 ports across the country. He used those 36-44ft to introduce most non-boaters to the water, enhancing the Hinckley experience with a captain and concierge service.

And while Hinckley is considered by many to be America’s most stylish weekend getaway, it doesn’t always fit Barton & Gray’s business model of one- to five-hour cruises.

The Daychaser’s large cockpit and swim platform are designed to accommodate groups.

“There was too much wasted space, especially in the cabins, because the members don’t sleep there,” said co-founder Doug Gray. Robb Report. “Because we are a commercial company, US Coast Guard regulations have also required us to retrofit many boats, which is expensive. These regulations often prohibited our members from riding on the bow.

This meant that groups of up to 12 had to huddle around the captain at the helm or huddle together in the aft cockpit, leaving around half of the boat’s space unused. The best solution: An elegant open-bow ship resembling a classic cruiser that, in disguise, is a functional day boat.

Gray pitched the concept to a few boat builders who “had us laughing at the piece,” he says. “At that point we realized we had to do it ourselves.”

The deep and open bow, creating a large social space, is rare on a 48 footer.

Well, not exactly. The team worked with naval architect Doug Zurn on the concept and contracted manufacturing to Boston Boatworks, which has built production boats for high-end brands like MJM as well as styled motorboats for several resorts.

There have been Covid-related delays, but the first Daychaser 48 is now in New York waters, with plans to use it, and a second 48, at its locations in Florida over the winter. Gray expects to receive ten more this year, including eight based in the Bahamas.

What’s so unique about the design? As mentioned, the Daychaser combines the elegance of a Hinckley-esque cruiser with the bowrider concept. The navy blue hull and ubiquitous teak and mahogany roots her firmly in New England tradition, but the open bow is a first for this style. The second feature of note: the 550 hp Hamilton jet thrusters (jet thrusters helped make the Hinckley Picnic Boat an instant icon). The jets not only improve maneuverability, but allow the boat to get closer to beaches without worrying about propellers.

Barton & Gray took inspiration from their Hinckley fleet and gave the boat an elegant wooden interior.

Most dayboats these days are based on center consoles, derived from deep-sea fishing boats, while a few others have cruiser origins and tend to be a bit crowded on the tops.

This boat is different. Zurn has done a good job of defining social areas for multiple guests, as Barton & Gray requires for its members, including the large bow area. “At some point, I expect all 12 guests to be in front,” he says, “so we used a really big design.” The door and windows leading aft have also been highly engineered to keep the helm and cockpit dry while the boat is in motion.

The Daychaser also has a cockpit galley, a bar with two stools, a table and separate lounges and a double pilot seat. Everything is dressed in wood. Usage boils down to being a sleek party platform, so careful attention has been paid to creating more nooks than you’d find on a typical 48ft for storing food, bottles and accessories. other sundries for island picnics or sunset cruises.

“Most of the meals will be self-prepared, so we also designed large fridges and freezers,” says Zurn. The swim platform aft also offers excellent access to the water, with more storage for water toys.

Despite the focus on the top, the 48 also has a cabin with a single berth, toilet and shower, and even a table to work on. “We wanted to create a space that doesn’t look like a boat, but provides people with solitude and privacy,” says Zurn.

Unlike Zurn’s other models, this day-tripper will spend most of its time cruising between 8 and 20 knots, so it doesn’t need to be a speed demon. This allowed the designers to widen the beam to nearly 15ft for more space, although the boat weighs a third less than the similar 48ft. The team had to design to Coast Guard requirements, which was difficult in some cases, but added safety to the overall design.

Essentially an open platform with a covered midsection.

Will it be a revolutionary boat? Maybe. Over the past decade, time-pressed boat owners have moved away from cruisers towards day boats. This Daychaser, with its woody, salty lines, could be the start of a trend towards larger, more luxurious dayboats targeting a more affluent market than center consoles reach.

Beyond member use, Barton & Gray plans to sell individual Daychasers for $2.59 million, which includes a full management program.