The 62m schooner Athos has completed an extensive refit 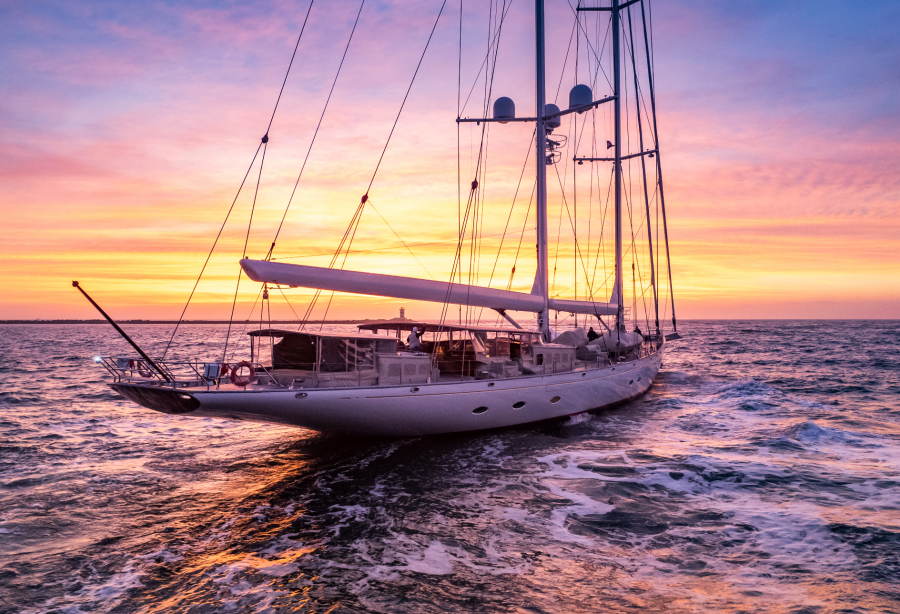 Schooner Athos has been extensively transformed – outside and inside – updated and optimized by Huisfit in Amsterdam. Prior to acquiring the 62 m designed by Hoek, built by Holland Jachtbouw Athens (2010), the new owner chartered her for a year. He fell in love with the boat but saw many ways to optimize it to improve amenities and user experience. As the project evolved in his mind, the refit list grew.

The aft overhang will be lengthened and, on deck, the cockpit fittings will have to be redesigned and a new forward navigation deckhouse will have to be added. New booms, new sails and carbon rigging would ensure better sail handling and performance. All systems needed to be updated. A considerable part of the interior had to be replaced or reconfigured and updated.

Hoek Design has again been involved in all the naval architecture work to adapt to these changes, the interior styling and layout of the new owner’s cabin, one of the guest cabins, the main saloon, the new area crew service and the navigation deckhouse. Peter Mikic Interiors was responsible for the layout and styling of the main deckhouse and the overall guest interior design.

Athos the stern has been lengthened by 1.25 metres. Yet the concave and convex curves of the new section required exceptional skill in the design and construction of the aluminum structure in order to fit perfectly into the aluminum hull. The extension, with a relocated pushpit, provides a new two meter sunbathing area behind the owners’ private cockpit.

The cockpit itself has been reconfigured for easier access and has additional amenities including a fridge and ice maker. The interior layout and furnishings of the owners’ deckhouse have been brought up to date. As a finishing touch, the new stern section has been completed with a beautiful teak transom.

The main cockpit and deckhouse, aft of the main mast, have been extensively modified to provide a true social hub for meetings and greetings, alfresco dining and relaxed leisure activities.

The new cockpit is wider and longer and can comfortably accommodate 12 people. There is also an informal seating area for guests to gather in small groups or find a quiet nook to enjoy a read. The coffee tables are flexibly designed to adapt to become coffee tables or dining tables. A bar with fridge and ice maker has been installed. Just aft of the main cockpit, redesigned instrument panel consoles sit to port and starboard of the ship’s rudder.

The main deckhouse floor has been raised to one level and provides an improved outlook. The entire interior, including the nav station, was removed and a new design fitted. The deckhouse looks a lot bigger, the circulation is better and the natural light has improved. A new, classic-looking bar has been built to port and a sofa takes up nav station space, while smaller dining tables and casual seating maximize flexibility.

Further forward, the former crew companionway which provided access to the crew quarters has been replaced with a third, larger deckhouse designed and designed in the same style as the other deckhouses.

This houses a new navigation and secondary helm station and provides additional social space for the crew and access below. At the same time, the new design of the crew deckhouse has improved the flow rate of the engine room ventilation system and significantly reduced the resulting noise.

The owners’ suite has been completely stripped down, redesigned and refurbished. An extra porthole was made on each side and thus wasted space was eliminated to make full use of the unused space. There are now two bathrooms instead of one and a new walk-in closet. Hardboard has been replaced with subtle fabrics and the plank floor has been carpeted to create a warm and tranquil ambience.

Everything inside the hallway that connects the guest cabins has been renewed – new walls, new floors, new carpets, even a new chandelier! The biggest change in this area was the replacement of the original curved staircase leading to the main deckhouse with a beautifully designed and space freeing new staircase.

The galley to port, behind the new wall, has been custom rebuilt and all fittings updated for modern haute cuisine practices. A hostess station has been added, which means there is more room in the kitchen for the chef.

Other upgrades include brand new navigation, alarm and security systems and new lighting throughout. All the automatons have been changed and the pumps upgraded. All guest spaces benefit from a state-of-the-art communications and entertainment package. The main tender has been completely rebuilt and there is a new second tender. The bottom of the hull was sandblasted down to bare aluminum before full painting.

Royal Huisman is a Dutch shipyard established in 1884 in Ronduie, which builds and refits bespoke luxury sailing and motor yachts at its shipyard in Vollenhove, the Netherlands.