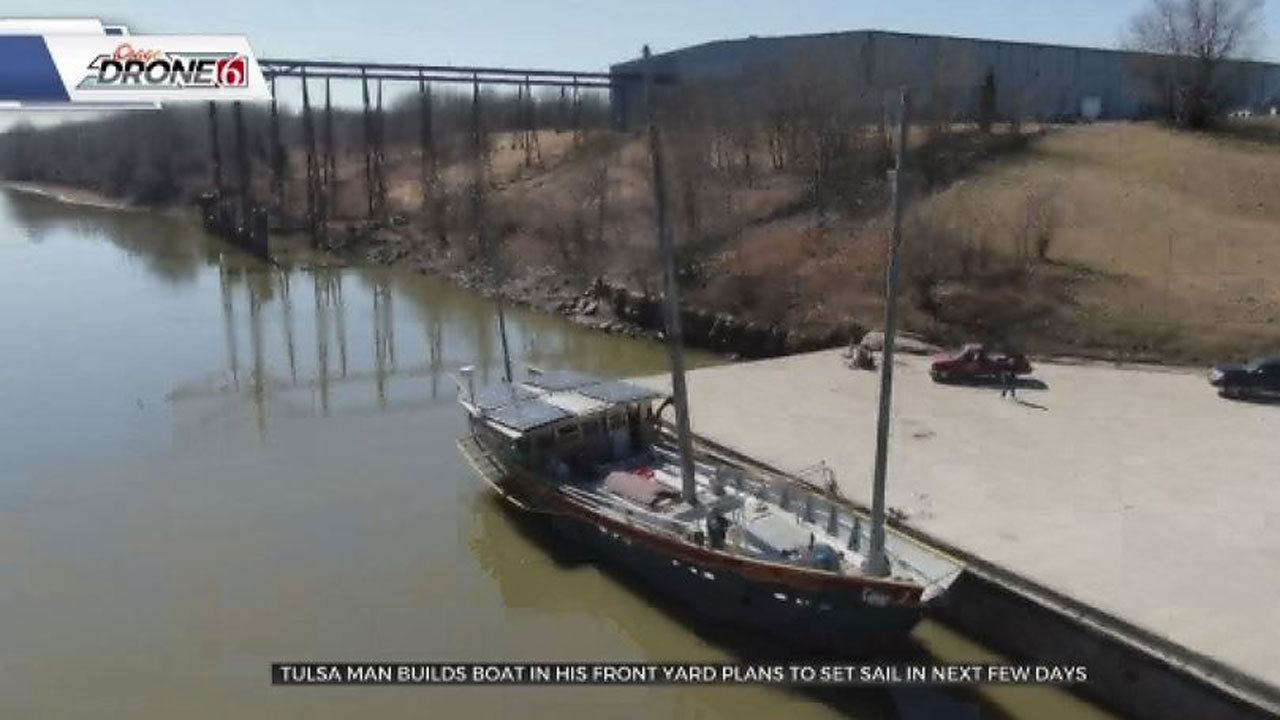 A boat built in the front yard of a Tulsa man will set sail in the next few days.

Doug Jackson has been building the 74-foot-long steel vessel, called “SV Seeker,” for over 10 years. It will be heading for the Gulf of Mexico in less than a week.

Jackson has spent most of his life working behind a computer in a cubicle. Now he’s about to set sail in a boat he built in his front yard.

“I had an apartment in my house and we’re building this thing in my front yard, and I’ve learned so much from so many people with so many skills and trades,” Jackson said.

Jackson calls this project “The Boat the Internet Built” because he documented his journey through hundreds of YouTube videos.

Jackson asked people across the country for advice and some even came to help, like Greg Cotton.

“I was on I-35 quite a bit for work, so on the way home I would usually stop for a few days and work on the boat,” Cotton said.

Greg is from Minnesota and met Doug through a group of subs.

He was a submarine in the navy, flew planes and now he’s trying his hand at the water.

Greg turns 75 this month and says this project keeps him young.

“About 20 to 25 percent of my high school graduating class have already left and the rate is going to increase,” Cotton said. “So, I must continue!”

Doug and his team combine different experiences and skills to create a ship like no other.

“She’s double keel,” Jackson said. “She’s a rigged Chinese junk and she’s a motor sailor. I mean, she has a motor downstairs for repulsion.”

One of the motors was from an old school bus. The dragons on the outside of the boat were made of polystyrene. Quotes on the wooden floor panel were paid for by YouTube subscribers.

Because the boat was mostly built by people who gave their skills, labor and parts to make it happen, Jackson wants to use the boat to give back.

Once it reaches the Gulf of Mexico, he plans to use it as a free research vessel for students or anyone who wants to come aboard.

“So we think like a student starting a graduate program or something and needs to watch some jellyfish or bottom sediment or something incredibly boring but no money to get a boat” , Jackson said. “We are the boat.”

Over 10 years of hard work with thousands of dollars invested are finally paying off with the adventures ahead of us.

“You won’t take any of this with you when you die,” Jackson said. “Those are the experiences we get.”

Jackson said they plan to head to Muskogee Harbor on March 8. It will then head towards the Gulf.