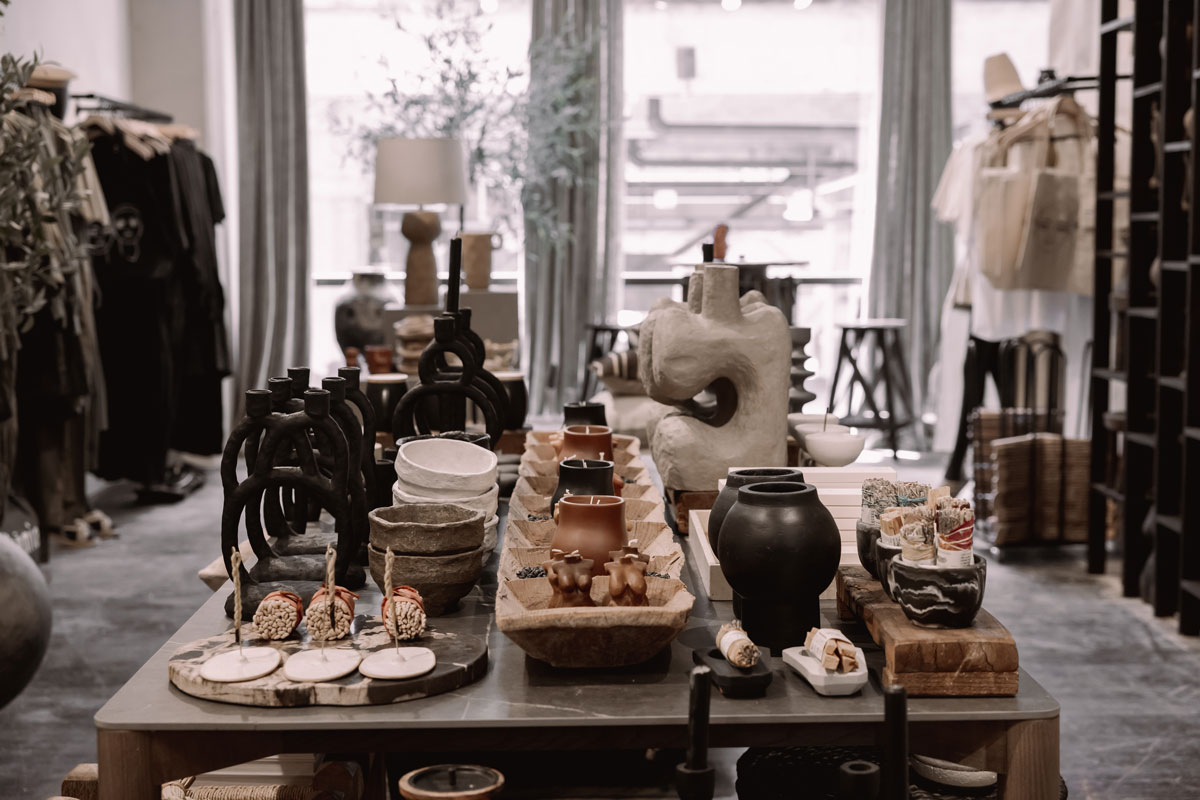 To cross the threshold of Souk Bohemian (called Souk Bō’hēmian), the brand new shop of Ponce City Market, is to be transported to the other side of the world. Whitewashed walls and low tables evoke the arid climates of the Maghreb, while Moroccan singers beat in French through subtly concealed loudspeakers. The store’s palette is an elegantly muted range of earth tones, but the products for sale are full of textile diversity, from goat hair slip-on mules to rounded incense holders carved from soapstone. On one wall, dark stained wooden shelves display a dizzying selection of handcrafted ceramic vessels, each with an air of distant glamour.

That’s the idea, co-owner Vanessa Coore Vernon said during a recent visit to the store. The doors to Souk Bohemian had just opened a few days before, but customers were already pouring in – one of the many benefits of having a permanent location in a busy market. Vernon and his co-owner, Morgan Ashley Bryant, are also best friends: Both originally from Northern California, they met in Atlanta while working at retailer Anthropologie and shared a dream of starting a creative business. The pair launched Souk Bohemian as an online marketplace in 2016—”With just one sweatshirt!” Bryant recalls laughing. As a company of two black, queer women, Vernon and Bryant had no idea how things would turn out. But since that first solitary sweatshirt, Souk Bohemian has flourished.

Their name, they explained, evokes the junction between the overall style and the individual expression of the brand. Vernon, who looks after the company’s conservation, had previously traveled to Morocco to source carpets, where she was dazzled by the sprawling and colorful open-air markets known as souks. Souk Bohemian fuses the aesthetics of these namesake markets with elements of free-spirited style and design.

“Everything here is to be touched, looked at and explored,” Vernon said of the store. “It’s like you can travel without a passport.”

Bryant handles business operations, but the two partners source merchandise for the store, an eclectic process that spans the globe. Merchandise is spinning: on a recent visit, one was able to browse hand-woven caps from Ukraine, ready-to-wear linen sets from Bali and century-old ceramic vessels from Turkey (one vessel of two hundred years old, standing sentry in front of the lodge, had been authorized for export by the Turkish National Museum and was not for sale. “She is our lucky charm”, Vernon said fondly). The goat hair mules, which Bryant spotted on Instagram, were the work of a Moroccan craftsman who spoke little English. To source the shoes for sale in the store, he and Bryant set up the business details through the WhatsApp translator. “It was difficult to translate European and American sizes,” Bryant said. “But we get it!”

Souk Bohemian also produces a line of branded clothing, with designs by a small roster of black female artists. They change models regularly, Vernon and Bryant explained, but you will always find minimalist portraits of black and brown faces: Souk Bohemian is above all inspired by and for women of color.

“It has to be our image and that of our client, it’s everyone, but our main clients are black women,” Bryant said. “They are the reason we are here.”

This dedication to its core customer base, along with Souk Bohemian’s lush, world-spanning aesthetic, made it an attractive tenant for Jamestown Group-owned Ponce City Market. That said, securing a permanent store in the coveted mall was no small feat. When Vernon and Bryant pitched for a spot, they won over several members of the Jamestown team, who fiercely defended them in a process that lasted months.

Ponce City Market has a long waiting list of potential tenants, and smaller independent brands are struggling to compete with giant retailers like Nike, which opened one of its iconic ‘Live’ stores at Ponce City Market in December last. “These (brands) have the funds to say, ‘Whatever you ask, we’ll double it,'” Bryant said. She and Vernon credited Jamestown associate Toni Williams for helping them convince skeptical superiors that a small boutique owned by two queer black women — with no physical experience and no conglomerate financial backing — was a worthy addition to the building. . Ultimately, they said, the brand’s genuine focus on black female customers – a consumer base whose influence and gargantuan buying power has only recently been recognized – gave them the kick-off. inch they needed to secure a permanent space.

The launch of the new store required everyone to be on hand, both to raise funds and to fit out the space. Their place on the second floor had been vacated by Onward Reserve – a boutique aimed at what we might call the cosmopolitan sportsman – when Souk Bohremian moved in; the walls were still festooned with multiple pairs of wood. Vernon and Bryant enlisted family, friends and partners to help transform the space into their North African-inspired vision.

“When we say this space was built by the people we love, it was literally, physically,” Vernon said.

Although this store is their first foray into physical retail, the reception has been great so far. “It was really nice to have people who don’t know us, and they’re like, Oh my God, the smell, the music!“said Vernon. “It’s incredible.”

As the co-owners chatted about the long road that led them here, new customers poured in through the wide-open doors. “This is such a cool store!” exclaimed a young woman reading slate gray linen shirts to a Souk Bohemian crew member, who happened to be Bryant’s friend Kim. “You’re going to be very successful here.”