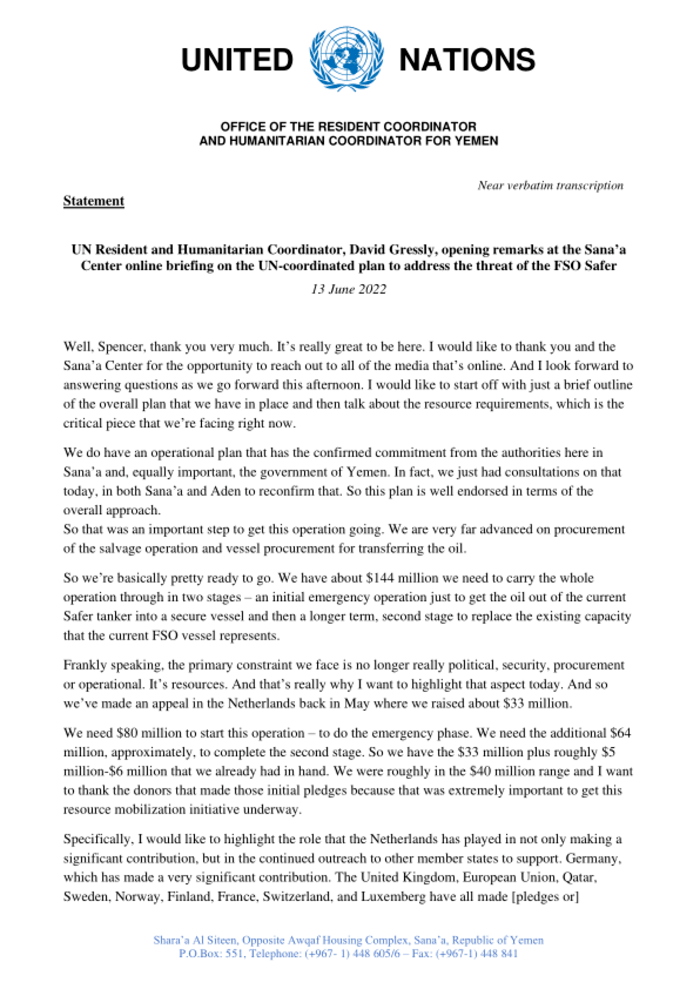 I would like to thank you and the Sana’a Center for the opportunity to reach out to all the media that are online. And I look forward to answering questions as we go along this afternoon. I’d like to start with a quick overview of the overall plan we have in place and then talk about resource requirements, which is the critical element we’re facing right now.

Well, Spencer, thank you very much. It’s really great to be here. I would like to thank you and the Sana’a Center for the opportunity to reach out to all the media that are online. And I look forward to answering questions as we go along this afternoon. I’d like to start with a quick overview of the overall plan we have in place and then talk about resource requirements, which is the critical element we’re facing right now.

We have an operational plan that has the confirmed commitment of the authorities here in Sanaa and, equally important, of the government of Yemen. In fact, we just had consultations on this today, in Sanaa and Aden, to reconfirm this. This plan is therefore well endorsed in terms of a global approach. It was therefore an important step to launch this operation. We are very advanced in supplying the salvage operation and in supplying the vessel for oil transfer.

So we’re almost ready to go. We have approximately $144 million that we need to complete the whole operation in two stages – an initial emergency operation just to get the oil out of the current Safer tanker into a secure vessel, and then a second longer term step to replace the existing capability which the current FSO vessel represents.

Frankly, the main constraint we face is no longer really political, security, supply or operational. It’s resources. And that’s really why I want to highlight this aspect today. And so we launched an appeal in the Netherlands in May where we raised around $33 million.

We need 80 million dollars to start this operation – to do the emergency phase. We need the additional $64 million, approximately, to complete the second stage. So we have the $33 million plus about $5 million to $6 million that we already had on hand. We were roughly in the $40 million range and I want to thank the donors who made those initial pledges, as it was extremely important to get this resource mobilization initiative off the ground.

Specifically, I would like to highlight the role that the Netherlands has played not only in making a significant contribution, but also in continuing to reach out to other Member States in support. Germany, which made a very important contribution. The United Kingdom, the European Union, Qatar, Sweden, Norway, Finland, France, Switzerland and Luxembourg have all [pledges or] contributions that have brought us to this point. And, more recently, the United States as well as the Kingdom of Saudi Arabia pledged an additional $10 million each, which brings us to around the $60 million threshold of the initial $80 million we need to raise. to start the operation. Our discussions with other donors for the second stage are well underway. We are therefore optimistic that we will increase funding for both stages in a timely manner. But let’s focus on where we are today and how we can close the current gap. And that’s really what I want to highlight because we’re launching a fundraising campaign on social media that will open tomorrow [14 June]. It is important that we let the public know that we really need to get this funding.

So we have for the [emergency operation] a gap of about $20 million and we really need to increase that as soon as possible. We are still in a good period for the operation, but by the time we get to October, November, the environment to carry out the operation becomes more difficult. More importantly, it is because of the nature of the winds and currents which increase the chances of this ship, which is old and decaying, breaking up. It would be the most risky moment in fact. So we really want this to happen quickly.

We’re trying to get to that $80 million figure by the end of this month, it’s doable, but it’s going to take a push and that’s why we’re calling on the public to help us cross the line. finish to get it first $80 million up.

$20 million is really not a lot when you look at the overall cost of this disaster. If there was indeed a spill, the estimates we received for the cleanup alone would be $20 billion. Investing another $20 million today to save $20 billion seems like a very easy business case to make. A return of $1,000 on every dollar invested. But that $20 billion is just the cost of the cleanup. This is without counting the other costs that will affect the region.

Disruption of international shipping would have a major cost – costing huge sums on a daily basis. We saw it with the recent incident of the Ever Given when it ran aground – how that had an impact. That potential is there. If there is enough pollution in the shipping lanes, it could have a significant impact. It will certainly have a significant impact on ecosystems. The Red Sea is known for its pristine environments, which would no longer be so after such a spill. Red Sea reefs and mangroves could be affected. It could take up to 25 years to restock the fisheries.

But of course, Yemen, currently in conflict, would be the most affected.

Fishing communities would be devastated with perhaps up to 200,000 jobs lost overnight. This industry supports more than 2 million people, directly or indirectly. Entire families would be exposed to pollutants. Millions of people would be forced to breathe more polluted air. The ports of Hudeidah and Saleef would be closed. It is these ports that supply the majority of Yemenis with food, whether commercial or humanitarian aid, but also with fuel and other vital products. 17 million Yemenis already do not know where their next meal will come from, even under the current circumstances with the opening of ports.

There is too much at stake to allow that to happen. And we are so close. We just need to close this gap and we can start this operation. As I said earlier, we need about $144 million to complete the whole operation. We need $80 million to get it started, to run the emergency operation, and then we’ll work on the long-term replacement capability.

As I mentioned at the beginning, the political will is there. We reconfirm this periodically. They are actually anxious for us to start. We see no real obstacles to moving forward from this front. We just need funding, as I say again. We are close, but we are not there. Every day that passes is another day that we take a risk, a chance that this ship will break and the catastrophe I have described will occur.

We need to act. As I mentioned earlier, as we move into October, November, December, the odds of this happening will be considerably higher. So we’re running out of time.

That’s why today I’m announcing a social media fundraising campaign to help us close the gap. We call on the global public and not just Member States – the global public to fund a quarter of the remaining gap. It would be $5 million for this emergency operation. $5 million is a lofty goal for this type of campaign, but given the stakes, I think it’s a goal we should be aiming for.

It is important to note that every dollar that the public puts forward in this operation sends a message to all other Member States and private companies, foundations that have not yet contributed or could contribute, that they must also act now before let it not be too late.

The campaign will be located on the UN website at un.org/StopRedSeaSpill.

I basically call on the public as well as the Member States to help us close this gap, start this operation and save a catastrophe which is not just a probability or a possibility, but a certainty if we do not act. It’s not just a question of when. It’s not a question of if. Let’s do it now, if we can.

Thank you very much for your time, attention and support. Thanks.