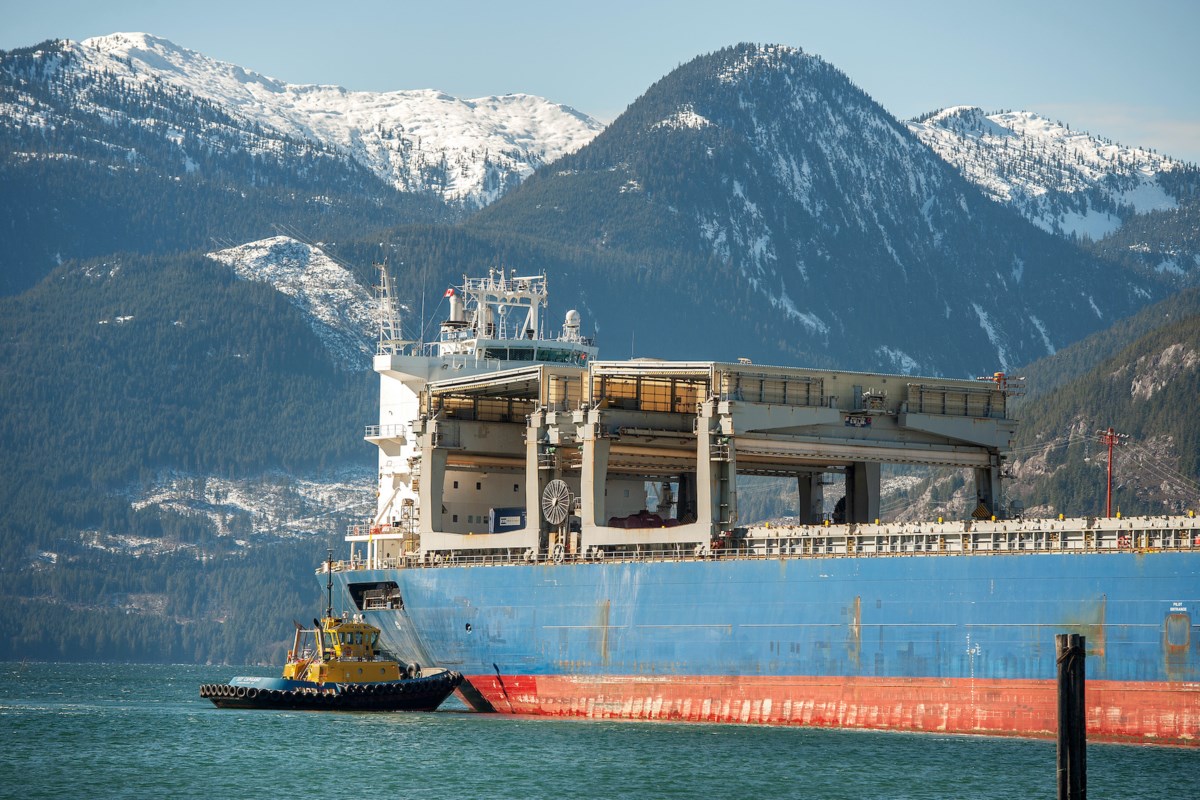 The port has seen many changes in its 50-year history, but it retains a community atmosphere, say longtime employees.

Although originally incorporated on November 5, 1971, the port began operations in October 1972, with the first ship arriving on November 19, 1972.

The first ship carried about 3,500 metric tons of wood pulp – its main commodity in 1972 – or about 3.5 million kilograms. That’s almost the same weight as 127 medium-sized humpback whales.

And that’s only on one ship.

Fast forward to 50 years later, and the terminals have become a mainstay at the end of Third Avenue in Squamish, often with huge ships carrying massive amounts of cargo.

But even with all that extra freight over the years, Squamish Terminals has maintained a strong sense of community among its employees.

Ron Brown currently works for the terminals as a foreman, but his port journey began a long time ago.

He got his start at the terminals as a casual worker in 1990, while still in high school.

“I basically started because my dad was already a longshoreman,” Brown said, adding that his dad was also a foreman.

Brown’s grandfather was a longshoreman who worked in Vancouver.

“I was third generation and I was lucky to start here,” he said.

Brown said he spent years working as a foreman alongside his father, until his father retired about a year and a half ago.

“He had his moments, but mostly good ones,” Brown said with a chuckle.

And although her father retired not so long ago, the job continues to bring in family.

“It’s a generational thing, and now my son has started,” Brown said.

His son has just started, so he doesn’t have a lot of work. But Brown said they worked side by side, just like he and his own father.

The port didn’t run in Sarah Tichauer’s family like Brown’s, but she was always very grateful for the community she gained throughout her 18 years in accounting administration.

“I’ve carried some of those friendships that I’ve made in the office here over the past 18 years,” she said. “I still maintain those relationships, so that just underscores how supportive and great this workplace is.”

“It’s really a team mentality, and everyone supports each other fully,” she said. “We try to do things in the community and in the office that maintain that team mentality as one big group working together.”

Although there is no data available on the number of employees working in 1972, the terminals today have 240 employees. According to the director of customer service and community relations, Greer Richardson, most of the employees are residents of Squamish.

“I met with my co-workers and some of the foremen, stevedores in the community,” Tichauer said. “I also like going to a local bakery or restaurant and everyone you talk to knows someone who worked in terminals, had a family member and has nothing but great things to say about it. what we do for the community.”

The biggest changes since its creation

One of the biggest changes in the terminals’ 50 years of existence is the type of cargo it carries.

“When I started, it was about 99 percent wood pulp,” Tichauer said.

“You name it, and we brought it,” she laughs. “So, it’s been really interesting to watch that.”

“We’ve changed dramatically,” Brown said. “When I started, we had paper here that we no longer have and a lot of wood pulp, mostly forest products.

“It has become a big change in steel import.”

“This year will be a banner year for Squamish in terms of steel import volume handled,” said Dave Lucas, president of Western Stevedoring, the terminals’ parent company.

“It leans more towards a general-purpose terminal for import and export,” said Paul Morris, terminals manager.

Another recent change is the acquisition of the terminals by Western Stevedoring in 2018.

Prior to the acquisition, Lucas called Terminals a friendly competitor, but said the companies’ merger worked rather seamlessly.

“It was a great cultural fit with the Squamish team with our Western team,” he said. “Very similar values ​​and just a really good cultural fit.”

“We are one team now and a team that works very well.”

Since the acquisition, Lucas has retained oversight of the terminals and recognizes that the record steel import for this year required a lot of effort from everyone involved.

“From my point of view, [I’m] extremely proud of our team and what they have been able to accomplish in handling record volumes of importing steel, which is an extremely difficult commodity for our operations staff, our staff in our office and in the hand -work,” he said.

“Extremely proud of what we were able to accomplish and they exceeded our expectations.”

Overcoming the wharf fire in 2015

Although the terminals worked like a charm for a few years, a huge fire broke out on the site in 2015, which eventually clouded Squamish in thick, black smoke.

“The town center became quiet as the heavy smoke prompted people to close windows and stay indoors,” Squamish Chief staff wrote in April 2015. “Some people seen at the outdoors wore masks as they cycled or strolled downtown plume, which reversed toward Howe Sound when the winds changed direction around 10 p.m. that night.

A shelter-in-place alert was issued Thursday evening of the fire by the District of Squamish, and by Sunday the fire was 100% contained. Fortunately, no one was injured in the fire, although one person was treated in hospital due to the smoke.

For some time thereafter, the terminals operated with a single berth. From what Morris heard about the incident, it showed the crew needed to be innovative.

“It really made them think outside the box to make sure they were providing good service to customers coming through the facility,” he said.

Tichauer and Brown were both working at the terminals at the time of the incident, but neither was supposed to be working the day the fire broke out. But both acknowledged that the team and the community needed to pull themselves together after the incident.

“I know there was an incredible number of community members and people who came together and worked extraordinarily hard to make sure we got through this,” Tichauer said.

“I remember the challenges that followed,” Brown said. “Working with a berth with the number of ships trying to get in and out was really difficult for us.”

“It was difficult when they were building the berth, just moving the cargo around,” Brown said.

Despite the challenge, they succeeded.

“But we succeeded,” he said. “We worked pretty hard on it, and the shipping companies really liked what we were doing at the time and supported us.”

The future of terminals

Celebrating 50 years is a milestone for any organization. But when it comes to the future of Squamish Terminals, what are they looking at and planning for?

It’s hard to plan for the next 50 years, but when it comes to the next five years, Lucas said they’ll have to watch for ongoing changes in the industry.

“Obviously, we still have our eyes on the forest industry and what’s to come over the next five years, because there are likely structural changes to come,” he said.

Lucas also noted that there is a province-wide shortage of port lands, so terminals may have opportunities arising from this.

Morris first reflected on the incidents that took place due to global issues and how terminals reacted.

“Over the past two years,” he said. “What happened because of COVID and the atmospheric rivers and what happened to our transportation systems, I think Squamish Terminals really rose to the occasion and helped the global market.”

As such, Morris believed the future for the terminals would be bright, with the port able to “contribute to the global vision of global freight transport”.

Ultimately, Lucas said they will strive for quality and hope to continue contributing to Squamish as much as possible.

“We are looking to continue to provide excellent service to the industry to ensure that we maintain the level of activity that we have today,” he said. “We are proud of our place in the Squamish community and the contributions we make to it.

For Brown, he just hopes the community recognizes the positive impacts of terminals.

“I just hope the community sees the value in Squamish [Terminals] and how much cargo we actually transport.