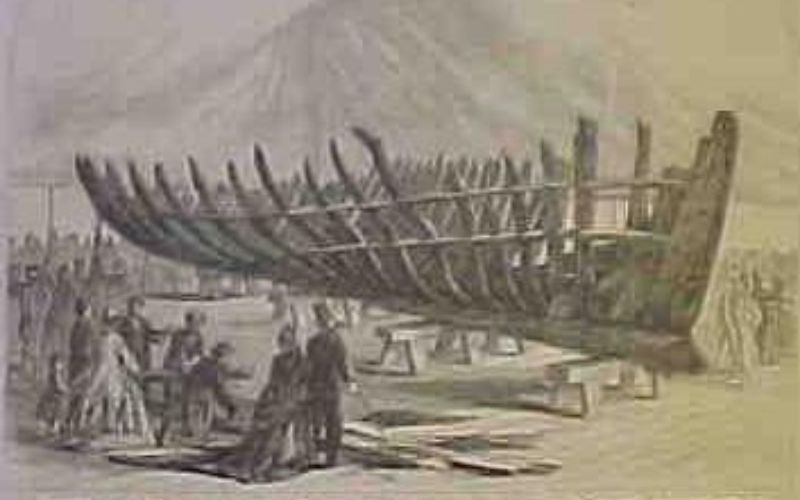 A team of Massachusetts scientists have examined the antlers from a famous shipwreck in a bid to prove the antlers belonged to a 17th-century ship that brought Irish indentured servants to America.

The Pilgrim Hall Museum in Plymouth has investigated the woods of a shipwreck known as the ‘Sparrow-Hawk’, which was discovered in 1863 after a storm revealed the site of a former harbor at Orleans and Chatham .

Museum scientists are trying to prove the long-held theory that the Sparrow-Hawk is the remains of a ship bound for Virginia in 1626 that eventually brought the first documented Irish settlers to New England.

The ship ran into trouble during a storm off Cape Cod and her passengers and crew were rescued by members of the native Nauset Nation and taken to the new settlement of Plimoth.

Indentured servants spent nearly a year in the colony before traveling to tobacco plantations in Virginia to fulfill their contracts.

Donna Curtin, executive director of the Pilgrim Hall Museum, told the Boston Globe that the 109 timbers of the Sparrow-Hawk wreck were assembled into a skeletal hull many times, while they were also disassembled , measured, drawn and exposed.

“A big question haunted this assemblage of salt-worn woods,” Curtin told the publication. “Are they, in fact, from the same ship described by William Bradford that brought the first documented Irish settlers to New England?”

Museum scientists have confirmed that the antlers belong to the oldest known shipwreck in English Colonial America, publishing their findings in the Journal of Archaeological Science on March 11.

Curtin said the museum hopes to “move beyond speculation into the realm of probability” by finding evidence that links the Sparrow-Hawk to the 1626 ship.

The wreck caused “enormous curiosity” when it was discovered in 1863 and was widely displayed throughout the region before being acquired by the Pilgrim Hall in 1889.

The museum sent the antlers to a Cape Cod museum on loan before they were returned to Pilgrim Hall in 2011 and put into storage.

They stayed there until four years ago, when Calvin Mires, a research associate at the Woods Hole Oceanographic Institute, began analyzing them with new techniques developed in Europe.

A research team attempted to date the antlers and determine their origins and narrowed down the list of possibilities considerably, although they were unable to definitively link the antlers to the 1626 ship.

The study found that the antlers originated in England and dated back to the late 16th or early 17th century.

The research team was also able to paint a picture of an older vessel, around 40 feet long, which would have been somewhat unsuitable for an ocean crossing.

Curtin said the poor condition of the ship highlights the desperation of some members of the European working class to improve their situation by embarking on a dangerous journey to the new world.

The 1626 ship bound for Virginia included two English merchants, farmers, and indentured servants, many of them from Ireland.

Curtin said the new research has enabled the museum, which will open for the first time this year on April 1, to display the antlers in the future. Curtis said the museum would aim to create a portrait of the ship’s passengers and study the impact of their time in Plymouth.