Roaring Bellows and Burning Sparks: The Last Blacksmith of the Grand Banks 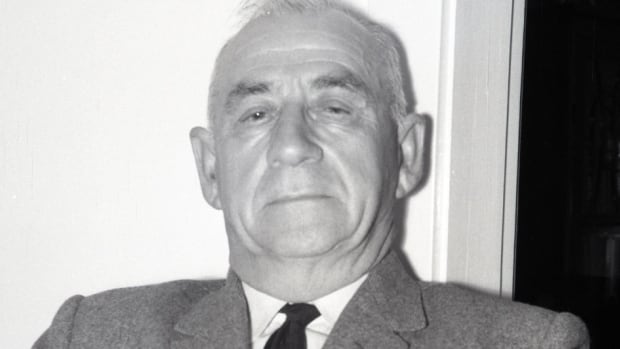 Under a spreading chestnut tree
The village forge stands;
The blacksmith, a mighty man is he,
With large, muscular hands,
And the muscles of his muscular arms
Are strong as bands of iron.

Children returning from school
Look at the open door.
They like to see the blazing forge,
And hear the bellows roar,
And catch the burning sparks that fly
Like straw on a threshing floor.

One of the great memories of my childhood at Grand Bank in the 1950s was “looking through the open door” (split door – the lower half was usually closed) and watching the sparks fly as blacksmith J. Wilson Osborne worked diligently in his forge. .

As we teenagers watched, he spat on his anvil, held a red-hot piece of metal on it, and with all his might hit the hot metal with his big hammer.

It made such a noise that it scared us. He stood there with a big smile, enjoying the moment.

J. Wilson Osborne began learning the blacksmith trade in 1913 when he was just 13 years old. He went into business 10 years later and retired in 1968, some 55 years after starting as an apprentice to blacksmith George Harding.

The year he retired, I interviewed this largely self-taught man who, for the last 10 years of his working life, was the only full-time blacksmith on the entire south coast of Newfoundland.

He was born in the small community of Hoop Cove, Long Harbour, in Fortune Bay on January 28, 1900. He did not attend school until his family moved to Grand Bank when he was 10 years old. Just three years later, he went to work with Harding in his forge and remained in his employ for nine years.

In 1923 he married Laura Kirby of Kirby’s Cove and moved to nearby Collins Cove, Burin, where he went into business on his own – at the time there was another blacksmith working there – returning to Grand Bank five years later to open his own. to forge. A few months later, Osborne decided to join forces with blacksmith William Wood and bought him out in 1941.

Blacksmithing is one of the oldest crafts known to man. The book of Genesis, chapter 4, verse 22, refers to the opening of Tubal-cain “the first foundry forging implements of bronze and iron”. It is not known when the first blacksmith arrived in the New World, but most large ships on long voyages had a blacksmith on board, and English merchants who built trading stations in Newfoundland brought their blacksmiths with them.

The first record of a blacksmith on the Burin Peninsula was William Harding, who in the spring of 1826 wrote in his diary that he had been sent to William Fox, a businessman at Rock Harbour, to work in his workshop blacksmith and his store. Harding married and moved to Burin, and it was from his grandson, George Harding, that Osborne learned the trade.

In the early 1900s, “every port in Newfoundland where ships were built or operated had a blacksmith shop,” Osborne said. “The same applied to the other Maritime provinces and the New England states.”

When he began learning the trade in 1913, there were several blacksmith shops on the south coast of Newfoundland: Haystack, Marystown and Burin in Placentia Bay, as well as Grand Bank, Garnish, Belleoram, Harbor Breton, Milltown, Ramea, Burgeo and Port aux Basques.

“We made horseshoes and shod the horses, put iron bands on the horse-drawn carriages and iron shoes for the sleighs, railings for the cemetery plots, axes, pickaxes and feet deer,” Osborne said.

In the spring, Grand Bank would become a hive of activity.

“As of early April, the bank schooners would begin fitting out for shoal fishing with men arriving from Trinity, St. Mary’s, Placentia and Fortune bays,” he said. “At one time there were up to 30 banking vessels off the Grand Banks employing up to 25 men each, and for each vessel there were 10 women employed in salting fish with more men using horses and carts carrying the fish. During those days there were up to 60 horses here.”

As part of the fishery, they had to make trawl anchors, granpnels, hand gaffs, dip irons, and trap anchors.

“When I started working, there were only sailboats,” Osborne explained. “Men’s lives depended on the quality of the work done, so the blacksmith had to be well trained.”

John Price went to work with Osborne full-time in 1958 when he was 15.

“I made thousands of horseshoes and shoed hundreds of horses in the seven years I worked there,” Price, now 78, recently told me. “When we made the iron strips to put on the wagon wheels, we would take them to the nearby stream, where we would heat them, place them on the wagon wheel, and then throw them in water to cool them.”

Most of the tools blacksmiths once used were made by them, Osborne explained. There were many types of pliers, when he retired he had over 30 pairs, he said.

“We also made our own punches, chisels and other tools that we needed,” he said. “Things have changed so much over the years – when I started we used old leather bellows whereas now we have a motorized fan. If you wanted to punch a hole in a piece of iron you had to with a hand-turned drill and make the drill do it – now it’s an electric drill with electric motors and factory-built drills.”

As well as being well trained, Osborne said, the blacksmith also had to run his own business.

“He had to be able to tell the size of a piece of iron, whether round, flat or square, without using a ruler. All the welds were done by hand, heated over a coal fire, and you had to know how the different types of iron would withstand heat and blows.”

The late 1940s, which saw the end of the schooner bank fishery and the arrival of more vehicles in the area, brought about changes in the type of work Osborne did; instead of wooden schooners there were steel dredgers, and trucks replaced the horse and cart.

“Now there are big chunks of iron to straighten, repairs and some parts to make – for the truck, springs, bumpers and repairs to U-bolts, knees and many other things” , he explained.

“The blacksmith’s workshop where the children used to look through the open door and see the sparks flying has almost ceased to exist. Many things the blacksmith made, such as chains, chains and hinges doors, are now factory-made and mass-produced.

It was not just a place of business, he said.

“The forge was not only a place where people came who wanted the work done, but also a place where older men gathered to swap stories, and many great ones were told and heated arguments developed. .”

Price recalled his time working with Osborne, pumping the bellows by hand.

“A lot of old people came in every day to sit and spin and watch us work, especially in the winter. Major George Wheeler of the Salvation Army came by a few times a week and before he left he said a prayer.”