RETRO: The Wild History of the 1982 Eagle Aviation Flyer IndyCar 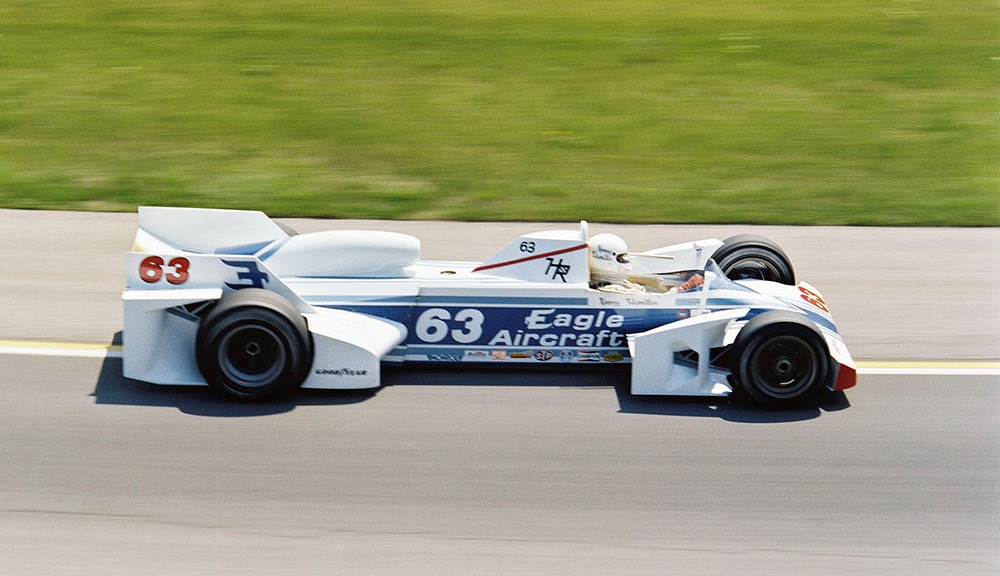 Where in the world do we start the conversation about Ken Hamilton, the Eagle Aviation Flyer DW2-Chevy V8, Hamilton’s son, Davey, the 1982 Indy 500 and the legacy of one of the craziest machines for doing laps at the Indianapolis Motor Speedway?

Before we get to the main story, let’s start with where the inspiration behind the exceptionally weird minivan came from.

Ken Hamilton’s first attempt at the Indy 500 came in 1981 in an old mid-’70s Chevy-powered Riley chassis purchased by veteran racer Roger McCluskey. Despite the car’s age, the short-track oval racer from Idaho dreamed big of tackling the big 2.5-mile Speedway and passed the rookie orientation program. A few days later, his Indy debut would be cut short.

“In 1981 they had the biggest field, not just of cars, but about 80 potential drivers and 115 entries,” Hamilton said. “I lost one engine and by the time I got the other engine back I missed qualifying so I didn’t make it that year but my car was quite fast.

Despite the setback, Hamilton’s spirited attempt to race in the Indy 500 drew considerable attention back home to Boise.

“Nobody from Idaho even thought about doing it,” said future IndyCar star Davey Hamilton, who was 18 at the time. “And he was doing it more as a hobby; he still had a business and a job, trying to make it happen. It created a lot of energy around Idaho, and so the gentleman who owned Eagle Aviation contacted him and said, ‘Hey, I’d like to help you. What’s it gonna take?

“A multi-millionaire, Joe Turtling, owned a bunch of Caterpillar dealerships and stuff across the country and he had a designer and an engineer to build him a dust plane,” Ken Hamilton said. “It was called an Eagle biplane. And talking to Joe, he said that Dean Walker could design a race car for Indianapolis, and he would get involved and pay to have one built if Dean could design it and build it.

With its recent acquisition of Eagle Aviation, Turtling saw a chance to promote its new venture through The Greatest Spectacle In Racing. The car would eventually wear the same corporate colors as its marquee biplane. A trip to the 1981 CART IndyCar Series season finale at the Phoenix One-Mile Oval in November rocked the 1982 Eagle Aviation Indy 500 schedule.

“They were talking about buying a car at the time, like a [Penske] PC-7,” said Davey Hamilton. “So they went to Phoenix that year and [Walker] started looking at cars, and he was a pretty smart guy, obviously, who built one of the best crop spreaders. I can’t remember what made it so special, but it was really good for a dust collector.

Although it was a few years old in 1981, copying the championship-winning Penske PC-7 would have been a smart move for Walker.

“I remember they were taking pictures of [a PC-7] with his hand near the race car to get the scale of what it was all about,” Hamilton continued. “He actually carved a 1/8th scale car out of wood. It looked like a [Penske] PC-7. And then the problem is that he kept cutting… he kept cutting and kept cutting. And then very soon he came up with this [DW2] pattern.”

Walker wasn’t the first person with aviation or aerospace experience to get involved in the design of an Indy 500. He might, however, be the first to apply his expertise in spraying various chemicals. from a low-flying plane to create an open-wheel racer to tackle the world’s most famous Speedway.

And where Walker used his very specific dusting expertise to create the DW2, Hamilton did the same by bringing what he knew best to the project. Remove all of the car’s bodywork and you’ll find plenty of items borrowed from one of his non-winged sprint cars.

“That’s how I ended up with this [DW2]”, continued Ken Hamilton. “[Walker] was a very good airplane designer, but not really a racing car designer. So he designed it, Joe paid the money, I provided all the suspension and all the stuff on the thing, and the engine, the transaxles…”

Manufactured and assembled in Idaho, the DW2 was born in the same building where Walker’s esteemed crop spreader, the DW1, came to life.

“About 20 minutes from Boise, it was built in his hangar where he designed the plane, and I was going there with my dad and working on the car. As he built it, it was pretty wild, pretty crazy,” recalls Davey Hamilton.

As Kevlar, honeycomb and carbon fiber grew in prominence in IndyCar as state-of-the-art construction materials, the DW2 chassis was made from the same kind of supplies that one found in any good short track machine. What emerged from the hangar was an unmistakably long and strange ship.

“It was a frame structure like a half-inch-and-three-quarter square tube, chromoly frame with an aluminum skin,” Ken Hamilton said. “At the time, they used a lot of honeycomb material in [Dan Gurney’s All American Racers] Eagles, Marchs, Penskes, and so on at that time. But [the DW2] was a complete nightmare. Unfortunately, being a poor boy and having no money, I had to go along with whatever they wanted to do to make this happen.

The insanely long DW2 could have been the inspiration for the two-seat Indy car. IMS picture

“That thing also had plywood in it.” Hamilton continued. “He used plywood in the rear vertical fins. He used woods that they would use in an airplane like balsa wood. I think he just put some kind of primer and painted over it.

“I had Rex Hutchison build me an engine in Sacramento; it was a Chevrolet 355,” he said. “At that time, Roger Rager was succeeding in [the Indy 500] with a Chevy in a school bus, and my engine was pretty good. Just my chassis was not.

What could be more remarkable – the guy in the tight shorts or the front of the DW2? IMS picture

The DW2 was a machine of extremes. Its 118-inch wheelbase was cartoonishly long among its contemporaries and the placement of the forward cockpit within its vast rectangular expanse was nothing short of shocking. Walker’s design choice meant that Hamilton’s feet and legs were precariously close to the leading edge of DW2’s nose where, oddly enough, his radiators were also located.

Positioned so far forward that its lower limbs would serve as impact structures, the DW2’s dashboard and steering wheel were nearly flush with the rear side of the front tires. It’s no exaggeration to say that if he had wanted to, Hamilton could have unbuckled his seat belts and leaned forward to touch the front wheels.

“Literally my feet were six inches from the wall if I had gone straight into the wall…” he noted.

It’s scary how well Hamilton has been placed in DW2. Photo of Amy Mauder

While the DW2’s chassis looked like the IndyCar version of a stretch limo, the aerodynamics attached to the chassis came from outer space. Although Ken Hamilton claims that Walker told him his body concepts were tested in a wind tunnel, Hamilton’s son doesn’t believe him.

“Here we’re from Idaho, we don’t know anything, but we’re excited to have the opportunity to come to Indy…no wind tunnel testing, no track testing,” he said. declared.

Ken Hamilton remembers the fateful call where he learned that the original Penske-inspired car would be scrapped in favor of Walker’s otherworldly ideas. Regrets were forming as the DW2 reached the end of its build.

“And I said, ‘Golly, you know more than I do. I have to take your word for it. But I’m telling you, when it’s all done and painted, yeah, OK, it’s definitely a different animal than what I’m used to looking at and seeing. But this is my only opportunity. I didn’t like that. But hey, if it works the way he thinks it’s going to work, that’ll be great.