Repair and conversion issues in 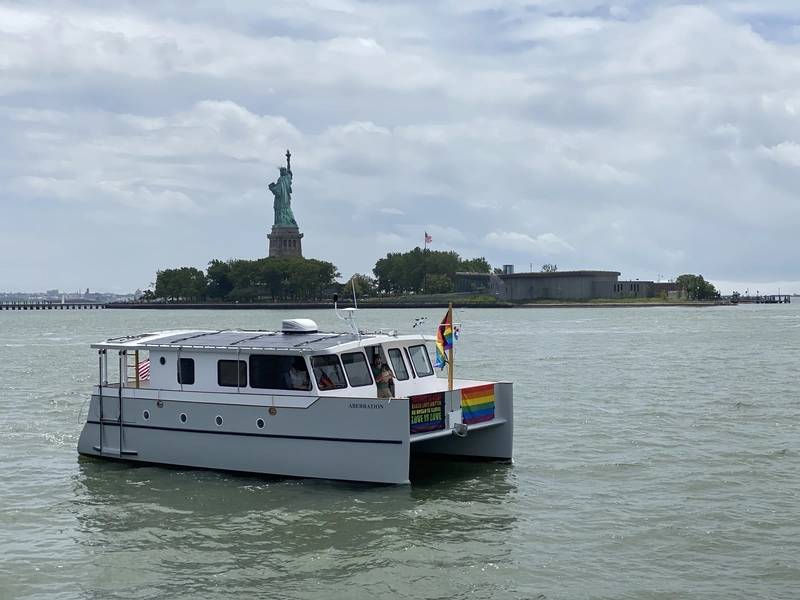 I recently built a 35ft wheelchair accessible solar hybrid electric catamaran for my wife who switched to a wheelchair a few years ago. (While typing this sentence, I just realized that this vessel can be called a SHEWAC)

This is only a 35ft pleasure boat, but it contains all of the propulsion parts found in any other modern hybrid powered vessel.
I used the ship for a summer and learned a lot that I hadn’t thought of when I first designed it.

Fortunately, most of the learning was positive, with lessons in all aspects of design, construction, operation and maintenance. Some of these lessons deal with the implications of repair and conversion and foreshadow issues that will become evident to the ship repair and conversion industry as it encounters more and more non-standard vessels.

In order to be able to make the comparison, a description of a “standard” vessel is necessary.

We have been living with standard ships for almost 50 years (ignoring the residual vapors that clung and the (re) emergence of diesel-electric propulsion).

The vast majority of ships over the past 50 years have been propelled by diesel engines via propeller reducers. In order for this to work, a wide variety of auxiliary systems including pumps, heaters, coolers, boilers, fuel treatment systems, and intake and exhaust systems were needed.
While there are many variations on the theme, this was a rare day when a detailed explanation was needed to familiarize a repairman (or conversion contractor) with an impending repair job.

Anyway, the whole industry was helped by the fact that due to the extreme technical stability of the concepts of ship propulsion, the number of suppliers had become remarkably small due to the consolidation. As such, in low speed diesels there were effectively three global suppliers; and although the number is a little higher for high-speed diesel engines and reducers, each job site had seen at least a few engines of each type, and in its area of ​​operation knew representatives or specialists of the manufacturers who could handle almost all propulsion components if they didn’t have in-house specialists. In addition, the pace of technological improvements was manageable (with the exception of recent engine additions to prevent the disappearance of internal combustion).

While the number of components on a non-standard (hybrid) vessel may not increase, the number of possible different components that may be present on a vessel increases dramatically. At the simplest levels, these can be solar panels, controllers, batteries, and chargers, but that’s just the tip of the iceberg.

The 35-foot wheelchair-accessible hybrid solar electric catamaran built by the author for his wife who switched to a wheelchair a few years ago. Photo courtesy of Rik van Hemmen

At the far end, these can be kite controllers, hydrogen tanks, fuel cells, and fission reactors. All of this could be manageable if we weren’t in the middle of a technological whirlwind that we may not have seen in our industry. This means that a range of batteries can only be installed for a few years and will be supplanted by the next generation of batteries and there will be many battery manufacturers before consolidation begins. And this will apply to all components of the propulsion system.

As such, every ship that enters a shipyard for the next several decades or so will likely have unique propulsion systems and components, each to be determined individually by a contractor who offers to make repairs or offer conversions. .
Because there will be such rapid technological advancement, repairs can become relatively rare due to a lack of repair knowledge or a lack of spare parts. This means that instead of fixing the propulsion system, conversions may be the order of the day.

It sounds really scary to ship owners who might see an increase in maintenance and repair costs due to the inability to make repairs once they have switched to the hybrid. (It should be noted that many hybrid systems inherently have considerably lower maintenance costs due to the reduced number of pumps, gaskets, heat exchangers, thru-hulls, and moving parts).

Strangely, this may not be as scary as it first appears, since the tech walk comes to the rescue. The cost of hybrid components can be expected to drop quite quickly and the efficiency of those components to improve as well, and then a conversion can actually be a lifecycle cost saving.

As such, a component failure can actually be an opportunity rather than a problem.

And component failures in well-designed hybrid systems are likely to be a much smaller fraction of the vessel’s overall value than propulsion components in standard vessels.

With the exception of shipboard fires, which are extremely expensive to repair, the biggest cost of shipboard damage is engine failure, and complete engine failure can be a significant fraction of the cost of l entire propulsion system.

One of the first accomplishments I had when designing and building the SHEWAC was that the ship’s most expensive single propulsion component was the back-up generator at 3.4% of the total cost of construction. Much lower than the cost of a propulsion engine. Complete replacement of the generator set would take about 6 man hours to remove and replace it and can be replaced with any generator set of similar size. (Note: This makes a strong case for high levels of standardization of interconnect functionality in hybrid systems.) If the vessel had been powered on diesel, the loss of a main engine would be a higher percentage, resulting in costs of higher labor costs for replacement, and even higher costs for modifications and replacement of additional components if an identical engine cannot be purchased.

While electrical components are not cheap, no component comes close to the cost of an engine and cannot be replaced with a similar (but not identical) component in the system.

Having said that, I thought about it when one of SHEWAC’s electric outboard motors failed. The device was still under warranty (these devices are very reliable and I think it was a case of infant mortality). Initially, the manufacturer provided instructions and sent various replacement components to the repair yard to see if that would solve the problem. It took a while and I asked the manufacturer if they could just provide a replacement outboard. Instead, we were instructed to ship the unit to a service center, which took longer to eventually get the unit serviced. I estimate that the cost of all this troubleshooting, communication, shipping and labor was close to the cost of a new outboard ($ 8,000) and a new outboard would have solved the problem more than one. months faster.

I waited longer for a gasoline outboard to be repaired so I have little to complain about the delay; but, knowing that technology is changing rapidly, I wonder how long I will actually be able to find a matching unit if there is another problem with this two unit boat. Therefore, having a spare part on hand wouldn’t be a bad idea and is just a ponderous item in this expanding universe of repair and conversion issues.