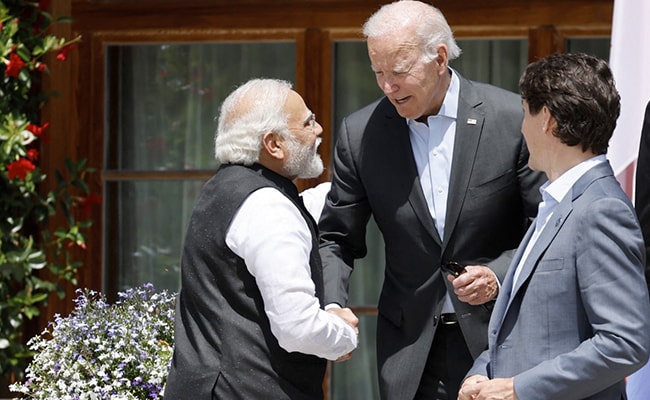 Prime Minister Narendra Modi, who was visiting Germany to attend the G7 summit, presented its leaders with various gifts illustrating the country’s wealth of arts and crafts, especially those related to the “One District” program , a product” of Uttar Pradesh.

Her gifts included a hand-knotted rug, a carved matka, itr bottles, a tea set, a brooch and cufflinks.

Prime Minister Modi presented a Marodi metal sculpture matka to German Chancellor Olaf Scholz. This nickel-plated and hand-engraved brass vessel is a masterpiece of Moradabad district, also known as Peetal Nagari or “brass town” of Uttar Pradesh. After casting the pot, the design to be engraved is first sketched on paper. An outline of the entire design is made with a fine engraving tool hammered with a block of wood. This particular type of engraving is called Marodi, due to the curved lines used to fill the negative space of this design.

He presented a Gulabi Meenakari brooch and cufflink to US President Joe Biden. Gulabi Meenakari is a GI-tagged art form from Varanasi. A pure silver coin is cast into a basic shape and the chosen design is etched into the metal. The raised shapes are then skillfully filled with crushed meena glass mixed with an intriguing natural glue of anardana (pomegranate seeds).

These cufflinks have been prepared for the President with a matching brooch for the First Lady. Gulabi Meenakari is an art form with GI tag. pic.twitter.com/bIzujEktLd

The paint is baked on layer by layer for permanence. The patterns mainly use the color pink (Gulabi), which gives the craft its name. These cufflinks were prepared for the President with a matching pin for First Lady Jill Biden.

The crockery is highlighted with platinum metallic paint in honor of the Queen’s Platinum Jubilee celebrated this year. Relief outlines are laid manually with Mehndi cone work pic.twitter.com/2s5Q1OZTIj

The base shape is hand painted and fired at 1200 degrees Celsius. The raised outlines are laid manually with Mehndi cone work and require an extremely confident hand. Each shape is then separately filled with color with great dexterity, and the whole cup is fired again.

To French President Emmanuel Macron, Prime Minister Modi offered “itr” bottles in a Zardozi box. The transport box was manufactured in Lucknow. The zari zardozi box has been hand-embroidered on khadi silk and satin fabric in the colors of the French national flag. The patterns are traditional Indo-Persian, hand-embroidered lotus flowers with blue metal thread and a pendant used in Kashmiri carpets and patterns from Awadhi architecture.

Hand-knitted silk rugs are renowned the world over for their softness. A Kashmiri silk rug is known for its beauty, perfection, luxuriance, luxury and fine craftsmanship pic.twitter.com/OImLYYG6p6

These exquisite creations are hand knotted on the warp threads, one at a time, according to a strict color code in the order of appearance in the pattern. The knotted product is cut with shears until it is smooth, and then treated with several brightening processes.

Characteristically, all silk rugs have a surprisingly innate attribute of displaying different colors when viewed from different angles or sides.

The pottery uses a special technique to bring out the black colors – while the pottery is inside the kiln, it is guaranteed that there is no room for oxygen to enter the kiln and the heat level remains high. pic.twitter.com/CWy1DrITWK

The Prime Minister presented black pottery to Japanese Prime Minister Fumio Kishida. Nizamabad black pottery uses a special technique to bring out the black colors – while the pottery is inside the kiln, it is guaranteed that there is no room for oxygen to enter the kiln and the heat level remains high. The presence of oxygen can turn pottery red. The glaze on the pottery comes from the high zinc content of the soil and the layer of mustard oil applied before the pottery is fired.

The Prime Minister presented a marble marquetry table top to Italian Prime Minister Mario Draghi. Pietra dura or marble inlay has its origins in Opus sectile – a form of Pietra Dura popularized in the ancient and medieval Roman world, where materials were cut and inlaid into walls and floors to create an image or pattern. This marble table top with inlay has its origin in Agra.

The delicate process involves manually cutting and engraving semi-precious stones on marble. To begin with, a predefined pattern, for example a floral pattern or a geometric pattern, is engraved on the marble object. Small pieces of different semi-precious stones are then delicately cut. These small pieces are then slid into grooves, turning this simple marble object into a beautiful and colorful masterpiece of art.

In addition to the G7 leaders of Canada, France, Germany, Italy, Japan, the United Kingdom, the United States and the European Union, the Prime Minister offered items to the leaders from Indonesia, South Africa, Senegal and Argentina.

The Prime Minister gifted Dokra Art with the Ramayana theme to South African President Cyril Ramaphosa. Dokra Art is a non-ferrous metal casting art using the lost wax casting technique. This type of metal casting has been used in India for over 4,000 years and is still in use today. There are two main lost wax casting processes: solid casting and hollow casting. The craftsmen’s products, which come mainly from central and eastern India, are in high demand in domestic and overseas markets due to their primitive simplicity, enchanting folk motifs and energetic form.

This particular artwork from Chhattisgarh is based on the Ramayana theme. The main characters of the work are Lord Ram riding an elephant along with Lakshman, Sita and Lord Hanuman.

This particular coin from Chhattisgarh is a figure of ‘Nandi – The Meditative Bull’. According to Hindu mythology, Nandi is considered to be the vehicle (mount) of Lord Shiva.

The Prime Minister presented Moonj baskets and cotton duries to Senegalese President Macky Sall. Moonj is a wonderful example of utilitarian craftsmanship made with sustainably sourced materials. Like Senegalese baskets, Moonj crafts also use bright, jewel-toned colors. This particular piece is by a master craftsman from Prayagraj. The strands of the sarpat grass used here are much finer, making them harder to weave.

The cotton durries are woven by hand in the Sitapur district of Uttar Pradesh.

Prime Minister Modi presented Ram Durbar hairspray to Indonesian President Joko Widodo. The lacquer art form labeled GI has its roots in the temple city of Varanasi. Wooden statues of gods, goddesses and sacred animals served as coveted souvenirs brought back by pilgrims. The process is tedious, requiring the assembly of a basic wooden form with separate limbs, which is coated with tempera or lacquer-based paint.

This particular piece is made on Goolar wood. In the artwork are Lord Ram, Sita, Lord Hanuman and Jatayu. The Indonesian version of the Ramayana is believed to have been written during the Medang Kingdom (732-1006 AD) in Central Java. He is known as Kakawin Ramayana.