Preserving the Past – Times-Standard 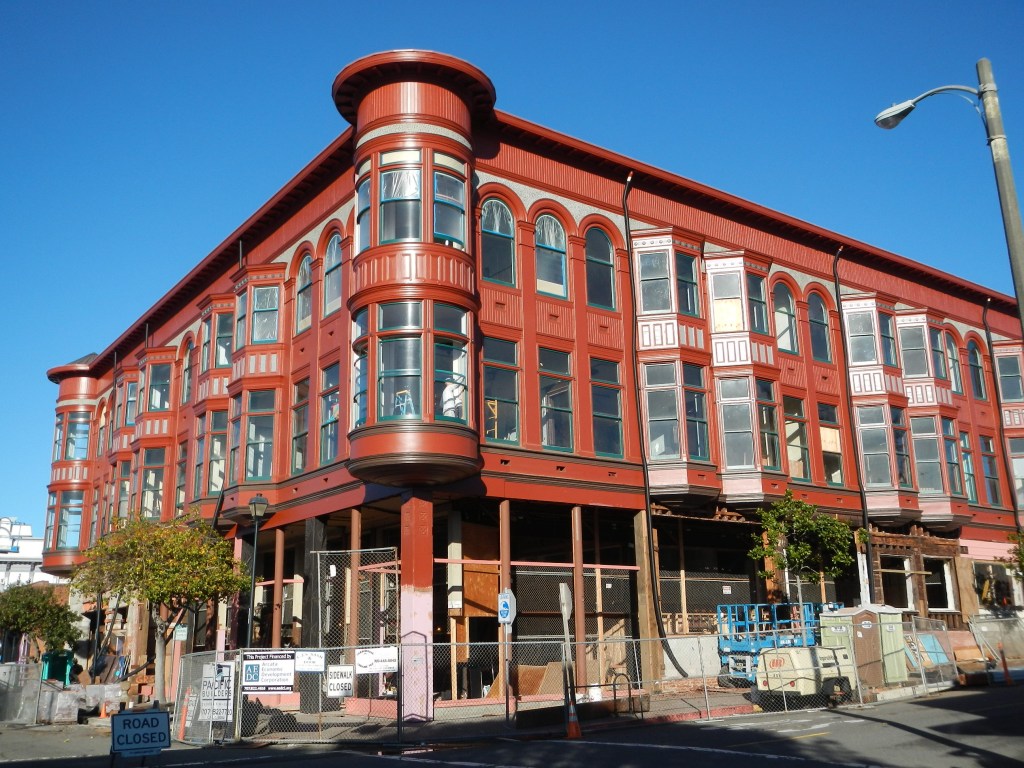 Historic curator Bill Hole of Eureka – who has long been an integral part of large restoration/renovation projects locally and elsewhere and has trained a new generation of curators – received the Askins Achievement Award from the Preservation Trades Network.

“Preservation is essential to honor our past, to capture the existing features of a historic building over time, and, through maintenance and modernization, to pass on to our future generations so they can touch and feel the ‘real object, read the stories added to the real object,’ Hole said.

The Preservation Trades Network (PTN) – https://ptn.org – is a non-profit organization founded to provide education, networking and awareness of traditional building trades. The award is named in honor of James Askins, founder of the National Park Service Historic Preservation Training Center and the first recipient of this award more than two decades ago.

“I feel very humbled and honored to receive this award from a jury made up of all past winners since inception in 1998, when Jim Askins received the first one,” said Hole.

Paying tribute to Hole, the PTN website states, “Bill Hole has created a long and highly esteemed career in preservation careers education, activism, advocacy and support for many PTN projects over the years. his seven years as a former board member. As a craftsman, he was committed to successful preservation education, which always combined the hands-on training of aspiring tradespeople with experienced, specialist professionals.

Hole – who actually learned he received the award in 2020 – was able to travel to a Preservation Trades Network conference in Ohio just recently to collect his award (a bronze plaque) after a two-year delay of the presentation of the award due to the pandemic.

Historic preservation, Hole said, is a direct study of cultural heritage and a chance to honor the people of the past “who gave us the buildings, structures and stories that remain.”

“It’s an area that involves recycling and reusing buildings, structures and objects that have already been created, giving us a chance to keep them alive,” he said.

Hole added: “As a craftsman, I have always enjoyed the challenges of dismantling, repairing and reusing what is still of value so that the resulting work is seamless between the old and the new. Preservation is about honoring our past, and for me that involves witnessing the tool marks of the original builders, honoring the ancient redwood and fir that are essentially unreplicable and unavailable for purchase today. today. …Mother Nature only provides a limited amount of resources and therefore reusing what we have in front of us is my first option, where buying new materials has usually been secondary.

Hole began his passion for historic preservation over 40 years ago, earning a degree in industrial arts and technology from Humboldt State University (now Cal Poly Humboldt) in 1979. After taking a hiatus and made a four-month ocean sailing trip to Haiti, Hole moved to San Francisco Bay to work as a boat builder for a few years.

“Our workshop has focused largely on repairing and upgrading sailboats and cruisers. It was there that I first realized the importance of the terms repair, replace and honor the ‘original fabric’ when it came to my craft as a carpenter,” said Hole, who also undertook repair work to historic structures in Berkeley on the side.

“I became so enthusiastic about historic buildings that I learned from the original builders their building techniques and witnessed the tool marks of a time when buildings were physically constructed by hand, with tools by hand, using both hand and machine milled lumber,” he said.

In the mid-1980s, Hole obtained his general contractor’s license. In time, he began teaching residential carpentry at the College of the Redwoods in Eureka. In 1995, Hole was commissioned to create CR’s Historic Preservation and Restoration Technology Program.

Initially, Hole was reluctant to do so.

“My initial review was hesitant due to the high professional skill requirements needed to ‘restore’ authentic historic buildings from a training program that allowed open entry to students with the highest level of skill. J eventually created a series of six-course Certificate of Completion as a one-year option, and in 2002 added another 10 courses to create the first Associate of Science program west of Mississippi and all 110 community colleges in California,” he said.

Hole added, “The college had a great working lab that we used as a hub, and the community became our classroom as I took HPRT out into the field to teach people by doing – practicing our training on living buildings, investigating historical documents in the archives places around us and developing a “field school” approach to repairing buildings, unlike “building a new house” which provided students in the program with carpentry the practical experience of learning a trade.

“Having no specific budget or project house, I scoured the community and found buildings for students to practice and apply their skills on this college-approved one; two, self-funded projects that could provide equipment and supplies; and three, a historically accurate building that needs our help,” Hole said.

“In addition, students were required to write historical research papers and document buildings of their choice over the years, resulting in hundreds of other buildings touched by the hands and hearts of students, as well as many excellent reports that have documented these buildings over time.” he said.

Hole says that while the College of the Redwoods closed its Historic Preservation and Restoration Technology program in 2014, he’s glad to see its impact on the preservation professions is still strong.

“Humboldt County is one reason I have been able to thrive in preservation, and so many people have attended HPRT courses over the years, and the plethora of buildings and policies saved and adopted thanks to community support,” he said.

“I think one of the best things about teaching in a dynamic and unique program as historic preservation and restoration technology at CR,” said Hole, “is that many of my students have gone through training and continuing education the same way I did before diving into full time trades as a career I have always been passionate about training the trades people of tomorrow, and now when I reconnect with d ‘former students who are living their dream and working their skills to earn a living, I become enthusiastic for them. I can agree that the life of the trades is neither easy nor cheap, but it is certainly a life-long profession. life, which requires a lot of intelligence, which allows you to earn an honest living and which always represents a different challenge from one project to another.

At the same time that the Historic Preservation and Restoration Technology program at CR was closing, Hole said he was invited by a historic Los Angeles architectural firm to work for them as a local resource, project manager. and field trainer for the restoration of the Carson Block Building. / Northern California Indian Development Council rehabilitation project, which Pacific Builders completed.

In 2018, when he retired from teaching, Hole said he was asked to write and document numerous local, state and federal historical appointments and historical tax credit documents. Chapman House in Arcata.

“Another “first” for me on another of Humboldt’s coolest historic buildings. Again, I was able to share my expertise and best support local preservation,” said Hole, who was also an integral part of renovating the Motor Vessel Madaket, a historic California vessel built in 1910 that offers various cruises around of Humboldt Bay. today.

Now retired from teaching in the preservation and building trades, Hole says he finally has the time and focus to restore and rehabilitate his own historic home and property, which he bought there. almost 20 years ago.

“I (also) have more time to tend my heritage garden, socialize with my friends and practice my crafts than time just wouldn’t allow,” he said. “It is true that I will never stray from my passion to repair (in place), remove (then repair and replace) and restore its authentic state while meeting the modern uses we demand of a building in the life of a building. ‘today.”

Reflecting on it, Hole says his successes in teaching preservation trades could not have happened “without the hundreds of adults who have changed their lives to enroll and take the courses I created for make learning serious, meaningful and hopefully fun. Or without a university that has supported my journey and enabled the most creative preservation training program in California.

“Our community is certainly touched in so many places by the hands of so many students who have completed all of these assignments, research papers and field school projects in order to earn a grade and achieve their learning goals. “Hole said.