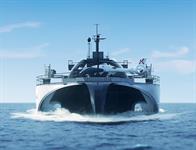 It also wants to build a factory in Japan to produce grid and marine batteries to enable delivery of the energy transfer vessel, as well as fast-charging batteries for electric vehicles (EVs).

PowerX believes the first vessel in the series – capable of delivering 222 MWh – will cost 3 billion yen ($27 million) per vessel. It plans to raise capital through private funding, including partnerships with major Japanese shipyards.

The electricity generated by the wind farm would be transported via grid cables to an HVDC platform collector and converter, which would then feed a PowerX mini-grid and then the batteries on board the vessel.

PowerX estimates that it will take about four hours to fully charge the batteries of an offshore wind farm.

He says his ship will be more resilient to natural disasters than the undersea power cables traditionally used to transmit energy from offshore wind farms.

PowerX also argued that such a vessel would be cheaper and faster to develop, and would have far less impact on the environment than undersea cables.

The company plans to target markets around the world.

It aims to complete the first model in its Power Ark series, the Power Ark 100, in 2025. The vessel will carry 100 grid batteries capable of delivering a combined 222 MWh, equivalent to the total electricity consumption of 22,000 homes. Japanese in one day, he claimed. .

The vessel will be 100.5 meters long and 21.9 meters wide, with a draft (the distance between its keel and the waterline) of 5 meters. It will be able to carry a load of 2,200 tonnes and reach a top speed of just under 26 km/h.

The company believes its Power Ark ships will enable the transport of energy between two ports.