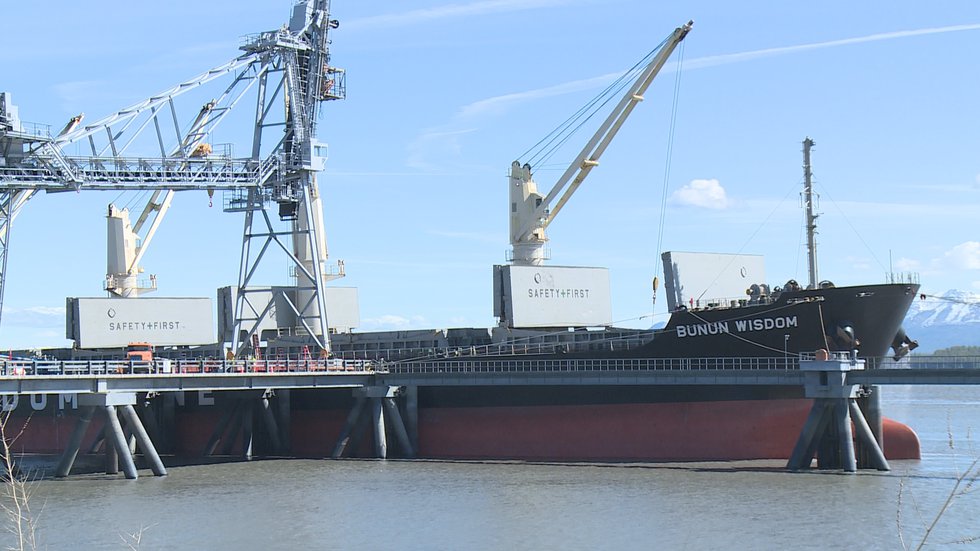 The ship arrived and docked Friday evening on the Knik Arm carrying 30,000 tons of concrete which will be used for various projects in the state. Port operations manager Therese Dolan said the ship should be fully unloaded by Thursday.

“We’re looking at a six-day discharge, right now they’re ahead of schedule,” Dolan said. “It was a very smooth operation, everything went like clockwork.”

The ship’s cranes operate continuously to lift loads of 12 “superbags” of materials off the ship and onto the platforms of semi-trailers, which then take them to an area on port property for storage. The crews will work around the clock until the cargo is fully unloaded.

This is the first ship to dock at Port MacKenzie this year. Matanuska-Susitna Borough Superintendent Mike Brown said the port typically operates in deficit when he discussed the port’s future at the May 3 assembly meeting.

At the meeting, Brown proposed that the borough enter into a public-private partnership with a company that could use the port and take over its operations and conduct business development while the borough retained ownership.

“It might not stimulate much revenue for the borough initially, but it would generate economic activity that should lead to growth and jobs,” Brown said.

The borough received a $6.7 million grant from the United States Economic Development Administration to repair and improve port infrastructure to preserve deep-draught wharf piles to extend the life life of the port and to develop a haulage ramp capacity. Currently, the borough is also trying to get rid of the conveyor system that was used for a wood chipping operation and which is no longer in operation.

Borough officials have also been in talks with the Municipality of Anchorage to enter into some sort of partnership. The municipality has not expressed interest in creating a regional port authority, but instead has proposed an Upper Cook Inlet Marine Energy Alliance, which would leverage public and private investment to develop a micro -grid in the port district of Mat-Su borough that could potentially provide cost-effective renewable energy. power to both ports.

Whether or not the municipality and borough enter into the proposed partnership, officials continue to explore ways to stimulate economic opportunity in Port MacKenzie once Bunun Wisdom ships.