Police and US agents search oligarch’s yacht in Spain 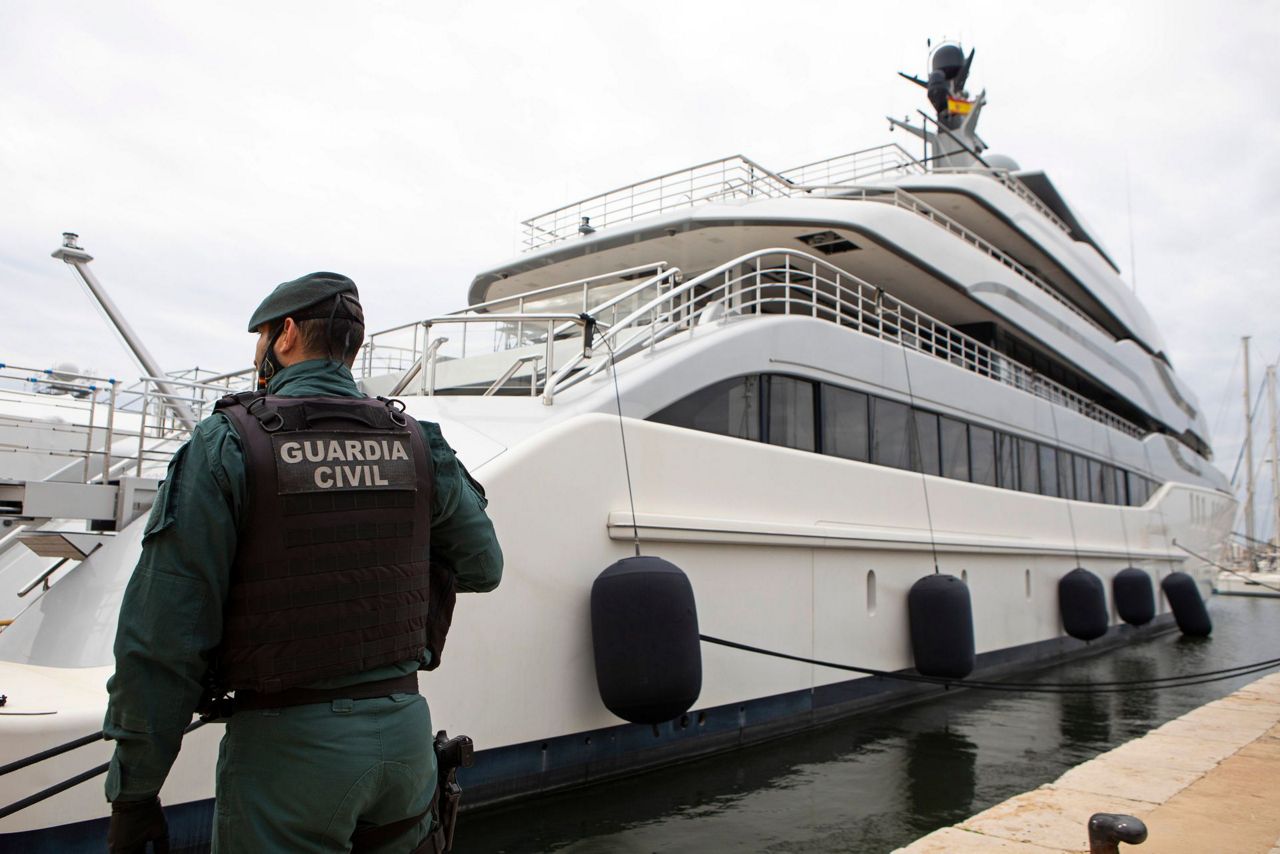 PALMA DE MALLORCA, Spain (AP) — The U.S. government on Monday seized a 254-foot yacht in Spain belonging to an oligarch with close ties to Russian President Vladimir Putin, a first for the Biden administration under sanctions imposed after the Kremlin invaded Ukraine and target the expensive assets of Russian elites.

Spanish Civil Guard and US federal agents descended on the Tango at the Marina Real in the port of Palma de Mallorca, the capital of Spain’s Balearic Islands in the Mediterranean Sea. Associated Press reporters at the scene saw police entering and exiting the boat.

The US Department of Justice, which obtained a warrant from a federal judge in Washington, alleges the yacht should be confiscated for violating US bank fraud, money laundering and sanctions laws.

Superyachtfan.com, a specialist website that tracks the largest and most exclusive pleasure boats in the world, values ​​the 78-meter vessel, which bears the flag of the Cook Islands, at $120 million.

The yacht is among assets linked to Viktor Vekselberg, a billionaire and close Putin ally who heads the Moscow-based Renova Group, a conglomerate encompassing metals, mining, technology and other assets, according to Department of Justice documents. US Treasury.

All of Vekselberg’s assets in the United States are frozen and US companies are prohibited from doing business with him and his entities. The Ukrainian-born businessman built his fortune by investing in the aluminum and oil industries in the post-Soviet era.

Prosecutors allege Vekselberg bought the Tango in 2011 and has owned it ever since, although they believe he used shell companies to try to conceal his ownership and avoid financial scrutiny.

They argue that Vekselberg and those who work for him continued to make payments using US banks to support and maintain the yacht, even after sanctions were imposed on him in 2018. Those payments included a December 2020 stay in a luxury water villa resort in the Maldives and yacht mooring fees.

It is the first US seizure of an oligarch’s yacht since US Attorney General Merrick Garland and US Treasury Secretary Janet Yellen convened a task force known as REPO – short for Russian Elites, Proxies and Oligars – in order to apply sanctions after Russia invaded Ukraine in late February.

“It won’t be the last.” Garland said in a statement, “Together with our international partners, we will do everything we can to hold accountable any individual whose criminal acts allow the Russian government to continue its unjust war.”

Vekselberg has long had ties to the United States, including a green card he once held and homes in New York and Connecticut. He was also interviewed as part of Special Counsel Robert Mueller’s investigation into Russian interference in the 2016 US presidential election and worked closely with his US cousin, Andrew Intrater, who runs the company. New York-based investment management firm Columbus Nova.

Vekselberg and Intrater have been given the spotlight in this investigation after adult film star Stormy Daniels’ attorney released a memo claiming $500,000 in silent money was funneled through Columbus Nova to a front company created by Donald Trump’s personal lawyer, Michael Cohen. Columbus Nova denied that Vekselberg played a role in his payments to Cohen.

Vekselberg and Intrater met Cohen at Trump Tower, one of several meetings between members of Trump’s inner circle and high-profile Russians during Trump’s 2016 campaign and presidency transition.

Vekselberg, 64, founded Renova Group more than three decades ago. The group has the largest stake in United Co. Rusal, Russia’s largest aluminum producer, among other investments.

The yacht sails under the Cook Islands flag and is owned by a company registered in the British Virgin Islands administered by different companies in Panama, the Civil Guard said, “following a complicated financial and societal network to conceal its true ownership. “.

Officers confiscated documents and computers inside the yacht which will be analyzed to confirm the true identity of the owner, he said.

The US Department of Justice has also launched a sanctions enforcement task force known as KleptoCapture, which also aims to enforce financial restrictions in the United States imposed on Russia and its billionaires, in collaboration with the FBI, US Treasury and other federal agencies. This task force will also target financial institutions and entities that have helped oligarchs move money to dodge sanctions.

The White House said many allied nations, including Germany, the UK, France, Italy and others, are trying to collect and share information against sanctioned Russians. In his State of the Union address on March 1, President Joe Biden warned the oligarchs that American and European allies would “find and seize your yachts, your luxury apartments, your private jets.”

“We come for your ill-begotten gains,” he said.

Monday’s capture is not the first time Spanish authorities have been implicated in the seizure of a Russian oligarch’s superyacht. Officials said they seized a ship worth more than $140 million belonging to the CEO of a state-owned defense conglomerate and a close ally of Putin.

French authorities have seized superyachts, including one believed to belong to Igor Sechin, a Putin ally who heads Russian oil giant Rosneft, which has been on the US sanctions list since Russia annexed Crimea in 2014.

Italian financial police quickly seized the Lena superyacht belonging to Gennady Timchenko, an oligarch close to Putin, in the port of San Remo; the 65-meter (215-foot) Lady M owned by Alexei Mordashov in nearby Imperia, with six suites and an estimated value of 65 million euros; as well as villas in Tuscany and Como, according to government officials.

Copyright 2022 The Associated Press. All rights reserved. This material may not be published, broadcast, rewritten or redistributed without permission.