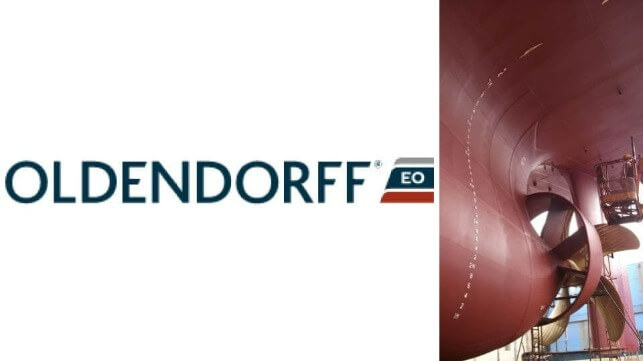 In the early 1980’s, OLDENDORFF CARRIERS was the first dry bulk shipping company to invest in wake equalization (WED) ducts, when we installed ‘Schneekluth’ fuel saving ducts on our new buildings Panamax of 74,000 tdw “Ludolf Oldendorff” and “Helga Oldendorff”.

Many other fixtures have been added over the years, and last week we ordered Becker “Mewis” ducts and rudder bulbs for another 12 ships (7 Babycapes and 5 Post-Panamax), which will be installed over the course of in the first half of 2023. In our existing fleet, we will therefore have WEDs installed on the following 45 bulk carriers:

This means that by next year, 45 of our vessels will be fitted with a wake equalizer duct, which will help achieve better CII ratings, lower fuel consumption and emissions. Additionally, at least 20 of our vessels are fitted with asymmetric fins, rudder bulbs, wing-blade propellers and other fuel-saving devices.

Additionally, since 2019, we have invested over US$300 million in the Exhaust Gas Cleaning System (EGCS), which reduces nearly all sulfur oxide emissions. Compared to ships that burn VLSFO without such systems, our ships emit up to 90% fewer particulates and up to 60% less black carbon than ships burning VLSFO, leading to greenhouse gases. much cleaner exhaust at sea and in port.


The products and services described in this press release are not endorsed by The Maritime Executive.