Palenque: The discovery of a head of the Mayan god of corn, hidden in Chiapas for more than 1,300 years | Culture 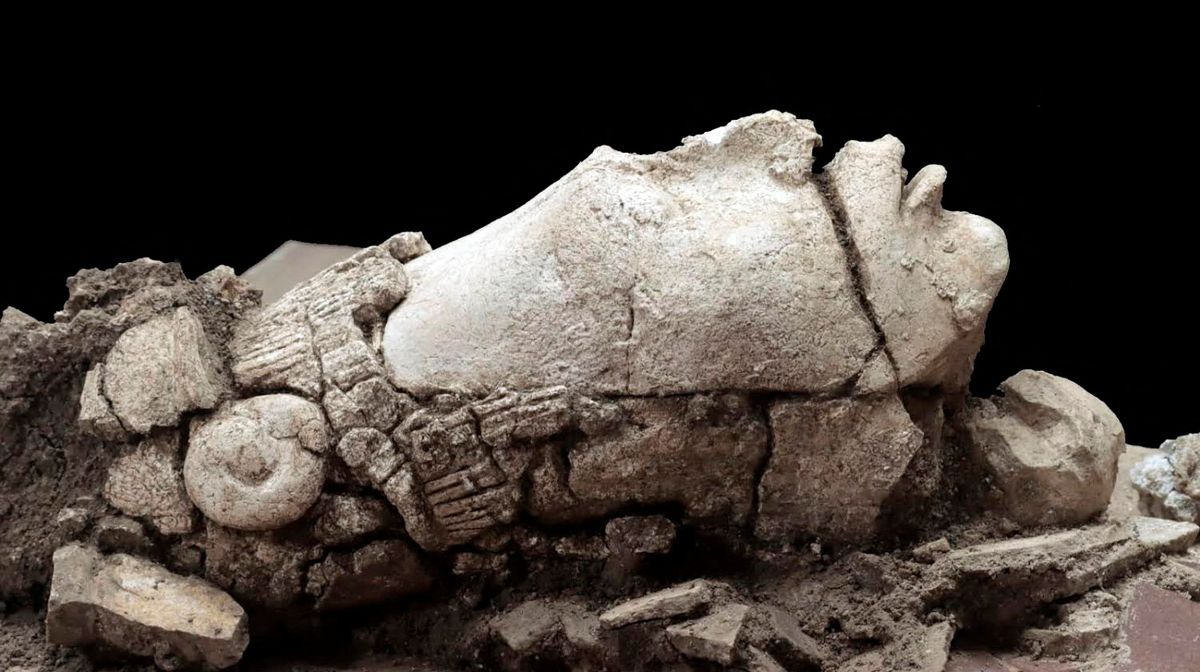 For the ancient Mayas, corn was the vital plant par excellence. The Popol Vuh, their sacred text, tells that the gods created humans from its dough, after first trying to make them from mud and wood. Only those made from corn dough have survived; they alone had the power to worship the gods, to thank them for their creation and to serve them. The human figure, according to the story, was molded from white corn, and its blood came from red corn. Alberto Ruz Lhuillier, known for having discovered the tomb of the sovereign Pakal the Great in the Temple of the Inscriptions of Palenque, explains in his book The Mayas that people represented the maize god as “a young man, whose elongated head resembles the shape of a cob and is surrounded by leaves”. Just a few months ago, specialists from the National Institute of Anthropology and History (INAH) found such a representation of the young Mayan god of corn during conservation work in a corridor of El Palacio in Palenque , in the state of Chiapas, southern Mexico. The artifact is over 1,300 years old and is the first stucco head discovered at the archaeological site. The sculpture is part of an elaborate offering in a pond. It was an amazing image to the trained eyes of archaeologists. “The discovery of the deposit allows us to begin to understand how the ancient Mayans of Palenque constantly relived the mythical passage on the birth, death and resurrection of the deity of corn”, explains Arnoldo Gonzalez Cruz, researcher at the INAH Chiapas Center.

The head of the corn god is 45 centimeters long, 16 centimeters wide and 22 centimeters high, in the shape of a young man with a pronounced cranial deformation. He resembles an ear of corn, and his long hair mimics the shape of corn silk. “The sculpture, which was to be modeled around a limestone support, presents graceful features: the chin is pointed, pronounced and cleft; the lips are thin and projected outwards; the lower lip slopes slightly downward and the upper incisors are visible. The cheekbones are thin and rounded, and the eyes are elongated and thin. A large, pronounced nose protrudes from the long, wide, flattened rectangular forehead,” describe archaeologists Carlos Varela Scherrer and Wenceslao Urbina Cruz, who oversaw the excavations as field supervisors. Due to the ceramic type of the tripod plate that accompanied the head of the “tonsured young maize god” – a description that alludes to the deity’s cropped hair, reminiscent of ripe maize – the archaeological piece has been dated to the period Late Classic (700-850 AD).

The sculpture was discovered inside a semi-square receptacle formed by three walls one meter wide by three meters long. His nose and his half-open mouth emerged from a layer of loose earth. When discovered, the head rested inside the pond on an east-west orientation, symbolizing the birth of the corn plant with the first rays of the sun. According to researchers, for the Maya, the pond functioned as a water mirror that reflected the sky back to them. As archaeological exploration continued, it became clear that the sculpture was the center of a rich offering placed on a pond, imitating this god’s entry into the underworld. In Maya mythology, as the personification of the sown grain, the god performs various rites in the underworld. According to the myth,[the Mayan god] travels in a canoe driven by the rowing gods, is dressed by naked young women, and finally sprouts from the shell of a turtle, symbol of the earth. In this last act, he appears flanked by two gods, Hun Ajaw and Yax B’alam, who would be the version of the twin heroes, Hunajpu and Xb’alanke, of the Popol Vuh, son of Hun Junajpu”, explains archaeologist Tomás Pérez Suárez, from the Center for Mayan Studies of the Philological Research Institute of the National Autonomous University of Mexico.

Night rituals at the pond probably began during the governance of K’inich Janaab’ Pakal I (615-683 AD) and continued during those of K’an Bahlam II (684-702 AD), K’an Joy Chitam II (702-711 AD) and Ahkal Mo’Nahb’ III (721-736 AD). Eventually, perhaps during the reign of Ahkal Mo’Nahb’III, the inhabitants of Palenque symbolically closed off the space, breaking part of the pond’s stucco floor and depositing a series of items there: vegetables, bones quails, turtles, fish and domestic dogs, shells, carved bone fragments, ceramic pieces, pieces of miniature anthropomorphic figurines, 120 obsidian blades, green stone beads and shell beads , as well as seeds and small snails.

“The placement of these elements was concentric, covering almost 75% of the cavity, which was sealed with loose stones. Some animal bones have been cooked, and others have flesh marks and teeth impressions, so they were surely used for human consumption as part of the ritual,” says specialist Arnoldo González Cruz. A perforated limestone slab – 85 centimeters long by 60 centimeters wide and 4 centimeters thick – was placed on top of the offering, after the tripod plate had been broken almost in half and one of its pieces were placed in the hole in the slab. Above the slab lay a semicircular bed of potsherds and small stones, on which was placed the head of the deity, supported by the same materials. The whole space was sealed with earth and three small walls, leaving the head of the young corn god inside a kind of box, where it remained hidden for 1,300 years.

“The room is quite fragmented. It was found in a context of humidity, so it had to be left to dry gradually, so that the piece would not deteriorate with such a drastic change of environment, since it was flooded with water. Now it is already in a much drier state, which makes it possible to begin its restoration. What we are going to do is clean and then try to adhere all the fragments and save all the other ceramic fragments found with the piece,” explains restorer Jorge Alejandro Coraza, referring to the fragments of the plate on which the sculpture appeared, since it “was originally conceived as a severed head”. Such depictions of the young maize god appear in other exhibits and documents, such as a series of plates from the Late Classic period (600-850 AD), a vessel from the Tikal region, from the Early Classic period (150 -600 AD), and depictions in the Dresden and Madrid codices, in which the deity, or figures related to him, appear with their heads severed.

“It’s the story of a time when everything is still silent and placid. All is quiet and calm. Silent and empty is the belly of heaven,” begins the Popol Vuh. First, he continues, the gods created humans from clay. It did not work. They collapsed when it rained, and they were unable to speak and reproduce. So the gods tried to use wood, but men had neither soul nor memory; they could not remember who their creators were. Finally, they tried corn. This version that finally worked. From this corn people was born the first human society able to understand with precision the lunar, solar and Venusian cycles, to write and invent the zero. Gradually they expanded and populated southern Mexico, Guatemala and Honduras. Maya cosmology included the sky, the earth, and the underworld, each of which extended in four directions, representing four ceibas, four birds, four types of corn, and four colors.