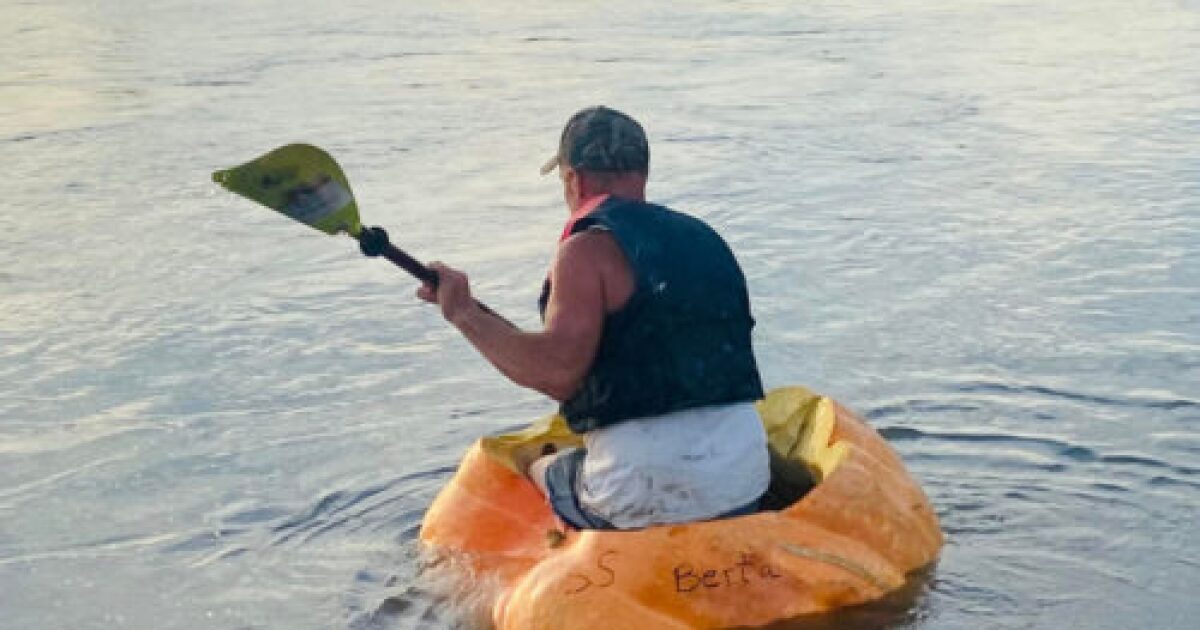 But Duane Hansen and his beautiful water bottle, which he named Berta, proved them wrong. Like Cinderella’s fairy godmother, this man from Nebraska has proven that you really can turn a pumpkin into a functional vehicle – in this case, a seaworthy ship.

Yes, you read that right. Hansen wanted to celebrate his 60th birthday by digging out his prized 846-pound gourd and cruising the Missouri River inside. (We guess for some, when you reach a pivotal age, a plate of cake and ice cream just isn’t enough.)

Not only did Hansen enjoy a pumpkin cruise on his special day, but his 38-mile trip also earned him a world record! In case you were wondering, the previous world record for the longest sail in a pumpkin patch was 25 miles, set by a man from North Dakota in 2018. What’s this for a gift? birthday for yourself?

It was not an easy trip. Getting your hands on a water bottle big enough to serve as a boat is already a challenge. Then there was the waterway he chose: The city of Bellevue, Nebraska, posted a photo of Hansen on the water that serves as a reminder of just how big the Missouri River is:

Check out a News Channel Nebraska report on his unique feat below:

About his pumpkin stint, Hansen’s daughter, Morgan Buchholz, had this to say about his pop:

“He always said you can do whatever you want and how can you not believe anyone who goes out and does exactly what they want and I’m so proud,” Buchholz told News Channel Nebraska in tears.

Hansen reportedly spent nearly a decade trying to grow a gourd large enough to function as a sailboat. He was inspired to begin his mission after meeting a woman who previously held the record at a pumpkin growers seminar. He told News Channel Nebraska that he asked him many questions about his experience, including whether you could drink beer while riding a pumpkin.

As for his future in gourd, well, Hansen says there is none.

“I won’t do it again,” he said after his record-breaking trip. “I’m done with that.”

He told KMTV that the trip hurt his knees. The wake of the boats was rough, and when they passed he said he had to stop everything and hang on.

“If someone breaks this record, I will bow to them because they are tough,” he said.

Maybe he can focus on growing the biggest pumpkin in the world next time!

This story originally appeared on Simplemost. Check out Simplemost for additional stories.