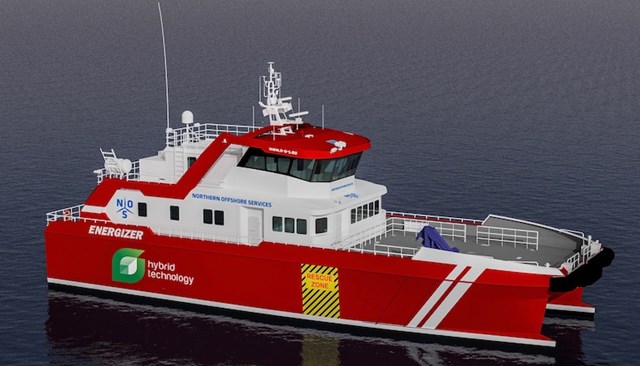 Swedish company NOS worked with MHO-Co to develop the vessels.

The CTVs will take around four hours to get to the site from their base at the port of Grimsby on the UK’s east coast.

This transfer system will be installed as an additional feature allowing technicians to access Hornsea 2 transition parts directly from the CTV.

Jan Stilling, Orsted Marine Specialist, said: “The new CTVs have incorporated a large battery capacity that allows them to stay off overnight in hybrid mode, which means they don’t burn fuel up. ‘at eight o’clock while the ships hold their position without anchoring or mooring. to a buoy.

“The new gateways will function as additional support for the additional access required during construction at the site.”

NOS will take delivery of its 39-meter “Energizer” in spring 2021 and MHO-Co is expected to deliver two 35-meter CTVs in the summer.

The batteries installed on the three vessels can be recharged either by the excess power, the on-board generator or via a recharging buoy system which will be tested during the construction of the wind farm.

Both designs were created with a view to implementing fuel cell technology once the proper storage for fuel types such as hydrogen or methanol was developed for on-board use.

NOS Group CEO David Kristensson said: “I am grateful that NOS has won the contract to provide our CTV services to Orsted during construction of Hornsea Two.

“Energizer, the first CTV in our E-Class series, represents years of research and development and will provide the best possible performance in the toughest sea conditions.

“In addition, I am very excited about our new hybrid solutions which will reduce both fuel consumption and emissions at sea.

“The Hornsea 2 project represents the perfect start for our new series of ships. ”

Diesel-electric drivetrains can also be powered from the large searchable onboard battery pack during nighttime and slow cruising.