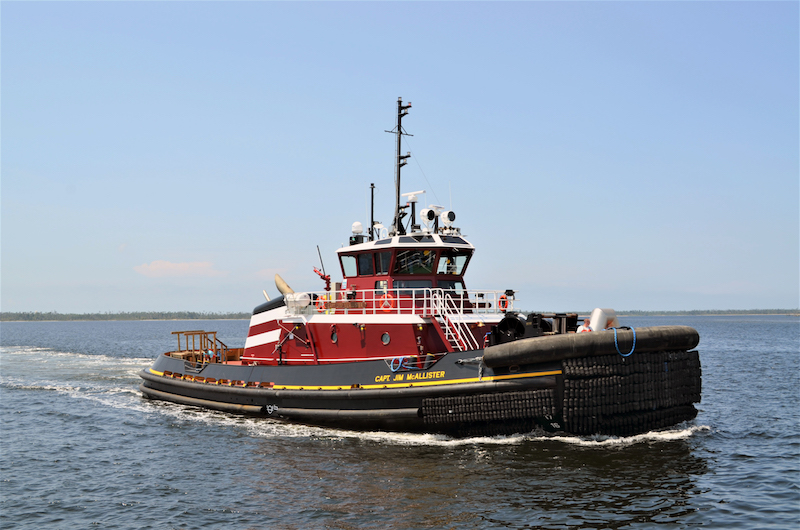 The Captain Jim is the fourth in a series of four 100ft x 40ft, 80 MT tugs. The tug is the 33rd tractor tug in New York-based McAllister’s fleet. Jensen Maritime Consultants, Seattle, designed the tugboat to the max abs Maltese Cross class standards.

The level 4 motorized tug is designed to handle the new generation of neo-Panamax container ships now calling regularly at several ports on the east coast. On the arch Captain Jim has a Markey DEPCF-52 75 hp fFull return / recovery class II escort winch with an 800 ’10 “line. Aft the tug has a Markey DEPC-42 hawser winch with 450 ‘of 2 1/4 “Amstel Blue line.

Rated for 80 metric tonnes of bollard pull, the new tug outperformed in sea trials and reached 82.5 tonnes during its US Bureau of Navigation bollard pull certification and had a maximum pull of 83.70 tonnes. The tug has a maximum draft of 18 ‘. Capacities include 58,710 gallons. of fuel oil, 545 gallons. lubricating oil and 3,075 gallons. drinking water.

The Captain Jim joined its sister ships, the Captain Brian McAllister, Rosemary McAllister and Ava McAllister, as the most powerful Tier 4 tugs in the McAllister fleet. The combination of its eco-friendly Cat engines with the Markey winches on the bow and stern puts the Captain Jim at the forefront of docking tugs on the U.S. east coast, McAllister said in a statement.

The Rosemary McAllister was named one of the significant boats of 2018 by Work boat magazine at the 2018 International Work Boat Show in New Orleans. The lead ship in this series of four ships, the Captain Brian, was delivered in 2017 by Horizon Shipbuilding Inc.

McAllister is eager to put the new tug into service.

“We are delighted and proud to be able to provide the latest level of service to our Charleston customers,” said Captain Steven Kicklighter, vice president and general manager of Charleston McAllister Towing Inc. “The Captain Jim will make a huge difference here. We receive 1,200 ‘/ 14,000 TEU container ships almost daily. This tugboat, with its capabilities, will be able to safely handle these vessels and even the larger ones with exceptional control and power.

The Captain Jim named after James P. McAllister, the legendary second-generation McAllister who joined the company in 1885.