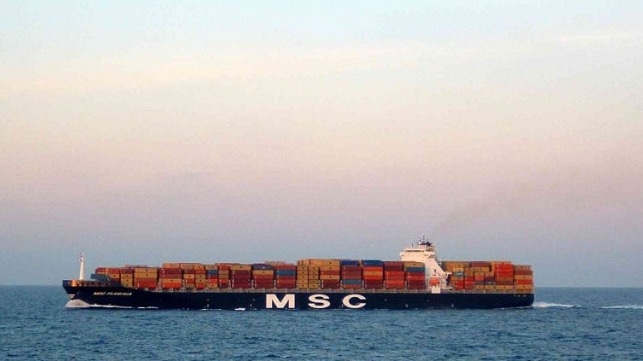 Thirteen months after a Pennsylvania furniture company filed a complaint with the Federal Maritime Commission over MSC and COSCO’s denial of service, the chief administrative judge handling the case for the FMC has lost patience with MSC . Last week she filed a motion which the FMC has now released showing that MSC has two weeks to justify why the judge should not issue a default decision and award financial compensation to the furniture company.

The problem is what Judge Erin Wirth considers a delaying tactic and the lack of response from the MSC. After the case was filed in late July 2021, it went through a series of phases leading to discovery. The judge issued an order on December 8, 2021, requiring MSC to produce documents on file for the discovery process. It was followed by orders, the last on July 29, giving MSC until August 29 to produce the entire exceptional discovery.

MSC reports that it has sought advice and assistance from the Federal Office of Justice in Switzerland and cites this as the reason for its requests for an extension in the FMC case. In her motion, however, Judge Wirth indicates that the Court of First Instance in Geneva (Switzerland) rejected MSC’s claim, while MSC maintains that the court’s decision was wrong. They cite a later document from the Federal Office of Justice in Switzerland claiming it sides with MSC while the judge in the FMC case said the Swiss were only giving instructions to MSC on how to file a new file without any discussion on the merits of MSC’s request.

“In several filings, MSC Mediterranean Shipping has indicated that it will not produce the find it has been repeatedly ordered to produce,” Judge Wirth wrote. Expressing her frustration, the judge cites FMC rules that give her the power to “make a default decision against the disobedient party.”

The case centers on shippers’ now-familiar claims that carriers failed to provide service under their freight contract, resulting in significantly higher costs for the shipper in the spot market. . The furniture company, MCS Industries, was the first to file such claims since the start of the surge in shipping volumes during the pandemic. They also initially alleged collusion between MSC and COSCO, citing both carriers in their complaint. MCS initially said it was seeking $600,000 in its lawsuit, which suspected market manipulation and collusion among the major carriers.

COSCO settled the claims with MCS just over a month after the complaint was filed. The terms of the settlement remain confidential and despite the FMC’s public stance of encouraging settlements, MSC has moved the case forward. He issued a denial claiming the issues were all miscommunications and said MCS later withdrew the collusion allegations. MCS continued to seek damages from MSC, however, although no amount was specified in subsequent filings.

Judge Wirth is giving the carrier just two weeks to respond to her order and explain why she shouldn’t make a judgment because of her refusal to produce the information to be uncovered in the case. At the same time, the judge writes that the shipper, MCS Industries “should identify the dollar amount of repairs it seeks.”

The judge offers the possibility to MSC to provide the documents of discovery or to settle before rendering its decisions. Final responses to follow-up queries are expected from MSC by October 6 and from the complainant, MCS by October 14. Barring progress on the current discovery impasse, the judge is expected to issue her final decision shortly after these answers.

In the year since MCS filed its complaint, other shippers have followed with similar charges against a range of carriers. Maersk recently received a $180 million complaint filed with the FMC, while carriers including CMA CGM, Evergreen, HMM and Yang Ming have each been named in other complaints.

Reforms to the Ocean Shipping Act enacted in June 2022 include new provisions allowing shippers to file complaints for “unreasonable refusal to deal or negotiate with respect to the accommodation of vessel space”. Today, the FMC released its proposed rule and sought public comment on this key provision of the reforms. A new rule is expected to be released this year that would make it easier to file complaints against carriers and shift the burden of proof in responding to complaints from the shipper to the carrier. Anticipating that this could open the doors to more filings, the CMF has already implemented a new structure for its Office of Enforcement, Investigations and Compliance structure.