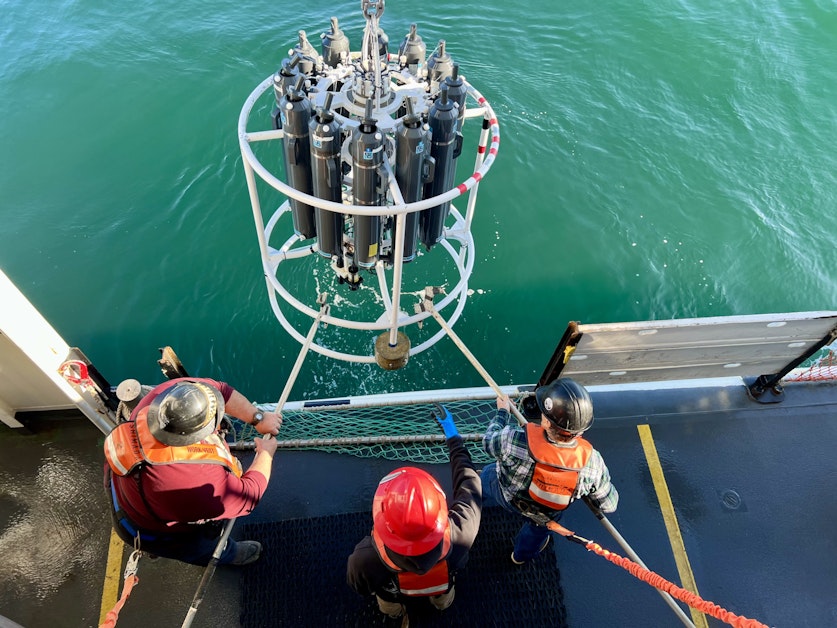 When you live on a research vessel, nothing stands still.

Not the cup of chai sitting on a vinyl-covered dining hall table. Not the plankton sample left on a stainless steel lab bench. Not the water lapping at the bottom of a shower.

Especially not the time.

That’s why the crew and officers of the Bell M. Shimada research vessel worked as a team and lived as a family, as they helped scientists on board search the ocean for answers.

“Before coming to the Shimada, I hadn’t been at sea for more than a few weeks,” said Jonathan Witmer, a survey technician with the National Oceanic and Atmospheric Administration, or NOAA.

Witmer and others stay at sea more than 220 days a year, not all of them straight away, which means a lot of time away from family and land. However, the crew and officers said they didn’t mind. They remain on this ship due to its scientific mission and the second family they have supported below decks.

“We’re in a workplace where when most people go to work, they just have to see those people for a while. Then they go home and reset. Here you live with these people. You become more forgiving,” he said.

The people aboard the Shimada are looking for another reset button.

Teams of two, including officers, crew members and scientists, tested their skill at throwing bean bags at least 30 feet into a small hole cut in a wooden plank. The first to score 21 points, without overtaking, wins. Any pouf thrown overboard, a distinct possibility when playing on the 44ft high flybridge, would have resulted in automatic disqualification.

The players strictly adhered to the official rules. A semifinal dispute was resolved via instant messaging on the National Cornhole Association’s website.

Other crew members released stress by squaring off on the chessboard each evening in the mess hall, quietly contemplating the moves while people ate snacks. The dining room offered many different types of snack foods people could crave, from gallons of ice cream to Flamin’ Hot Funyuns to an ever-rotating salad bar.

Often at night, people crowded into the ship’s six-seat cinema to watch movies during off-peak hours or when the ship was moving between sampling stations, sometimes a 20-hour journey. Moviegoers have often opted for charming, sometimes campy films, including the entire “Pitch Perfect” series.

While the mood was sometimes fun, work always took priority.

“It’s a tough lifestyle that may not be for everyone,” said Cmdr. Amanda Goeller. “There is no one who is not actively involved in carrying out day-to-day operations.”

During this voyage, scientists aboard the Shimada studied the ecosystem of the Northern California Current. Scientists hope to open a tiny crack in the black box of the ocean. With each survey, these onboard scientists continue to unravel the mysteries of the deep: the physical state of the ocean, how marine life survives, and what climate change could mean for the future.

This research takes time. The Shimada can stay on the ocean for about 40 days at a time, although the ship won’t stay at sea longer than three weeks, said John Wolfston, the ship’s chief engineer. Each voyage is limited by the amount of food the ship can store.

Plus, the ship basically functions like a small town – producing water, feeding the crew, incinerating garbage.

“It’s a city that can sink,” Wolfston said.

Although the ship would be refueled in port before sailing, the engineering team brought in everything they needed to fix anything that might be braking, while maintaining and monitoring the rest of the equipment that keeps it running. vessel.

“Over the past 30 or 40 years, fisheries science has increasingly used active acoustics to measure fish abundance near the ocean floor or in the middle of the water column,” said Hewitt.

Active acoustics means that instead of dragging tools and listening for noise, the ship sent out a signal to signal whatever was below, such as echolocation, which is a technique often used around the world animal by dolphins and bats. The Shimada’s acoustic array is one of three such systems in the world.

Additionally, the vessel’s design mitigated disturbance to marine life with a welded steel and aluminum hull, which minimized bubbles generated by the vessel. Motors and generators were mounted on shock absorbers. The walls were heavily insulated.

“So at the end of the day it’s a very, very quiet ship,” Hewitt said.

So quiet, compared to other ships, that the first time Hewitt came aboard to test the equipment, he didn’t realize the Shimada had left the San Diego pier.

“I was in my state room. Then I went down and things were going pretty fast,” he said. “We were gone, and I didn’t even know it.”

With equipment that pushes the limits, this vessel has followed in the footsteps of its namesake, fisheries biologist Bell M. Shimada, an internationally renowned scientist.

Shimada, born in the United States, was imprisoned in a Japanese internment camp in Minidoka, Idaho, in 1942. At the time, he was studying fishing at the University of Washington. A year after his incarceration, he enlisted in the US Army.

Among other research gigs after the war, Shimada worked for Pacific Ocean Fisheries Surveys in Honolulu, Hawaii, where he often traveled to sea on research vessels.

He then joined the Inter-American Tropical Tuna Commission, where he made a name for himself studying tropical tuna stocks in the Pacific, directing the first studies of tuna feeding patterns, distribution and spawning.

In 2007, a group of five freshmen from Marina High School in Huntington Beach, California named Shimada as the ship’s namesake.

“Today everything is shiny, bright and new again,” Allen Shimada wrote. “Bell Shimada could not have imagined a more beautiful legacy than the shared experiences of shipmates leading up to this day, and new ones in the days and weeks leading up to commissioning day and in the years to come. .”

And many shipmates have since shared experiences on this ship.

Boardholders saw the ship built in Mississippi, Goeller said. Everything on the boat had to be brought on board, a procedure known as the initial equipment list.

“Think about every spoon, every pillow, every block. Everything that had to come on the boat, we had to organize and assess,” Goeller said.

Next, the crew brought the Shimada through the Panama Canal so they could conduct research studies on the west coast. For all the original crew, crossing the Panama Canal at night was a highlight of their time on board.

“This whole experience I will never forget,” McFarland said some 12 years later.

“Right now they’re struggling to staff these (research) vessels because there’s a lot of demand for seafarers,” Hewitt said. “A lot of them work for NOAA because they love the mission, which is why they prefer to work on a vessel that assesses how many fish there are and how many can be caught sustainably rather than carrying oil or cargo. “

Those aboard the Shimada appreciate its unique culture, often referred to as “Shimadatude,” said Lt. Cmdr. Justin Ellis.

Survey voyages can seem long at the time, but the days pass quickly as everyone on board works to help the science team get the information they need, he said.

Additionally, Ellis said, the ship’s crew and officers are very proud of the success of the scientists’ work. Plus, he says, this is how the crew helps the fishing communities where they live.

“We are not all scientists. We don’t all understand the biology of fisheries. We don’t know all about copepods and plankton. But everyone who works on this ship has chosen to work on a research vessel,” Ellis said. “The vast majority, if not all, are here because they feel good about the job they do.”

Learn more in this series:

Part One: To unlock some of the mysteries of the ocean, scientists set sail