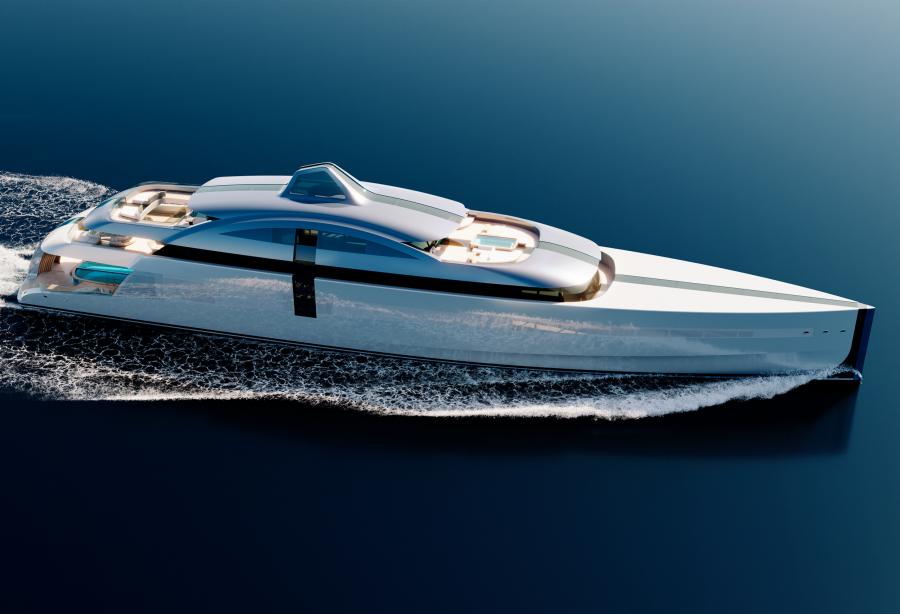 Feadship created the concept yacht called Slice at the opening of the Monaco Yacht Show. A revolutionary 85-meter yacht tackles one of owners’ biggest complaints in yacht design: long hallways, dark interiors and stacked living spaces. Designed with a strip of glass running entirely from bow to stern, allowing natural light to filter through multiple decks, Slice “turns the inside out and the outside in,” says Chris Bottoms , lead designer of Studio De Voogt, and Tanno Weeda, head of design.

For this concept, Feadship set out to completely reinvent a yacht from the inside out. The designers sliced ​​their CAD model along the centerline and parted the halves to make way for a strip of glass running from bow to stern. It is not glass alone, but glass covering a structural frame that lets natural light filter in through several bridges. It is a much more difficult plan than a series of skylights; it totally redefines the relationship between spaces throughout the interior of the yacht. 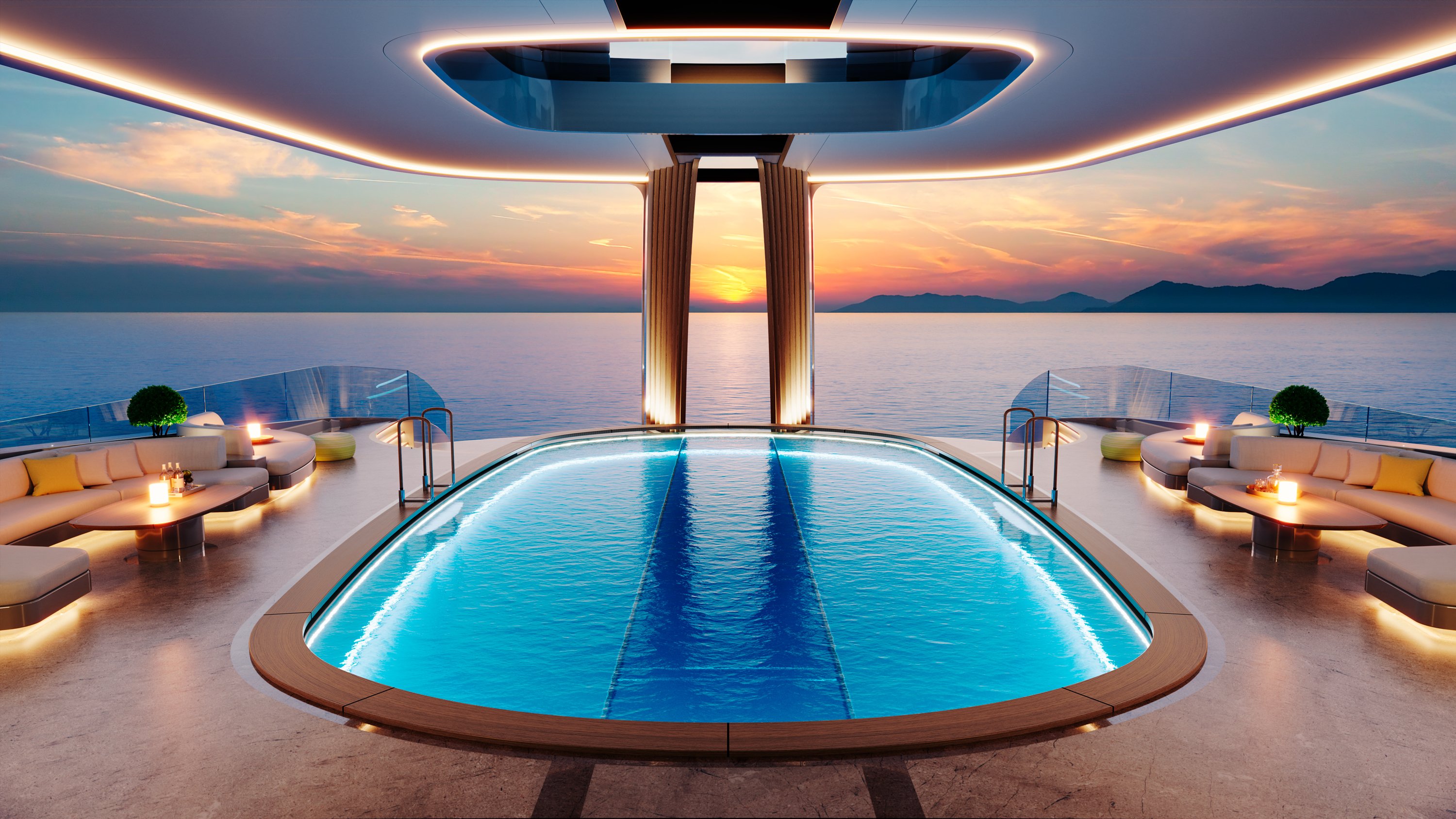 The mandate of the engineer and design team was to challenge the zeitgeist of typical yacht layouts by studying natural light and vertical spaces. Specifically, the brief called for a “linear transition from mountain to sea”. 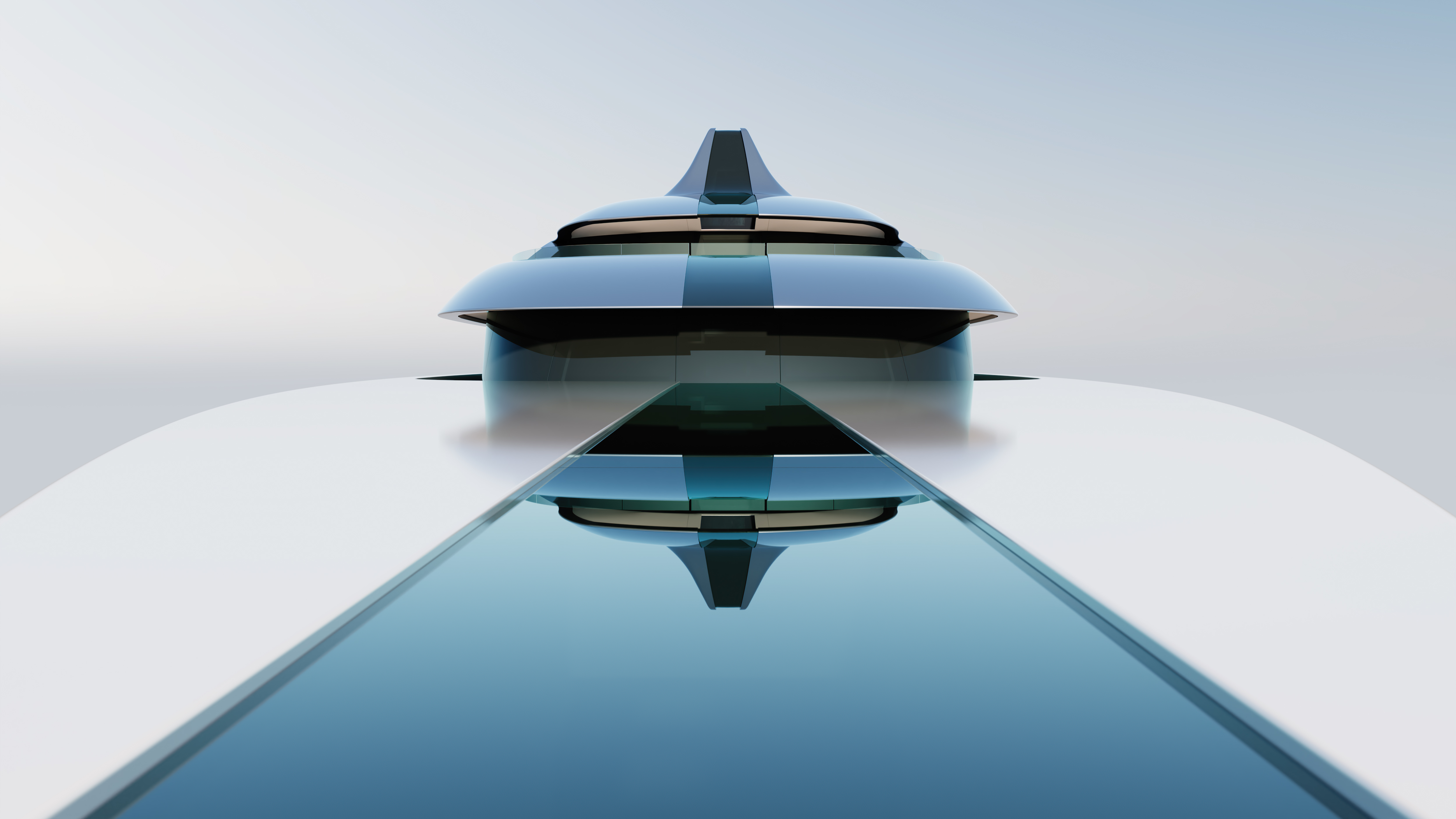 Having a slice in the middle opens up endless possibilities for space and lighting. Hallways become more than just hallways from one space to another – they serve their own purpose and become enjoyable spaces in their own right. 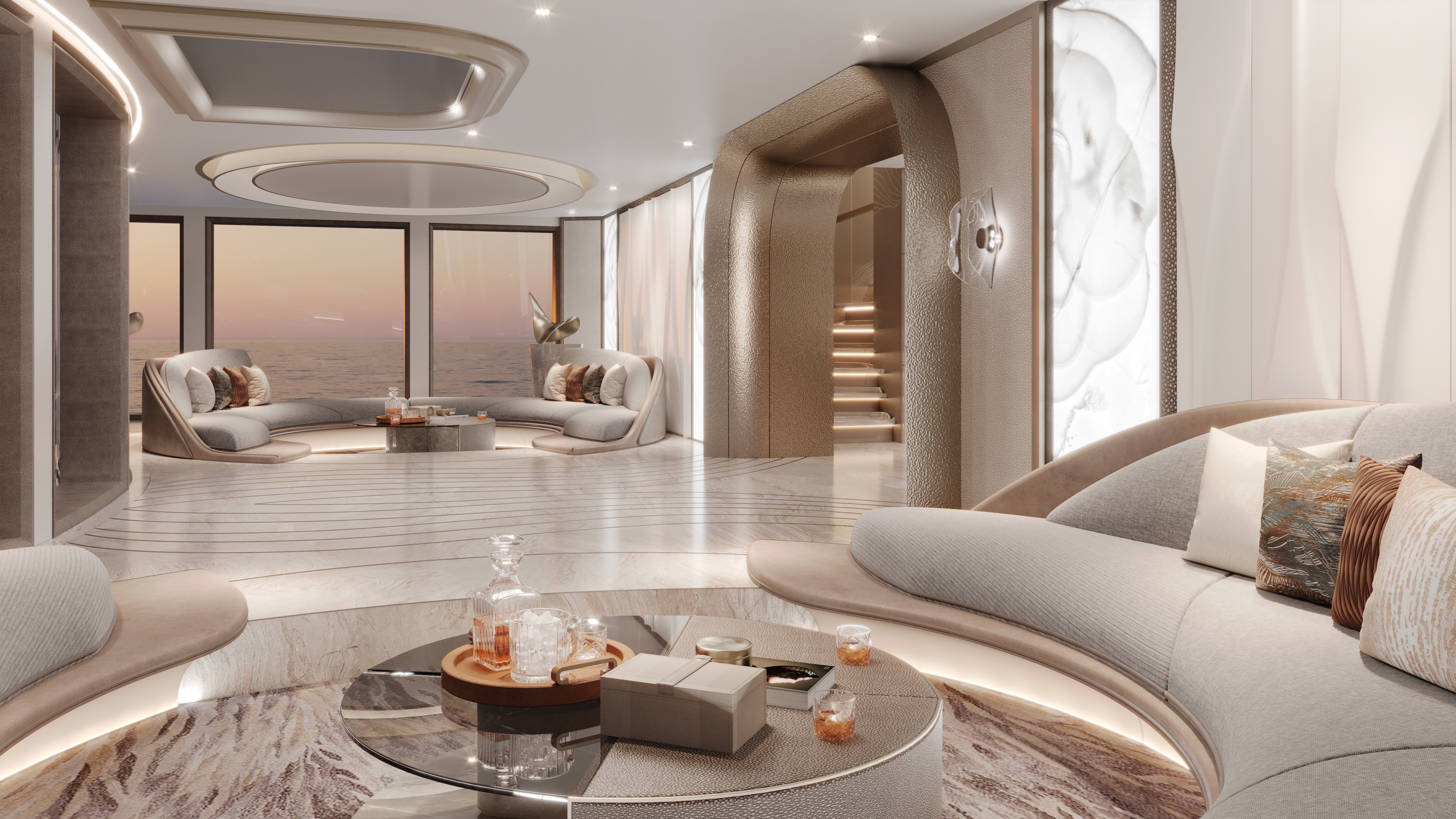 The heart of the yacht is the 70m² atrium on the main deck level. Uninterrupted by a staircase, the atrium is more than a hall but a destination in its own right for guests moving back and forth. Its cascading circular balconies open up a wide range of possibilities for lighting and art installations. 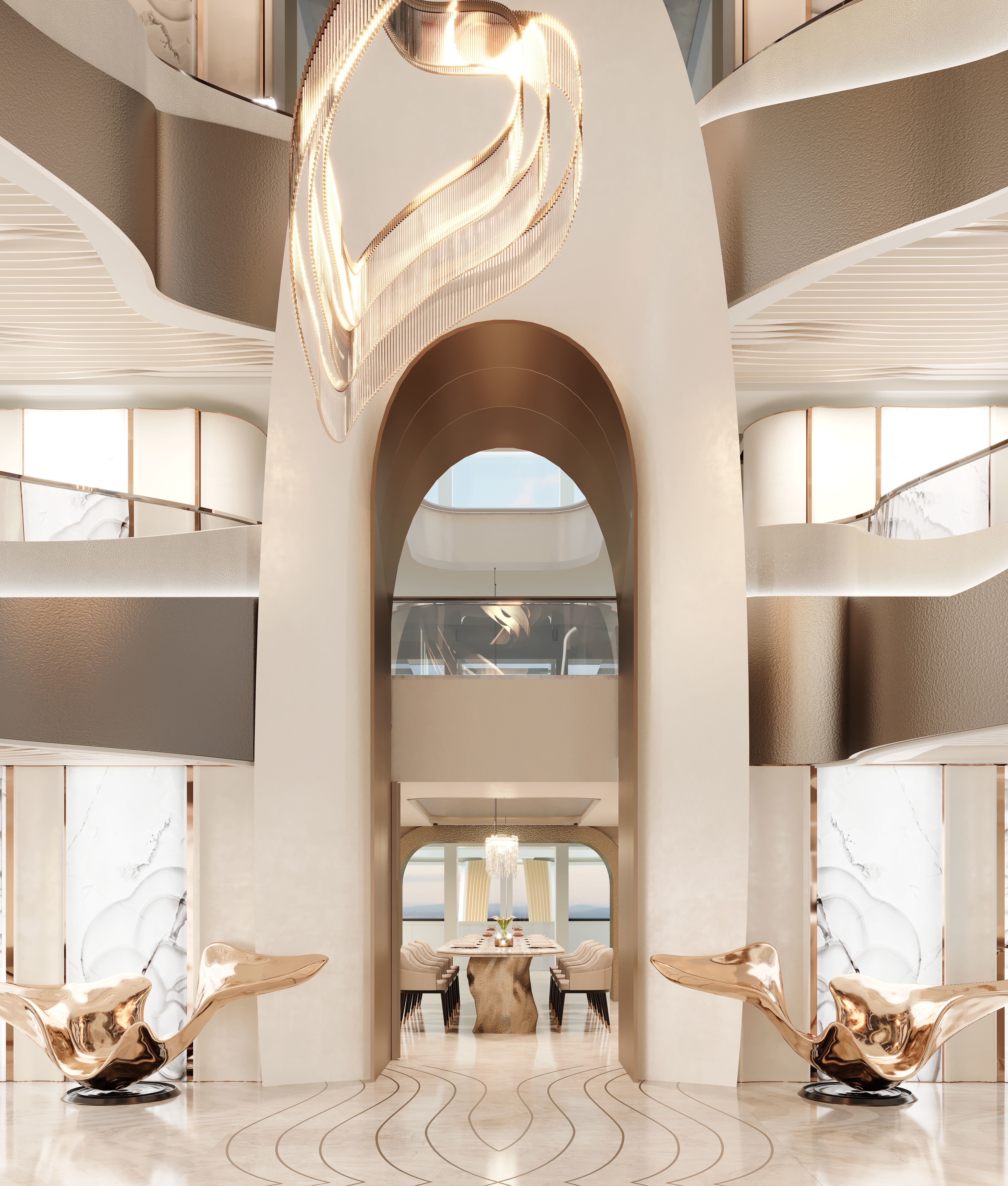 A 10 meter long swimming pool designed using data science. Often used to determine hull efficiency, comfort at sea and calculations at anchor, the design team adopted data science to define the shape of the pool and the placement of hidden shock absorbers to overcome slosh. Equally impressive is the use of ultra-high modulus material inspired by Formula 1 research into high-strength carbon fiber. While F1’s high tensile carbon fiber was not stiff enough for yachting needs, the De Voogt team worked with carbon fiber manufacturers to develop their own modulus-specific material. ultra-high. “The strips we bonded to the main beams of a wheelhouse deck have twice the stiffness of steel, but less weight than aluminum.” The material is already in use at Feadship yards, giving the design team the confidence to incorporate it into the atrium, multi-level walkways and frame of the long glass inserts on Slice’s upper deck. 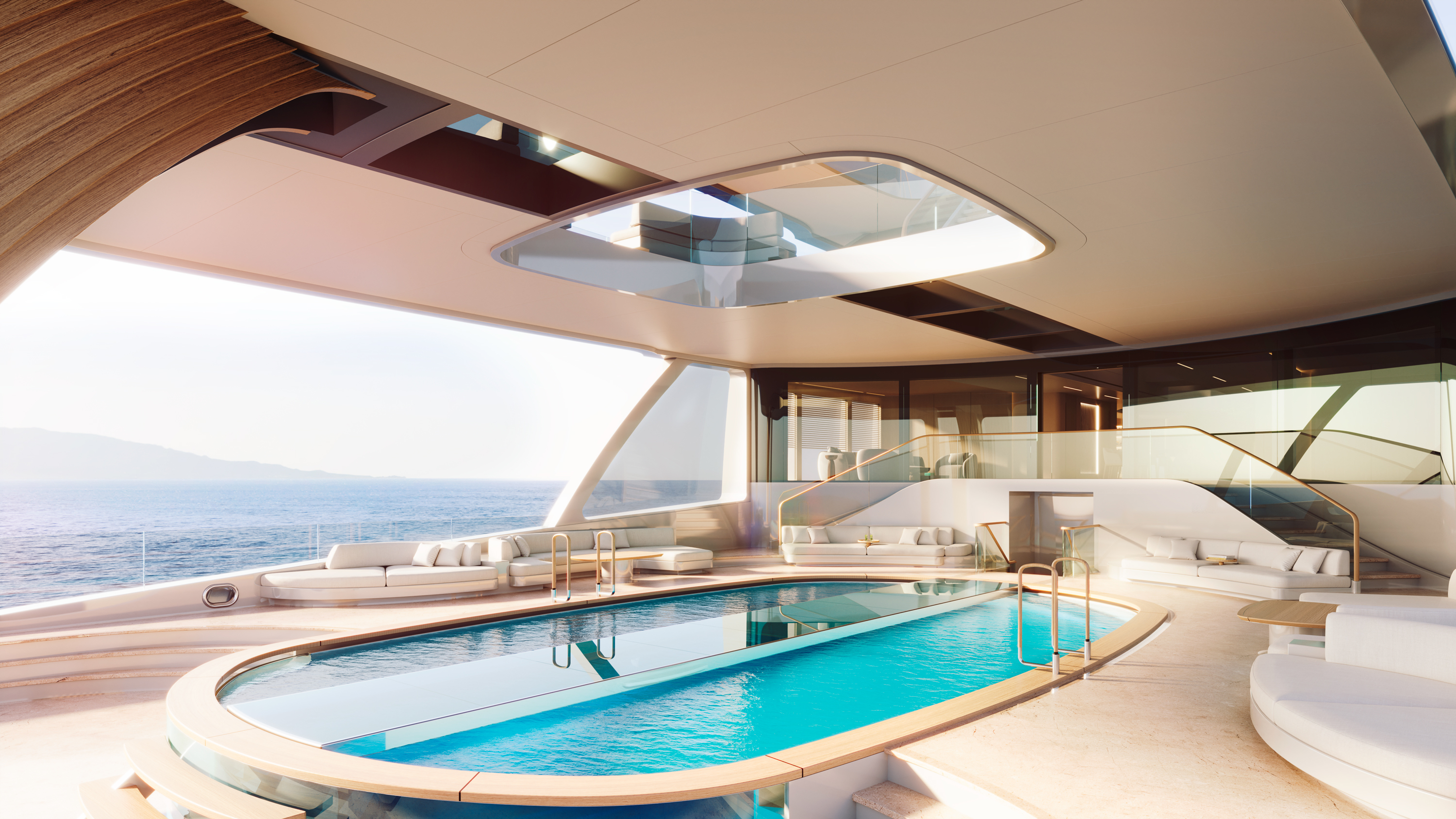 Slice’s propulsion system will be powered by four dual-fuel generators which have been modified to run on both methanol and non-fossil diesel (hydrotreated vegetable oil – HVO) and the power generated will be supplied to two azimuth pods. HVO should be used as a pilot fuel to aid in the combustion of methanol. Due to the lack of global methanol supply points, more than necessary HVO capacity was accommodated to increase the HVO-only sailing range. This allows methanol to be used sparingly when low until the next methanol supply point is reached and also allows world cruise. The option of replacing one of the generators with methanol fuel cells exists, which would generate electricity to help support the ship’s hotel load. A network of batteries, powered by the two generators, and the fuel cells allows for quiet low-speed cruising and reduced generator peaks. 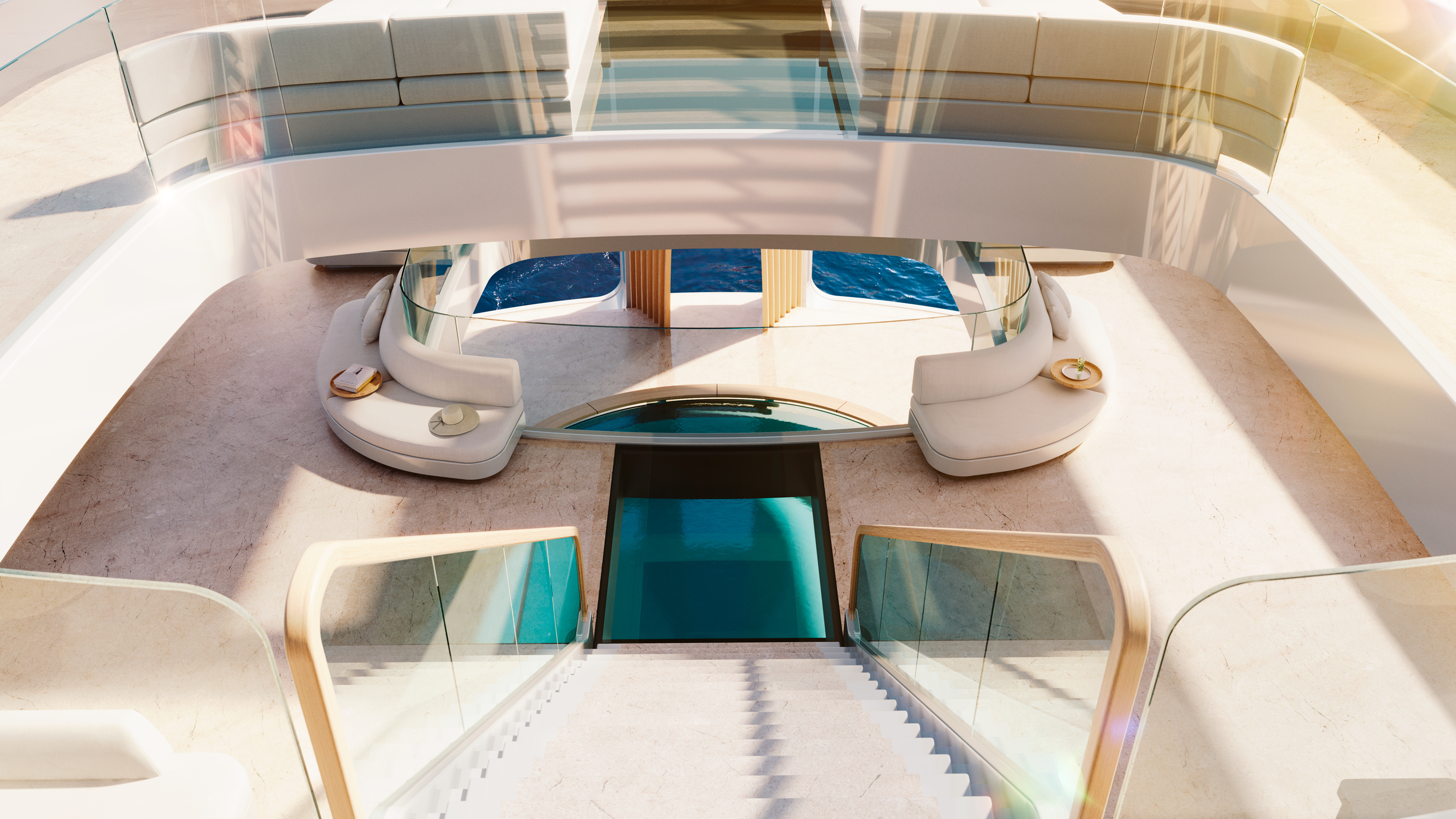 To conceptualize Slice’s interior, Feadship turned to Dutch designer Marco van Ham and asked him to avoid teak altogether. Instead, Van Ham and his team brought a palette of backlit marbles and onyxes, surfaces formed from liquid metals, silver leaf, shagreen, straw marquetry and even pyrite with juxtapositions of glossy and matte surfaces. Warm neutral fabrics evoke a spirit of calm relaxation. Wavy lines inform the floors, and most furniture reflects organic shapes and is kept low to avoid obscuring views. What you won’t find on the Slice concept interior are square doors and box-like pieces. 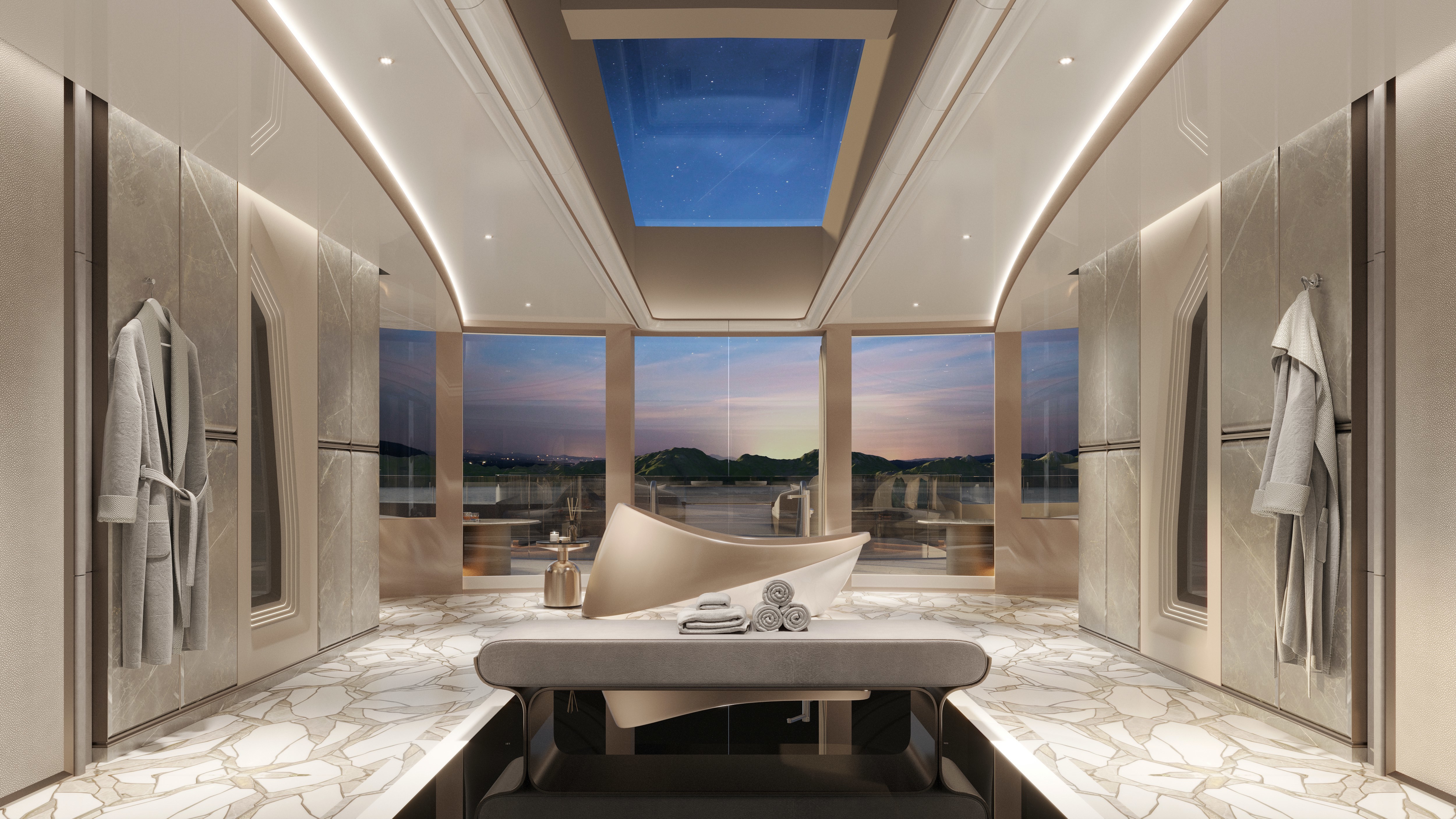 With Slice, Feadship wanted a yacht that specifically answered a recurring request from the owner: an open and private aft swimming pool and sunbathing areas with sea views and out of sight of passers-by and delivery people when moored in port. Slice achieves this with a fully engineered gangway and a watertight forward entrance so it can be moored forward. At the push of a button, a full-height section of the stem at main deck level opens and a walkway unfurls, guests take a short stroll from the dock, disappear into the privacy and safety of the interior and arrive first in a reception area forward of the yacht’s tender bays. 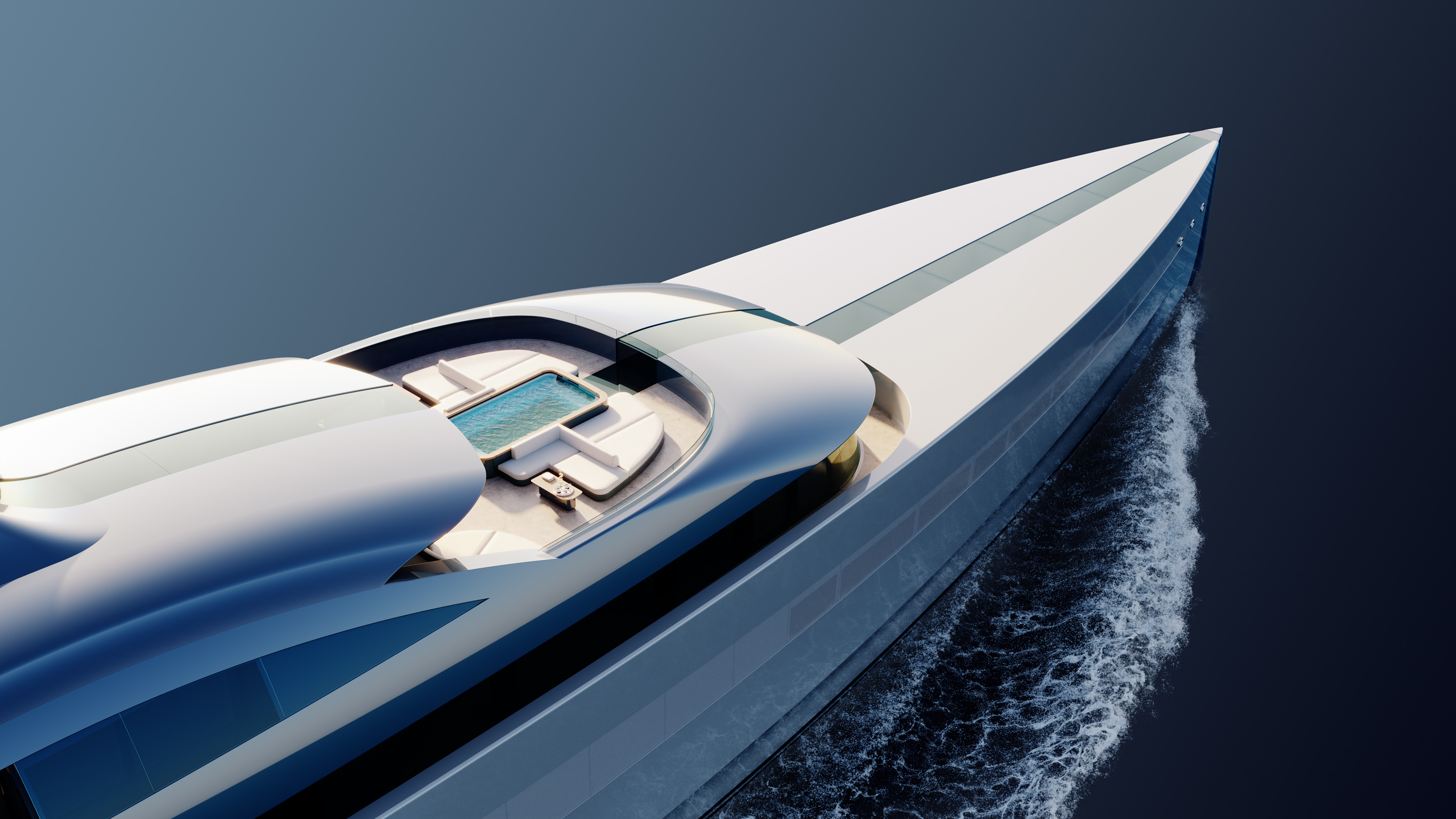 Feadship was formed as a group in 1949 as a marketing partnership between six Dutch shipyards, de Vries Lentch, Van de Stadt, Witsen & Vis, Akerboom, De Vries Scheepsbouw and Van Lent Shipyard, and De Voogt Naval Architects. Feadship is well known as one of the most elite yacht builders in the Netherlands and offers superyachts from 50 to 100 meters in length.