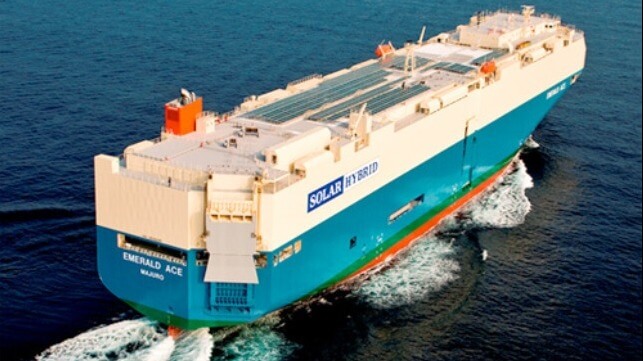 Japanese company Mitsui OSK Lines recently completed testing of a new device developed with Miura Co. that can continuously collect microplastics from seawater while a ship is underway. The device, which builds on the companies’ earlier efforts to filter out microplastics while ships are docked, was demonstrated last month on the MOL-operated car carrier emerald ace.

In an effort to collect microplastics, which are increasingly polluting the world’s oceans, MOL and Miura worked together to design devices that capture small plastic particles in seawater.

The first system launched in November 2020 collect and trap participles with a filter with backwash function, which is integrated into the ballast water treatment system. Ballast water treated for discharge passes through a fine filter that traps plastics before the waters leave the ship. After a successful test on a woodchip carrier, MOL installed the system on five vessels, including three bulk carriers and two woodchip carriers. While these ships unload the ports, the systems treat a total of approximately 16,000 m3 of seawater.

The new system extends this capability by continuously filtering seawater while the vessel is underway. According to the companies, the addition of a centrifuge allows the device to efficiently separate floating microplastics from concentrated seawater with a high density of floating debris, without closed plumbing. This makes it possible to further filter a seawater pipe, which continuously draws in seawater, and to treat all of the water discharged after passing through the filter with the system’s backwash function. ballast water treatment. 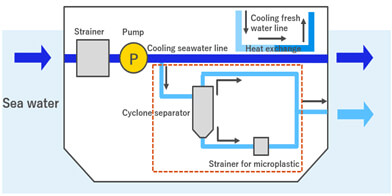 On the emerald acemicroplastics were collected continuously during navigation, by connecting the system to the cooling seawater pipe, which always draws seawater. This gives the system an annual water treatment capacity of sea ​​about 70 times greater than that of the previous device.

The MOL also collects data on the levels of filtered microplastics. They report that there is a growing demand for this type of data among research institutions, as this data can be applied to research on the movement of microplastics. The data also allows the effects of various pollution reduction approaches to be measured. MOL collects data such as components, quantities, locations and periods of microplastics collected with the device for future research.