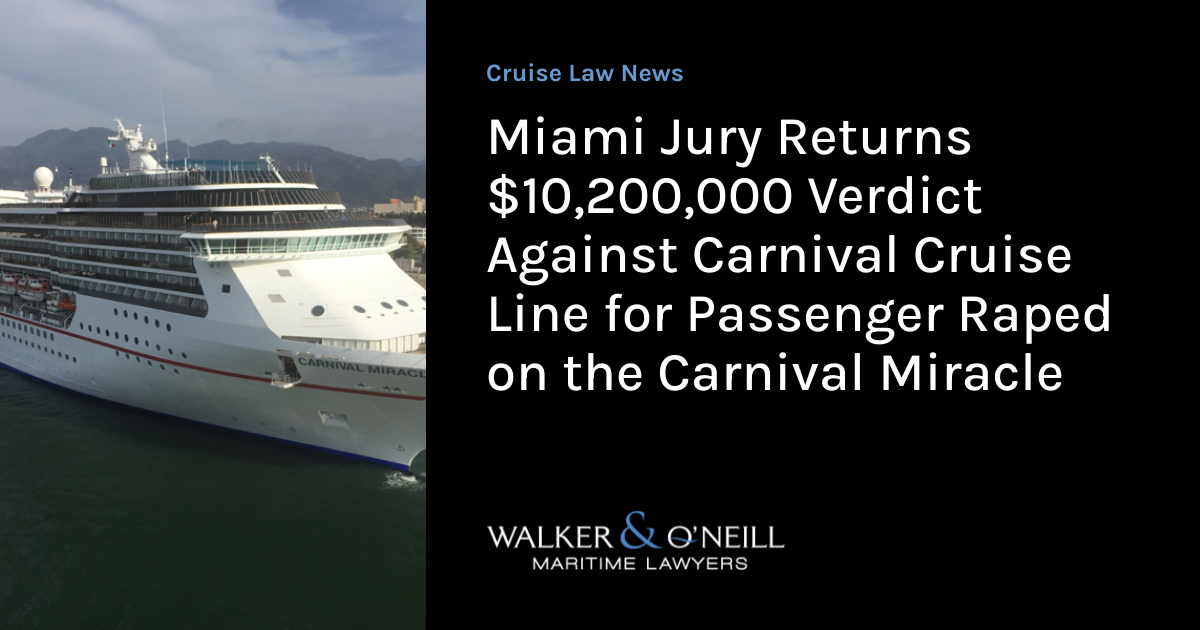 A jury in the case of Jane Doe v Carnival Corporation d/b/a Carnival Cruise Line Case Number 19-24766, pending in federal court for the Southern District of Florida, returned a verdict in the amount of $10,200,000 on July 18, 2022 for a passenger who was raped by a crew member on the Carnival Miracle.

The highlights are contained in part in a decision of a federal magistrate who ruled on various pretrial motions filed by the parties and reported in Doe v. Carnival Corporation 2021 WL 7540787. In relevant parts, the decision states:

“Jane Doe was a passenger on Carnival’s ship, Miracle, and in the early hours of December 2, 2018, she alleges that Carnival crew member Fredy Anggara raped her in a storage closet.”

“On the last night of the cruise in question, Jane Doe climbed a stairwell. At the top was a CARNIVAL employee (see photo taken in discovery);

Once Jane Doe reached the top of the stairs, the employee involved pulled Jane Doe into a (maintenance) closet. He entered the closet with her, locked the door, raped her and ejaculated on her;

Afterwards, he unlocked the closet door and let DOE go;

Jane Doe immediately rushed to her room. The assailant caught up with her and asked her to let him into his room. Jane Doe declined his request;

Once Jane Doe reached her room, she burst into tears and told her friend what had just happened.

Jane Doe and her friend went to get help and report what had happened;

Jane Doe located employees of the defendant to report the crime;

Cruise staff members placed Jane Doe in a wheelchair and took her to the ship’s medical facility where staff used a rape kit on her and gave her medication to consume in order to combat the sexually transmitted diseases she might have contracted during the rape.

Jane Doe suffered many bouts of humiliation following the medical examination where she had to walk through dozens of passengers waiting to disembark from the ship. They ogled her as she walked through them wearing just a t-shirt as she had no clean clothes to wear; and

After the cruise, Jane Doe followed up with CARNIVAL to see if the employee in question had been fired, if any disciplinary action had been taken and/or if he had been arrested. CARNIVAL did not answer.

Upon discovery, Carnival responded to the rape by claiming through its representative Suzie Vasquez (a lawyer) that on Carnival’s cruise ships, allegedly “sexual assaults are actually very, very rare.” . .”

Before the trial, Carnival tried to bar notable cruise expert Dr. Ross Klein, who is the author of the popular CruiseJunkie website, from testifying about the frequency of rape aboard Carnival cruise ships. Dr. Klein has previously testified as an expert before both houses of Congress regarding issues of crime on cruise ships. His opinions are attached. Jane Doe’s attorney sought to elicit evidence from Dr. Klein that Carnival noticed that Mr. Anggara, Carnival’s attacker, was likely to assault passengers. Carnival attempted to block Dr. Klein’s testimony that:

In an order dismissing Carnival’s motion in its entirety, the federal magistrate ruled that Dr. Klein was qualified, that his methodology was reliable and that his testimony was useful to the jury.

Jane Doe’s attorney filed a motion seeking sanctions against Carnival for what he alleged was the willful misconduct of Carnival’s defense attorney and the cruise line representative (see Exhibit 303).

In the year before COVID-19 crippled the cruise industry, there were more than 100 sexual assaults on cruise ships, according to DOT cruise crime statistics which break down as follows: :

I attended a 2007 hearing before Congress regarding cruise ship crime where a senior FBI official testified that only 7% of sexual assaults on cruise ships are prosecuted in federal court.

This low prosecution rate is due to the FBI’s historical reluctance to get involved in sex crimes at sea, the cruise industry’s tendency to sweep crimes under the rug, and the unwitting or intentional destruction of evidence on cruise ships.

The US Congress has studied the issues of rape aboard cruise ships. The cruise industry trade organization CLIA has argued that cruise ship crime rates per capita should be based on the total number of people cruising in a year (about 30,000,000 people). cruises this year) rather than the average number of people occupying cruise ships on any given day. . By analogy, per capita crime statistics for US cities are calculated based on the number of people in a city. Tourists who visit the city during the year are obviously not counted as residents. Imagine how crime statistics for New York City would be diluted if, instead of calculating crime rates based on the number of people in the city (about 8 million), that number was inflated to include each of the most of 60 million people who visit the city every year. The per capita sexual assault rate on Carnival ships of 40 per 100,000 is significant. (Please note that this is my opinion based on the data I have reviewed; this is not necessarily the opinion of Dr. Klein). That’s a higher per capita rate than California, New York, New Jersey, North Carolina, and Georgia (and more than a dozen other states). The rate on Carnival ships is higher than the average rape rate per capita in the United States, which is about 27.

Jane Doe is represented by Miami attorney Daniel Cortney. This is a significant verdict that demonstrates the seriousness of the case and the victim’s injuries. Kudos to Mr. Courtney and his staff for their excellent work on this case.

Do you have a comment or a question? Please leave one below or join the discussion on our Facebook page.