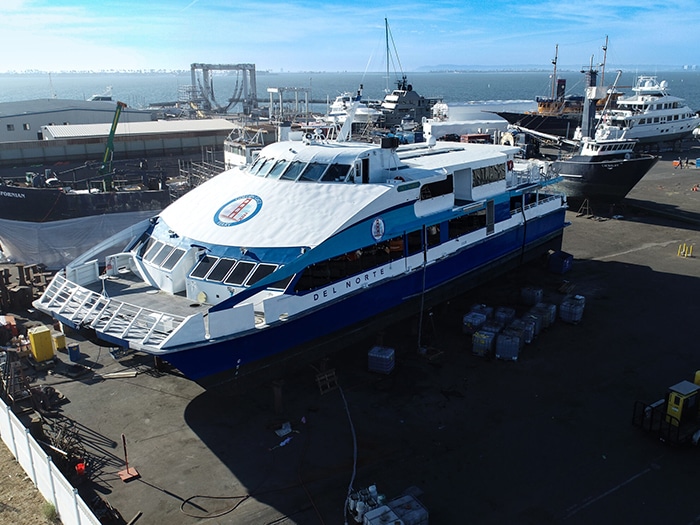 MBBW competed with an out-of-state shipyard to win the complex contract that required highly technical and unique experience and skills.

One of the few remaining shipyards on the West Coast with the facilities, resources, and skilled labor necessary for such a project, MBBW successfully transported, maintained, and launched all four vessels inspected by the Coast Guard. America before a very demanding schedule. This was accomplished, in part, by using its 665 ton mobile travelift, one of the most environmentally friendly of its kind in the world, with a CARB Tier 4 engine.

The Del Norte and Mendocino were maintained consecutively followed by the golden door and Napa which were served simultaneously.

Each of the vessels was delivered by the crew of MBBW, including MBBW President Todd Roberts, a Cal Maritime graduate with a USCG license for vessels up to 1,600 tons, who brought the Napa among others down San Francisco.

Although all ships have undergone routine maintenance and inspections required by the USCG and upgrades to some of its systems, the Del Norte and Mendocino the projects were much larger and more complex.

The Del Norte was the first ship to be serviced and lasted three months. The scope of work involved major removal and replacement of four MJP waterjet engines, updating of communication systems, servicing of shaft seals and seawater cooling systems, minor engine repairs and the application of new hull paint. The ship was launched in early 2021.

The Mendocino was completed in mid-December 2021 and took over 20,000 hours of work. The Mendocino had the most work done with major structural repairs which required MGBW to carefully remove the superstructure from the hull. This involved the crew of MBBW using the 665 ton travelift to lift the ship and pin it above ground. They then placed longitudinal beams and supports under the superstructure. After unbolting all 100 raft supports, they used the travelift to lower the hull away from the superstructure, separating them so work could be done between the two structures.

golden door and Napa were the third and fourth ships to arrive at MBBW and each took approximately four months to complete. These two vessels required the least amount of work with only routine US Coast Guard maintenance and inspection. golden door launched mid-May 2022 while Napa launched end of June 2022.