MARTINELLO: ‘It’s in the blood’ for Lake Erie commercial fishermen 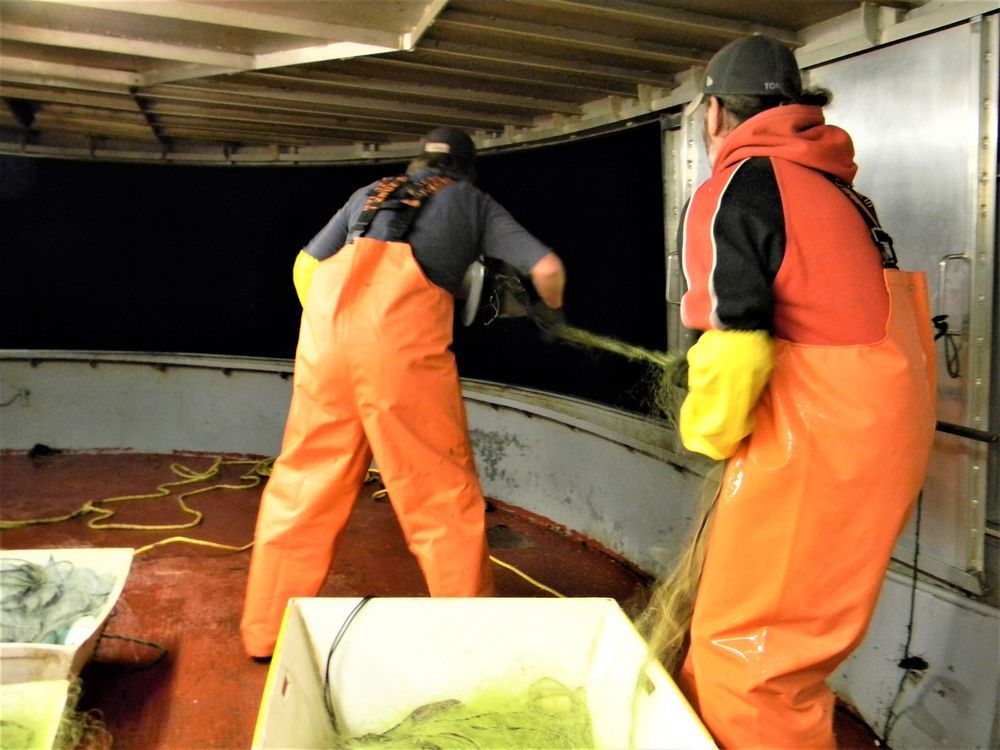 “I love that you can see the sun rise. It really doesn’t feel like a job. I’m with my family. It’s in the blood.”

–Curtis Mummery, crew member of the Lady Anna II, answering the question: “What do you like most about commercial fishing?”

It’s about 6:25 a.m. on Tuesday, March 29 on the absolute calm of Lake Erie. The Lady Anna II points due south, about 10 miles due south of Kingsville and five miles northwest of the north shore of Pelee Island.

In the wheelhouse, Captain Mike Mummery slowed the Lady Anna II to a one-knot crawl. Craig Adamson and Josh Mummery are at the starboard “picking” station amidships, removing 2,000 pounds of pike from more than a third of a mile of net hauled on board just 35 minutes ago.

James “Marty” Martin and Curtis Mummery stand by the open sliding doors of the port aft hatch. ‘Marty’ faces the stern, just forward of the ‘Roller’; a metal coil mounted vertically on a metal pole. At his feet are crates loaded with empty, clean sections of net 150 meters long. The end of one of these netting boxes is draped over the roll, towards the stern.

Curtis stares, intently and motionlessly, toward the wheelhouse door. Except for the purr of Cummins diesel and the hum of rock and roll music, all is quiet.

And then, almost as quickly as the eye can see, Curtis raises the signal buoy in the pre-dawn darkness of Lake Erie. The first “set” of the day has begun.

Within seconds, the line from the marker buoy to the net’s anchor passed over the steel gunwale, and just before that line was taught, Curtis threw the 30-pound net’s anchor from the dish. -edge in the frigid depths of Lake Erie. In about five seconds, the net’s anchor plunges through 35 feet of water and sinks into the muddy silt of Lake Erie’s clay bottom. A few seconds later, the line connecting the net anchor to the end of the first gillnet box is taut.

The momentum of moving 100 tons of aluminum, steel, diesel engine, machinery and freshly caught pike that is the Lady Anna II pulls against the anchor of the net. Net spins on the roller, descending into the depths.

‘Marty’s’ hands move as fast as he can move them – hand over hand, guiding the net onto the roller, making sure it enters the water without twisting.

As the 160 yards of netting in one box draws to a close, Curtis – again, almost as quickly as the eye can see – connects it to the end of the next netting box, with a line connected to a 30 pound net. anchor. Curtis brings that crisp anchor and line to the stern and, just in time, lifts them into Lake Erie.

For 15 minutes, a gust of 640 yards of net, five net anchors, 24 “cans” and two signal buoys flowed from the stern of the Lady Anna II. And in all the apparent confusion of netting and netting lines and anchors, barely a word passes between “Marty” and Curtis – each knows exactly what the other has to do.

At 6:40 a.m., Curtis closed the port aft hatch. The first series is over. “Marty” and Curtis join Craig and Josh picking fish from the nets brought on board during the first “shot”.

Maybe it was the combination of darkness, calm water and Capt Mummery’s deft handling on the Lady Anna II – I’m not sure. Although I knew that the Lady Anna II never stopped moving, I had absolutely no idea where we were or in which direction we were traveling.

So, halfway through the first set, I had the idea to go to the wheelhouse to see what Captain Mummery was seeing and ask where we were. So I turned forward from the starboard mid position, where I had photographed “Marty” and Curtis staring at the net. As I turned forward, towards the bow, the answer to a question that came to mind when I boarded the Lady Anna II came to mind.

Bolted to the frame of the sliding door hatch that is the entrance to the wheelhouse is a mirror that looks like it belongs on a tractor or small truck. Wherever it is, this mirror is out of place on the Lady Anna II. But appearances can be deceiving.

I have come to realize that this mirror is exactly where it belongs and serves a very important purpose. Every time the crew sets the net, Captain Mummery – silent and invisible in all the buzz and glow of electronic magic in the wheelhouse – stares at that mirror like a hawk.

As soon as I understood the purpose of the mirror, I realized how dangerous the board I had been looking at could be. That if you were caught or tangled in the anchor line or netting running over the stern, you could easily be pulled over the gunwale and into the depths of Lake Erie. And that even if someone shouted “Back Up” or “Man Overboard”, it would be hard to stop the Lady Anna II’s 100 tons of momentum and three-foot-diameter propeller.

I decided not to go to the wheelhouse until the decor was finished. Turns out it was a smart move. And not just because Captain Mummery had to keep a close eye on “Marty” and Curtis as they stared down the net.

As I discovered later, the net was set in the Lake Erie shipping channel; that set of boundary lines on navigation charts that mark the course, where it’s normal to see 740-foot-long, 12,000-horsepower Great Lakes freighters cruising at 15 knots to and from the Detroit River. The largest of these vessels – the 1,013 foot long, 17,120 horsepower Paul R Tregurtha – sails these waters. Despite their size and power, these ships are very quiet. During the set, Captain Mummery had to look back towards the stern, towards his radar and everywhere else on the horizon. Always vigilant and like a hawk.

Rarely spoken of, but never far from the surface, is the tragedy of March 18, 1991. Just 12 miles south of Captain Mummery’s hometown of Port Dover in Long Point Bay, the Canadian Coast Guard vessel Griffon , plowed – at her full speed of 11 ½ knots – into the Port Dover-based fishing vessel Captain K.

It’s around 6:45 a.m., the set is over. I climb the two steps of the wheelhouse. The sun is still below the horizon, but the curtain of darkness has lifted. Just above the horizon shines a streak of red sky. Just below this streak, Point Pelee extends like a pencil line and a flat pancake into Lake Erie to become the southernmost point in mainland Canada. The Lady Anna II is pointed north, towards the house. But the job is only half done.

More information on board the Lady Anna II in part 4 of this story.