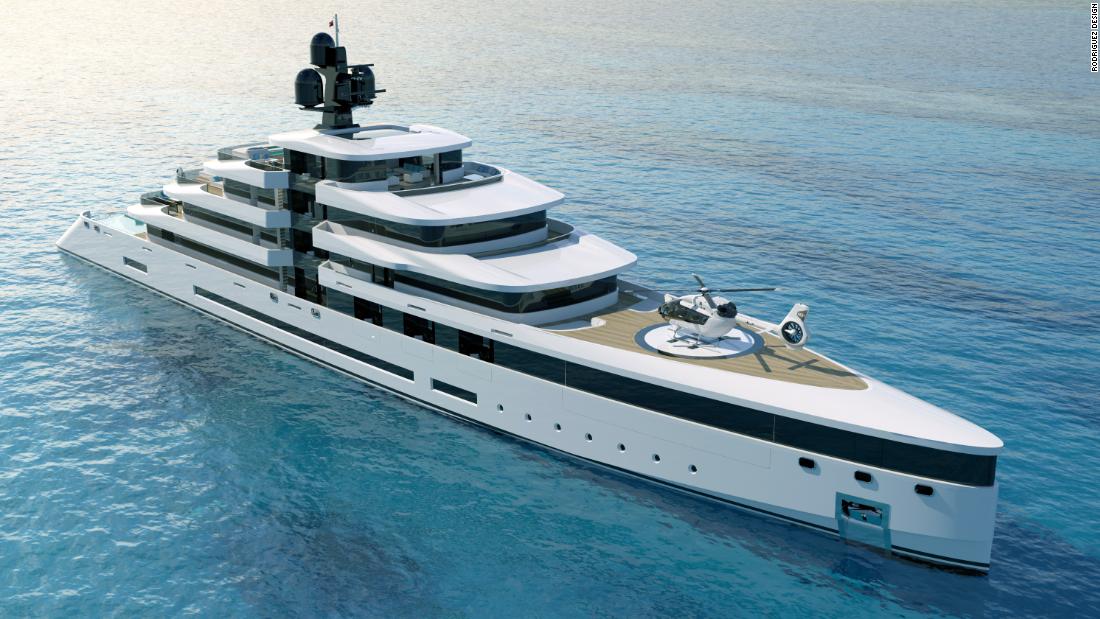 (CNN) – Gigantic superyachts have long been nicknamed “floating skyscrapers”, but this innovative new concept from studio Rodriguez Design has taken that notion to a whole new level.

Measuring 110 meters, Malena is designed in the style of a high-rise building, with a symmetrical superstructure made up of balconies extending on both sides of its decks and down the middle.

Made of steel and aluminum, the ship will feature ample outdoor spaces to encourage outdoor living, as well as a hydraulic swim platform for easy access to the ocean.

A rendering of the Malena concept, which has a central balcony system similar to a luxury residential building.

Designer Josh Rodriguez, founder of Rodriguez Design, says he took inspiration from a variety of different architectural structures to develop Malena, taking an “architectural approach” rather than that of a more traditional yacht.

“With the side balcony system, we wanted to create the feeling of being on a super luxury skyscraper,” says Rodriguez. “Wherever the yacht is moored or moored, the city will have a new addition to its skyline.”

In addition to her “sleek and sharp profile”, Malena has a number of impressive onboard amenities, including two infinity pools, and will accommodate up to 24 guests in her 11 cabins, including six VIP cabins on the main deck. .

The designers took an “architectural approach” rather than the traditional yacht design when designing Malena.

Its upper deck includes a dining room large enough for 24 people, a lounge area and a touch and go helipad.

Entrance to the owner’s deck can be blocked with a set of sliding doors to allow as much privacy as possible, but those who are invited will have access to a Jacuzzi and a huge solarium. There is also a sundeck on board with another jacuzzi, as well as a bar.

As for its engine, Malena will be powered by a hybrid diesel-electric propulsion system, reaching a top speed of 18 knots and an estimated range of 6,000 nautical miles cruising at 12 knots.

The ship’s solarium is equipped with a jacuzzi and bar.

“The power of these azipods comes from electricity and not directly from the engine itself. This electricity is created by alternators connected to diesel generators.

“These generators can be placed anywhere on the yacht, not necessarily in the typical engine room position, and can be further isolated from sound and vibration, creating a very smooth yacht.”

According to Rodriguez, Malena is already attracting interest from customers and shipyards and further discussions are underway.

While the project is still in the very early stages of development, he estimates the superyacht will likely cost over 350 million euros (around $ 396 million) to build.

Although the process of engineering, building and delivering the ship takes between three and four years “under normal circumstances”, the demand for superyachts is now higher than ever.

Designer Josh Rodriguez estimates that Malena will cost more than 350 million euros to bring it to life.

“The shipyards are extremely busy right now, with delivery dates starting in 2025 (the closest) and raw materials increasingly expensive, delayed or canceled all together,” he told CNN Travel. “With the current situation it’s very difficult to guess.”

The Malena Concept is one of many impressive superyacht designs unveiled over the past year as the popularity of larger ships continues to grow due to the growing number of emerging billionaires around the world, as well as the impact of the pandemic.

In October, Lazzarini Design Studio unveiled renderings of Shape, a new 69-meter yacht design with a “gaping hole” in its center.

Meanwhile, the German shipyard Lurssen launched an emission-free superyacht concept that was inspired by Lewis Carroll’s “Alice’s Adventure in Wonderland” at the Monaco Yacht Show in May.