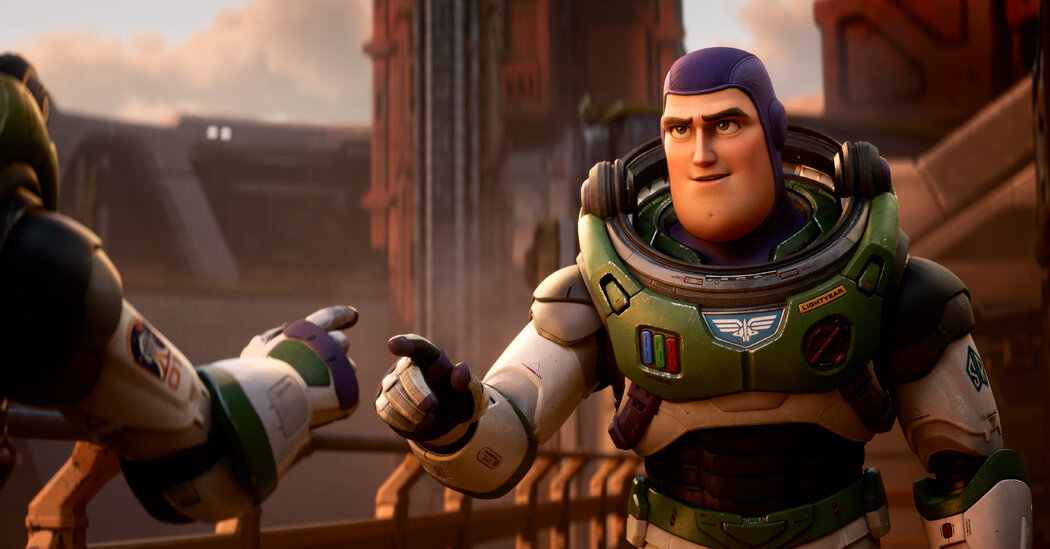 The simple and charming premise of “Lightyear” is explained in on-screen text. “In 1995, a boy named Andy received a toy from his favorite movie. It’s that movie. In other words, it’s the origin story not of a hero but of a commodity, a piece of merchandise that started off as fictional but has long since crossed the line into real life. More than one hard plastic Buzz Lightyear has lived in my house for a long time, as did Andy’s. Be part of the “Toy Story” universe , is to know intimately the metaphysics of commodity form.

This Buzz is a little different, however. He’s not a toy, and he doesn’t sound like Tim Allen, who did the voice work in all four chapters of Pixar’s “Toy Story” cycle. He’s a real live-action animated Space Ranger, and he speaks in the manly baritone of Chris Evans, who played Captain America in the Disney Empire’s Marvel Universe area.

Like Cap, Buzz is square-jawed, stoic, and clouded with a hint of melancholy – a soulful soldier in an endless corporate campaign. If “Lightyear” lacks both the sublimity and dizzying inventiveness of the best “Toy Story” films, perhaps that’s by design. It’s not meant to be a 21st century masterpiece, but a kid-friendly movie from 1995. (That was a pretty good year for commercial cinema, by the way.) The Buzz Lightyear toy was meant to stick after the film has been forgotten, and to populate a richer and more varied fantasy landscape.

“Lightyear,” directed by Angus MacLane from a screenplay by Jason Headley, aims to please by bending in, to be entertainment enough. As such, it succeeds in a way more in line with second-tier Disney animation than high-end Pixar. The hero, fending off an invading force of alien robots, encounters a ragtag group of misfits, whom he must instill with the skill and confidence necessary for the task. The action is shrouded in lessons, delivered in a way that isn’t too preachy, about how it’s okay to make mistakes as long as you learn from them. And there’s an animal sidekick stealing the scene, in this case a robot cat named SOX, voiced in perfect feline-AI stalemate by Peter Sohn.

A few boiled Easter eggs appear to connect “Lightyear” with various “Toy Story” episodes. Do you remember Zurg? He’s back, with the grunt of James Brolin and a secret I won’t tell. A first section – a sort of extended prologue to the main action – recalls the famous montage of “Up” which compresses a long marriage into a few short minutes. This time, the focus is on the friendship between Buzz and his closest colleague, Alisha Hawthorne (Uzo Aduba), who crash-landed on a crowded spaceship on a distant planet.

Buzz doggedly tries to plan an escape, which means embarking on a series of test flights meant to reach hyperspeed. Each trip lasts a few minutes, which is equivalent to four years on the surface of the planet. Buzz stays the same age as Alisha gets married, has a son and then a granddaughter, ages gracefully, and is gone.

His life boils down to a sweet sidebar, a touching miniature movie within the movie. But it might also make you wonder what it would be like if the story was told the other way around, with Alisha at the center. The person she marries is a woman, and a brief show of affection between them has already led to some countries banning “Lightyear,” which deals with the characters’ sexuality in a laudable way. At the same time, their marginality to the main plot feels like the filmmakers were just ticking a diversity box, congratulating themselves, and moving on.

To which they are headed for an energetic and somewhat familiar adventure, with some moments of lovely deep space animation. Buzz teams up with Alisha’s now-adult granddaughter, Izzy (Keke Palmer), and two other Star Command trainees: Darby (Dale Soules), a salty ex-con, and Mo (Taika Waititi), an all-around goofball. . And, of course, the robot cat.

It’s possible that in 1995, “Lightyear” might have been an 8-year-old boy’s favorite movie, but that’s not really the point. Its purpose is to expand brand awareness and close a loop between the things we see and the things we buy.

Usually the movie comes first, but not always, as the “Transformers” franchise has demonstrated. Greta Gerwig is making a film about Barbie. And in the “Toy Story” cosmos, the possibilities are endless. How about a Forky docu-series? Or “Shepherdess,” a folk horror retelling of Bo Peep’s story? Personally, I’d be more enthused by “La Testa di Patata,” an uninhibited Italian rom-com about the courtship of Mr. and Mrs. Potato Head.