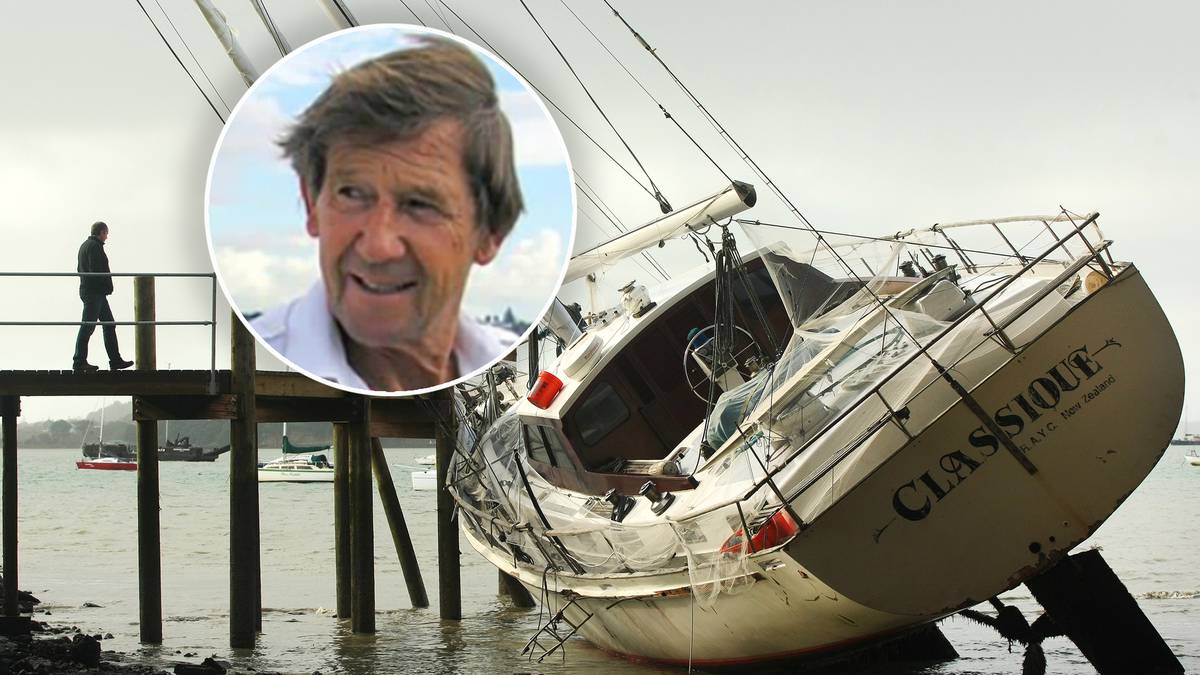 Mel Bolton’s Classic yacht was dragged to its mooring in the piles of the Auckland Harbor Bridge at Shoal Bay during a storm in June 2014. Photo/John Sefton

Mel Bolton had been fighting the council for years for compensation after his yacht was damaged in a storm. A year after his death following a car accident, his wife prevailed.

Mel Bolton has sailed all over the world in his beloved Classic.

Long before his untimely death following a car accident last year, Bolton sailed the 22.8m wooden yacht single-handedly along the west coast of the United States, around the Bahamas, through the notorious waters of Cape Horn at the bottom of Chile, across the Southern Ocean and back to New Zealand.

“It was obvious from the start that Classique was one of the great loves of Mr. Bolton’s life,” his lawyer Shane Elliott said.

Bolton was an experienced skipper, counting the late Sir Peter Williams, QC, among one of his closest sailing companions.

Sometime after returning to his wife, Caroline, and their home in Auckland in the early 2000s, Bolton arranged to moor Classique in Waitematā Harbour, on a council-owned “emergency mooring”. ‘Auckland, moving the boat between moorings if necessary.

In early 2014 the boat was moved to council mooring number 7 at Shoal Bay on Auckland’s north coast.

When a storm caused the boat to drag its mooring line over a mile until it hit the piles of the Auckland Harbor Bridge on June 10, 2014, Bolton was devastated.

The then 75-year-old immediately wrote to the council asking for compensation to fix his pride and joy.

But Auckland Council denied responsibility, sparking the start of a David vs. Goliath battle.

The case dragged on for five years until Bolton retained Elliott through legal aid to sue the council under the Consumer Warranties Act.

A statement seeking damages of $1.089 million was issued in the Auckland High Court in June 2020, almost six years to the day since the storm.

The claim pointed to faults in the mooring, which Bolton was paying $50 a week to hire.

‘Unknown to Mr Bolton when he hired the mooring, the base of it consisted of a single shot ‘half-fisherman’ anchor’, the claim reads.

The anchor had been set on the seabed upside down – with its only fluke pointing skyward, rather than digging into the seabed, according to the claim.

It was what is called in boating a good weather anchorage, “insufficient to hold Classic other than in calm”.

The council again denied any responsibility, saying Bolton only had an agreement to moor Classique on mooring number 8.

He denied having asked in early 2014 to move Classique to anchorage number 7.

He also said that Bolton had witnessed an N7 mooring service and later admitted that he had been concerned about whether the mooring had been properly reset, but had not informed the master of the port.

The council denied that the incorrect placement of the mooring led to it being dragged across the seabed and said it was due to the extreme weather conditions that night.

He said the Consumer Warranties Act did not apply and he had rented the mooring primarily on a charitable basis.

But Bolton argued that the mooring was grossly insufficient.

In his second statement, dated May last year, Bolton said the emergency mooring lines were intended for use by larger boats, including passing super yachts and commercial vessels of maximum length 30m.

He said N7’s anchor weighed only 1278kg and was grossly insufficient for a vessel the size of Classique and for the size of the vessels for which the emergency mooring lines were intended.

Bolton said council was aware of and consented to his using emergency moorings other than N8 from time to time and he claimed the Harbor Master’s office issued receipts for his N7 rent .

In its defence, the council said the emergency mooring lines were not available for hire for general use other than by Bolton.

The board repeated its previous position that Bolton only had permission to berth Classique on the N8 except for limited periods when repairs to that mooring were required.

He denied that Bolton rented N7 and said he only occasionally paid rent for N8.

The council said it was risky to moor a Classic-sized vessel on a mooring during a major weather event and Bolton should have known that.

But Elliott, an experienced sailor himself, said it was almost unheard of for a yacht to be dragged a mile on its mooring during a storm.

He pointed out that it was impractical to move a vessel to a marina before every storm, and even if there was room, a yacht was more susceptible to damage in a marina than on an open anchorage. .

Despite council claims that Bolton did not have permission to use N7, the pensioner produced years of rent receipts for N7 signed by the harbor master, proving otherwise.

At one point in the saga, Bolton became shaky. Once capable of negotiating the most delicate seas, the age of the debonair skipper is beginning to be felt.

He had undergone hip surgery, wore crutches and spoke almost in a low voice.

While waiting for the case to go to trial, Bolton regularly visited Classique where he was moored on the Mahurangi River with a boat salvage company in Warkworth.

The elderly skipper was rowing up to his yacht, crutches in tow, to tinker and attempt minor repairs.

It was on one such trip north that Bolton – then 83 – had a car accident with a lorry and was admitted to hospital in Auckland.

He died days later, on June 23 last year, before he could sign his new memorandum of evidence in the case.

When Bolton’s widow and executor of his estate, Caroline, took over as plaintiff and attempted to have the record admitted as hearsay, the council protested, questioning its reliability.

The council called Bolton an irresponsible skipper, who crushed buoys and was sued by Maritime New Zealand for shutting down the Auckland-Waiheke ferry in 2011.

“They acted like he was Blackbeard the hacker and you couldn’t rely on him,” Elliott told Open Justice.

Bolton was a “colorful character”, a “lovable red”, but he could not be criticized as a poor sailor or a man who did not care about his yacht, Elliott said.

“The position they took was so dishonest.”

Then in May, almost eight years after the storm and just weeks before the trial began, a financial settlement was reached and a Notice of Discontinuance was filed in the High Court.

Elliott said that was despite none of the evidence changing. He said Bolton would be happy with the win if he was alive.

Auckland council did not respond to questions about whether it admitted liability by settling out of court and said its defense was outlined in its court statements.

A spokesperson said the terms of the settlement were confidential, but the council had spent $10,000 of taxpayers’ money on legal fees in the long-running saga.

She said the $10,000 was the excess of Auckland Council’s insurance policy.

“Any additional cost is not known to the board and would be subject to statutory lien.”