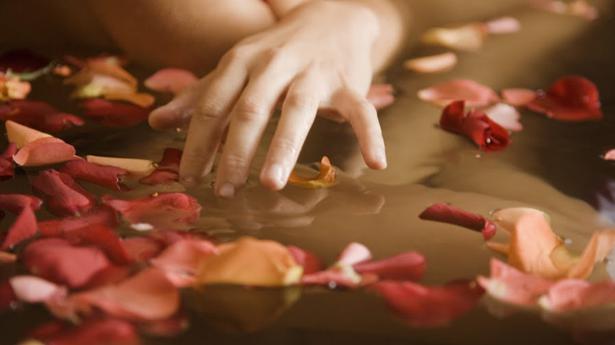 Come mid-July, the skies of Kerala turn grey, the temperature drops and the rain falls relentlessly. It is the beginning of Karkkadakam, the last month of the Malayalam calendar. With agriculture shut down and people forced indoors, time is traditionally used to rejuvenate body and mind.

Many traditional customs are associated with this period, such as reading the Ramayana daily and following a strict diet. But the one ritual that Asha Devi Varma, a former agriculture officer and member of the Poonjar royal family remembers with much nostalgia is the Karkkadaka kuli or the ceremonial bath. “It was big business in the old days,” says Asha, explaining how women soaked themselves in vegetable oils and rubbed it with a homemade paste of wild turmeric at the pond at her grandmother’s house. maternal mother in Tiruvalla.

Asha has been making and retailing these traditional oils and scrubs for six years from her home in Tripunithura, lest the recipes and customs be lost forever. “Our grandmothers gave birth to many children and aged in good health thanks to the care they gave their bodies during this month. It rejuvenates bones, skin and hair,” she says , explaining why she introduced a Karkkadakam (₹600) bath basket this year in contemporary packaging, which includes hair and body oils, shampoo and scrub.

The basket is a natural progression of what Asha does on a small scale at home and for her friends and family. She has loyal customers, she says, and sells them to women’s groups on social media. “As it is a Karkkdakam kit, it is bought by women of all age groups,” she says, adding that although she does not have a sales target yet, she has sold about 100 baskets this year. Asha home delivers the baskets with plans to market them professionally in the future.

For women, by women Femlogix Enterprises unit at Mullankolly in Wayanad, run by women

In the Mullankolly panchayat in Wayanad, Bindu Sathyajith established a women’s empowerment unit, Femlogix Enterprises, and launched the Karkidakka Ayur Arogya Soundaraya this year primarily, “to pass on traditional knowledge of wellbeing to the next generation”.

Bindu, whose great-grandfather was a well-known Ayurveda expert, says she is the fifth generation to carry on the tradition. She grows around 14 plants and herbs needed as ingredients for oils and set up the unit during the pandemic when farmers in the area were struggling to make a living. Some of the plants she grows are cheroola (mountain knotweed), uzhinja (balloon plant), Aruka (bermucla grass), nilampana (grass with golden eyes), visnu granthi (scalable), thiruthali (morning glory) and purvankurunthal (small iron grass)

Asha uses gingelly oil for the body and coconut oil for the hair. The scrub is made from Vetiver. Other products in her basket are organic turmeric powder, virgin coconut oil with dandapaala (ivory wood), shampoo and soap with coconut milk and body scrub with vetiver roots.

As it is difficult to dry your hair in the monsoon season, the wet hair was spread on an overturned basket under which ashtagandha was burned and its fumes dried the hair. The scented smoke was also a treatment for hair lice. Ashtagandha is a powder made from the leaves, roots and bark of eight fragrant plants. 
In 2017, Dhanya Jathavedan opened a women-only Ayurveda Nagarjuna Stree center in Tripunithura, to “pass on” her 95-year-old grandmother Hymavathy Thampuran’s beauty and wellness regimen to others women.

“The bath is considered a purification ritual. In the past, women regularly took oil baths on Tuesdays and Fridays, as they were said to be auspicious. A scrub made from tree bark, inchand areca nut powder soap, Vaga podi, was used instead of soap. ” Vaga podi was also prescribed for women who had body odor,” says Dhanya, adding that the shampoo at the time was Thai podi (hibiscus leaf powder) which foams and conditions the scalp. Lentil powder was also used as a body scrub. There was a special ship to transport body scrub oil and powder. “It had two compartments,” recalls Dhanya.

According to her, there were different types of body oils, “depending on the body structures”, but Kaiuniyam (false daisy, bhringraj oil) was common. When the bath is finished, Rasnadi Choornam – a powder made from several herbs like turmeric, pepper, sandalwood and the leaves – would be applied to the top of the head to prevent a cold.


Bindu’s kit includes a body scrub made from wild turmeric and pay podi or coarse lentil powder, organic shoe flower soap, tree bark loofah and mukkuti powder (biophytum) made from leaves and roots, which is applied to the forehead to prevent headaches. The body oil is a 150 year old recipe that uses ghee, turmeric, virgin coconut oil and gingelly oil. She also provides herbal teas, coffee and canned and a moisturizer made with wild turmeric and coconut oil. She says women should perform the ritual bath for seven, 14 or 21 days during the month.

Diabetologist Dr. Radha Unnikrishnan, who uses Asha’s bath caddy, finds it “very convenient” and is assured of the purity of the ingredients used. She remembers her mother making the oils at home, but she doesn’t have time for the tedious process.

“This month is for pampering our body and our hair. The kit makes this easy,” she says.