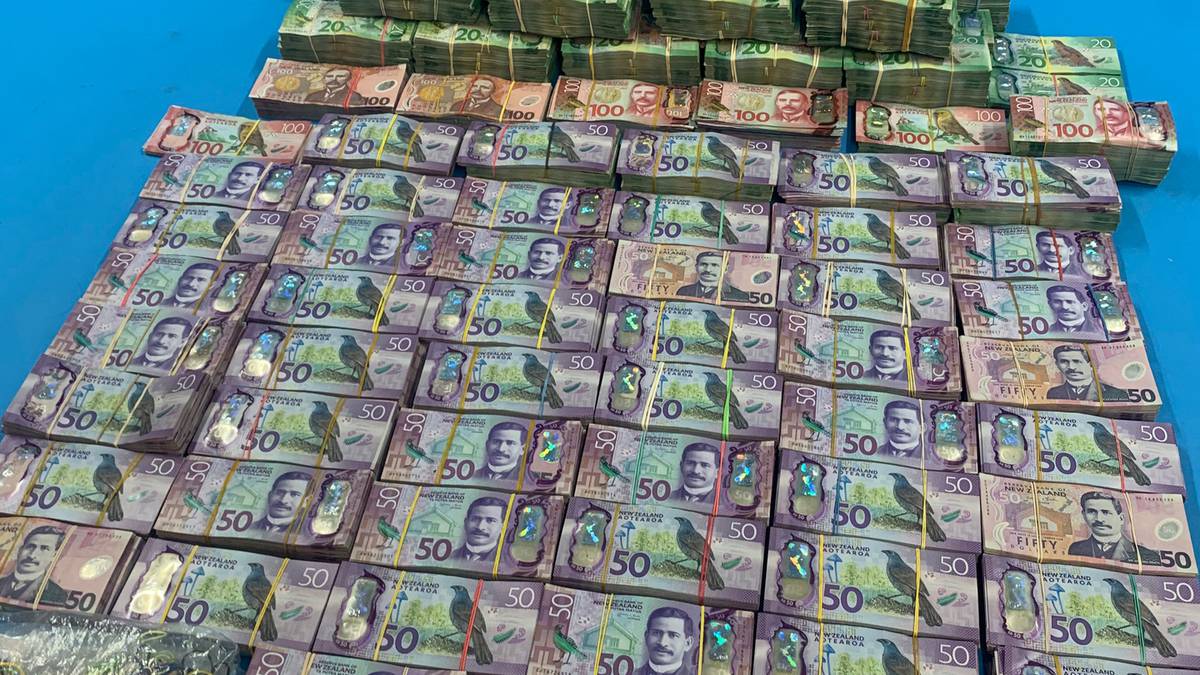 New Zealand Police say they have dealt a “cruel blow” to organized crime after a major transnational operation resulted in 35 arrests and $3.7million in assets seized.

A 66-year-old Auckland man who served as a ‘bank’ for an international drug syndicate – ordering a woman to bury cash in his garden as police, after secretly surveilling him for months, began to rush – was sentenced to nine years in prison.

The man, who continues to face an interim name deletion, admitted earlier this year to laundering at least $2.3 million on behalf of the union.

He also admitted through his guilty pleas to helping devise schemes to smuggle an unknown amount of secreted cocaine into South American lumber and more than 600 kg of methamphetamine inside ships imported from China. Additionally, he participated in a plot to recover 1.5 tonnes of cocaine from a mothership 320 km off Tauranga.

In the end, all these plans seem to have failed, but it is a crime to make such arrangements even when they are not executed.

The union would have better luck with other smuggling schemes, court documents say.

Judge Graham Lang described the man today as having no criminal record, but playing an important role in the union. The defendant appeared via video link at the sentencing hearing in the Auckland High Court.

He was arrested in June 2021 as part of a massive international law enforcement effort dubbed “the sting of the century”.

Hundreds of people have been arrested – dozens of them in New Zealand – over Operation Trojan Shield, in which millions of conversations on a fake encrypted network led to globally coordinated raids. The communications platform had been considered impossible to intercept by law enforcement, but was actually created by the FBI and the Australian Federal Police, law enforcement officials said at the time. .

The sting ended with Operation Van, which was already an ongoing investigation in New Zealand into the accused and his union.

Police first obtained a warrant to begin listening to calls from the accused in January 2018. Over the following months, they heard about the various import programs and what was being done to implement them. .

In February of that year, police recorded him discussing the importation of cocaine in balsa wood blocks from an Ecuadorian lumber company. In subsequent conversations, the man referred to selling the timber once the cocaine was withdrawn to “offset the price” and sending further shipments of timber and plywood to New Zealand “to make it look legit”. He expressed his frustration that the program is not moving faster.

Talks of the timber scheme and another scheme to conceal methamphetamine in boats from China had both “paused” in June 2018. But there was no indication that the plans had stopped. Instead, authorities said, the defendant and others appeared to be waiting for funding.

In October 2018, police resumed a new plan being discussed to recover 1.5 tonnes of cocaine from a mothership 320km off Tauranga.

The defendant and others bought an $180,000 boat nicknamed the MV Matariki in the Marlborough Sounds and renamed it “Kryptonite”. The boat was taken to Rotorua and $100,000 was spent to upgrade it with additional fuel capacity, specialized radar and night vision capabilities, authorities said.

“The boat was kept in a state of readiness but, to the best of our knowledge, was not used for any imports,” court documents say.

In April 2019, the defendant received a delivery while on board the ship, earning him a new role in the union. The delivery included scales, a money counting machine and approximately $800,000 to serve as a “float”.

“Afterwards, you started acting as a bank for the union,” Judge Lang said during today’s hearing. “You would receive the money and verify it before authorizing [the distribution of the drugs].”

A month later, the accused arranged for a safe to be delivered to another person and was secretly watched by police as he made frequent trips between Auckland and Rotorua to collect cash. The amounts were often over $300,000 and sometimes over $1 million, Judge Lang said.

Around the same time, he helped facilitate the purchase of six gold bars worth $416,000 as part of the money laundering effort.

A secret July 2019 search of a Rotorua storage facility led to police finding four lockers filled with 140 packets labeled as Chinese tea. Police estimated that the packages contained 150 kg of methamphetamine. But the discovery was kept secret so that the investigation could continue.

A month later, police decided to formally search the storage facility, arresting another man who would also later plead guilty to his involvement in the syndicate. Police found 100 labeled packets of Chinese green tea, each containing a 1kg block of methamphetamine, and recovered an additional 38kg of methamphetamine from a cold bin at another location.

Combined, the hideouts had an estimated market value of $138 million.

The defendant who appeared in court today appeared shaken as he left Rotorua at 2.44am shortly after his co-conspirator was arrested, documents show. In an intercepted call that took place while driving, the accused had a conversation with another person about his phones being destroyed and what to tell the police if contacted.

On the same day, he asked another person by phone to immediately vacuum pack the money that had been hidden in a safe and bury the money in his yard.

Apparently worried the heat was on him, he was allowed to step down from his role as banker for the union, documents show.

It had been around 20 months since the police started recording the accused. It would be nearly two years later before the police decided to shut down Operation Van, executing several search warrants and arresting the accused and others.