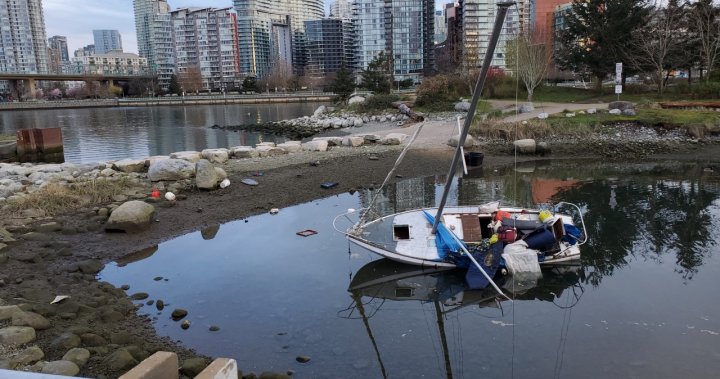 A resident of Vancouver’s False Creek talks about abandoned ships after saying a sailboat ran aground and was targeted by scavengers.

Ken Newbert said the boat ran aground in a cove between Habitat Island and Hinge Park early last week and quickly became a source of litter on the shore.

“At low tide it’s totally exposed, you can go all the way around the boat…people had taken out all the trash, and it was trash, it was in the boat,” he said. said.

“It was old cushions and tarps and big fiberglass tubs, just crap. I don’t think there was anything salvageable.

Newbert’s wife complained to the city, and soon after the debris on the shore was picked up, he said.

But on Saturday, the apparently abandoned boat remained in place, with a notice taped on it saying that Vancouver police and federal authorities were aware of it and that “steps are being taken to resolve the matter”.

Cleaning up abandoned boats is officially the responsibility of the ship owner, but in many cases identifying that person can be a problem. Transport Canada can act if the vessel interferes with navigation, and the Canadian Coast Guard is responsible if there are safety or environmental risks.

Newbert said the abandoned sailboat was just the latest case of what he called lax enforcement of anchoring regulations in False Creek.

“As far as I know, it’s free for everyone. They park and park. There have even been guys on the other side of the science world, they stop, moor and I think they use shore power,” he said.

“I am not against boat people. I am against people who think they have the right to stop here, live on their boats, throw all their crap in the water and pay no tax. I oppose it.

Under Vancouver regulations, vessel operators can obtain a free permit for two to three weeks (depending on the season).

But residents, paddlers and some members of the boating community allege that some vessel operators are flouting those regulations by staying longer, dumping litter or anchoring in the waterway’s prohibited “navigable channel”.

But when it comes to the issue of fraudulent boaters, the town acknowledged it was an “ongoing problem not just in False Creek, but across the region and province”.

In Vancouver, this problem is complicated, according to the City, by the fact that False Creek is a shared jurisdiction between municipal, provincial and federal authorities.

“The City is very aware of the problem of illegally moored and abandoned vessels in False Creek and is working with its provincial, federal and municipal partners (VPD, Park Board) to explore new regulatory tools to manage what is a complex shared problem. by all of these jurisdictions,” he said in a statement.

Newbert said he didn’t care who was in charge of enforcement, as long as the job was done.

“We really don’t like it. The strange boat that parks there for a night or two is fine,” he said. “But there are boats there, I’m not even sure they can move.”

— With files from Paul Johnson