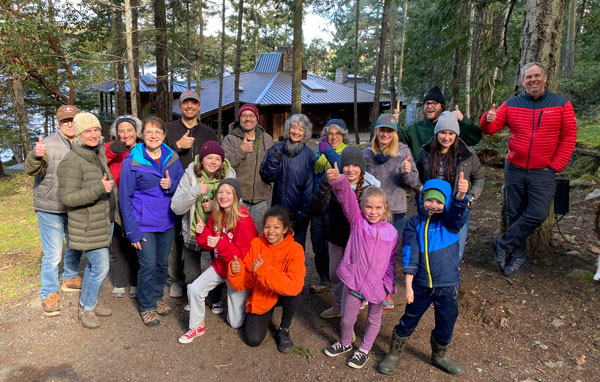 Canoe Island French Camp, a small non-profit organization located between Shaw and Lopez Islands, is currently undertaking several major upgrades and additions to its facilities. From spring to fall, the organization welcomes schools and adults to the island for programming and organizes its overnight summer camps for young people. During the winter months, staff tackle large-scale projects. While this ambitious multi-year development phase proved challenging for several reasons, the extensive capital improvements also provided an opportunity to partner with the wider San Juan Islands community.

Many of the camp’s recent projects have been implemented with the support of local communities and collaboration with Islanders. The community of Shaw, for example, worked closely with CIFC to replace the Canoe Island undersea power cable. The original cable was installed in 1967 between Shaw and Canoe Islands, and the organization has been raising funds for this project for two years.

Another project that has fostered a partnership between CIFC and the local community is the construction of a greenhouse. This addition was completed in 2020 and received funding from individual Islanders as well as the San Juan Community Foundation.

CIFC’s latest projects involve replacing aging infrastructure. The camp is currently fundraising for a new boat to replace their 51-year-old vessel, the Ferry Queen. The new boat is expected to cost over $300,000 and will have an aluminum hull, as well as two outboard motors.

Another major step to take this winter is the replacement of the bridge. Built around a building called Le Château Beauregard, the terrace is 30 years old and made of old or second growth cedars. Its replacement will be constructed from cedar felled and milled on Canoe Island. Additionally, the new design is a near-replica of the old structure; these choices preserve the beautiful architecture of a historically significant building.

The latest upcoming project on Canoe Island involves replacing the roofs of two main lodge buildings. To complete this improvement, CIFC is pleased to have partnered with Fly Guys Construction. Owner Austin Reese donated $10,000 of his profits to benefit our organization. The project involved replacing nearly 30-year-old cedar shingles with metal roofing material. This material is more fire resistant and environmentally sustainable, and has a much longer lifespan. The rooftops have just been completed in time for students and guests to arrive on the island for programming.

Fortunately, CIFC was able to overcome several challenges in pursuing these major upgrades and additions. For construction projects, the remoteness of Canoe Island makes it difficult to hire contractors, with transporting them to and from the island adding a layer of complexity. And with the recent construction boom in the San Juans, contractors have extremely limited availability. To deal with these complications, the CIFC relies mainly on the internal workforce.

Executive Director Ben Straub and Island Caretaker Dusty Caldwell carry out all maintenance and upkeep of the facilities and complete the majority of construction projects. In addition to replacing the bridge, the two will participate in the replacement of the roof. CIFC also persevered during the Covid-19 pandemic to complete each of these recent facility upgrades. The pandemic has brought new financial and practical challenges to the organization, and community support has been instrumental in overcoming them. Local islanders have participated in programs, donated to camp, and partnered with CIFC on several projects, all of which have helped the non-profit organization maintain momentum throughout its construction period and renewal of facilities.