IN THE SPOTLIGHT – Solomon Star News 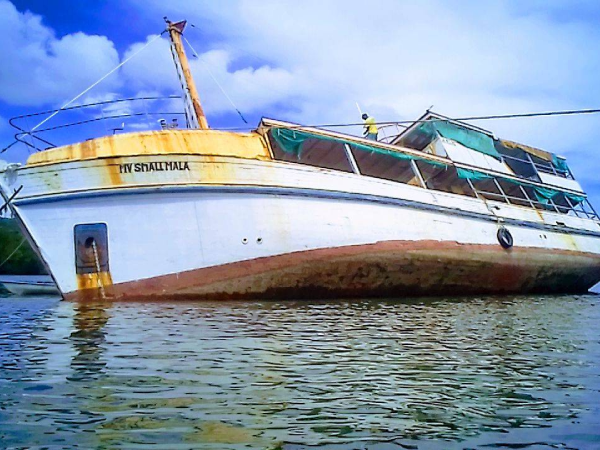 The question of who actually owns the vessels purchased by the constituency is in the spotlight with the recent appeal from a Small Malaita community to the Small Mala Shipping Management to inform them of the action it will be taking on the MV Small Mala failed.

SHIPS purchased as part of the government’s multi-million dollar shipping grants for constituencies was once a thriving business transporting passengers and cargo to and from ports across the country.

Now they appear to be a dying breed as neglect begins to set in.

While some are still plying the ocean with their trade, others are struggling to stay afloat – due to repair costs and waiting, increasing the constituency’s debts.

Take for example the case of Small Mala (SM), the passenger/cargo boat purchased for the Small Malaita constituency under the shipping grants administered by the Ministry of Infrastructure Development (MID).

Or the case of the Gulatatae – the landing craft purchased for East Kwaio constituency in Malaita. Both ships are in debt and are being held at AviAvi Slipway near Tulagi in the Central Islands Province.

In the case of the MV Small Mala, her disappearance began four years ago when her propeller allegedly fell off, forcing the vessel to be anchored in Port Adam or Fanalei where she remained until she was recently beached by a storm, according to locals.

As there was no fuel to pump water from the engine, it was decided to push the vessel onto the reef and sink it in a small passage in the nearby mangrove used to catch dolphins, according to one account. He stayed there today.

Today, the ship sits at AviAvi Slipway with huge unpaid debts. It is unclear whether repair work has even begun. Locals say no one seems to be in a rush to fix the problem so the ship can once again resume its valuable services to communities across the country.

So who owns the ship? Is it Small Malaita constituency or someone else?

According to published reports, only two shareholders of the Small Mala Shipping Company manage the ship – former Prime Minister and MP for Small Malaita constituency, Rick Hou, who is believed to own 99% and former Permanent Secretary to the Ministry of Finance. and Trésor and now UNIS pro-vice chancellor Shadrach Fanega, who owns the remaining 1% stake.

Mr Fanega has served as chairman of the board for the past six years, according to residents of Small Malaita constituency.

This week there were calls on social media that after 12 years in power, Mr Hou should now step down as an MP because all the promises to develop Small Malaita constituency over the past 12 years failed, as also evidenced by the bankruptcy of the shipping company.

A shipping company insider Small Mala said huge debts incurred by the Small Malaita Constituency Constituency Office remain unpaid today. This is one of the main factors behind the ship’s financial paralysis.

Mr. Hou has held the seat for three consecutive terms of four years each.

In the case of Gulatatae Shipping, no one seems to know who owns the Landing Craft, despite a good management team at the helm. East Kwaio MP Festus Stanley Sofu is the chairman of the board which includes all his supporters

Gulatatae Landing Craft from East Kwaio constituency and Mala Mweimwei from Small Malaita constituency share some common characteristics. These include, but are not limited to:

Until the owners who have benefited financially from the ships’ operations over the years assume their responsibilities, it’s unclear when the two ships will once again be plying the oceans.