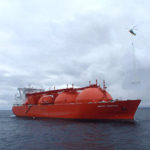 Delivered on January 24, 2022 from the shipyard in Wuhu, China, the Lady Marie Christine is one of the first short sea shipping minivans in Europe to run on dual fuel with LNG as the main fuel. With a length of 115 meters and a deadweight capacity of 5,900 tons, she is the first of a series of four identical vessels ordered by the Dutch shipowner and manager Wijnne Barends, a subsidiary of the Spliethoff group. .

Combined efficiency improvements result in very low EEDI
Lady Marie Christine offers a range of industry-leading efficiency upgrades that put her and her sister ships on track to meet IMO’s decarbonisation targets by 2050: a dual-fuel engine designed to run on LNG as well as conventional marine diesel; hull lines optimized to minimize resistance in the water in conjunction with a variable pitch nozzle propeller; an optimized drive train and frequency controlled PTO driven shaft generator allowing the main engine to run at optimum RPM and the propeller at optimum pitch; and a waste heat recovery system. The two redundant auxiliary engines are required for hotel charging during port stays only. The combination of all these features allows the vessel to achieve an excellent EEDI value of 9.33 g CO2/tNm compared to the stage 2 required value of 15.9 g CO2/tNm – in other words, an value as low as 56.7% of the required value.

Designed to decarbonize
Ad Toonen, technical director at Wijnne Barends, points out that the series of vessels are designed to meet future environmental legislation without requiring substantial modifications. “The interaction between hull lines and propeller arrangements is a key factor for low fuel consumption,” he points out. LNG was chosen as the main fuel because of its low environmental impact and because it can be easily replaced by carbon-neutral bio-LNG in the future.

“Our special waste heat recovery system also plays a key role in the overall energy efficiency concept,” continues Toonen. “It reduces fuel consumption and carbon emissions by heating all interior spaces as well as the hot water system using the heat from the main and auxiliary engines. During the winter season in the Baltic you need a lot of Finding a way to transfer the heat from the aft engine room to the forward deckhouse and crew quarters was a bit tricky, but with good insulation we got the desired results. 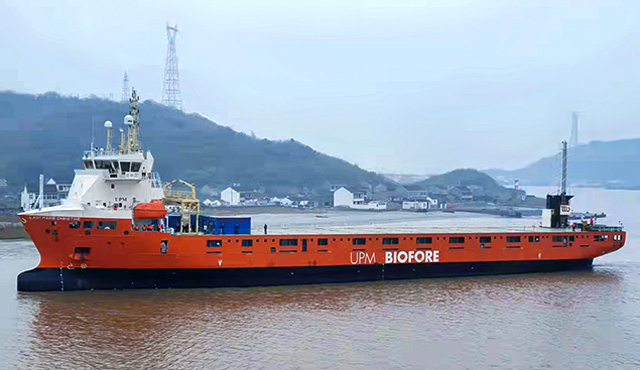 LNG as a plausible pathway to a green fuel future
“I hadn’t fully realized the potential of the LNG concept until we discussed it in depth with DNV, and today I’m fully convinced,” says Toonen. “For me, DNV is the leader on the subject of LNG. They have a lot of experience and a clear path to the future, and they’re a good fit for our business. When we want to tackle other fuels, such as ammonia or methanol, we still see a bright future for this vessel and its fuel options. Bio-LNG will be the most plausible next step. As with other fuels, we’ll have to see what future rules come into place, and then we’ll know better what can be done. But with the configuration of this ship, we are two steps ahead to be ready to comply with future rules.

Technical loading flexibility
“The Lady Marie Christine and her sister ships, which will all be delivered in 2022, are extremely versatile multi-purpose vessels,” emphasizes Jost Bergmann, Business Director MPV & General Cargo Ships at DNV. “And in terms of improving efficiency and reducing emissions, they go well beyond what is currently standard in the shipping industry.”

Dutch ship design company Conoship International was involved in the basic design and development of the Lady M series. Conoship designers are very familiar with the specific requirements of these short sea shipping minivans, which mainly transport forest products such as timber, pulp and paper. for the long-term charterer UPM. “We faced a challenging set of design requirements in this project,” says Jan Jaap Nieuwenhuis, managing director of Conoship International. “This has led to an innovative and highly fuel-efficient vessel with an extremely compact engine room, long hold length and impressive deck area.” After Conoship completed the design, Wuhu Shipyard continued with detailed engineering. 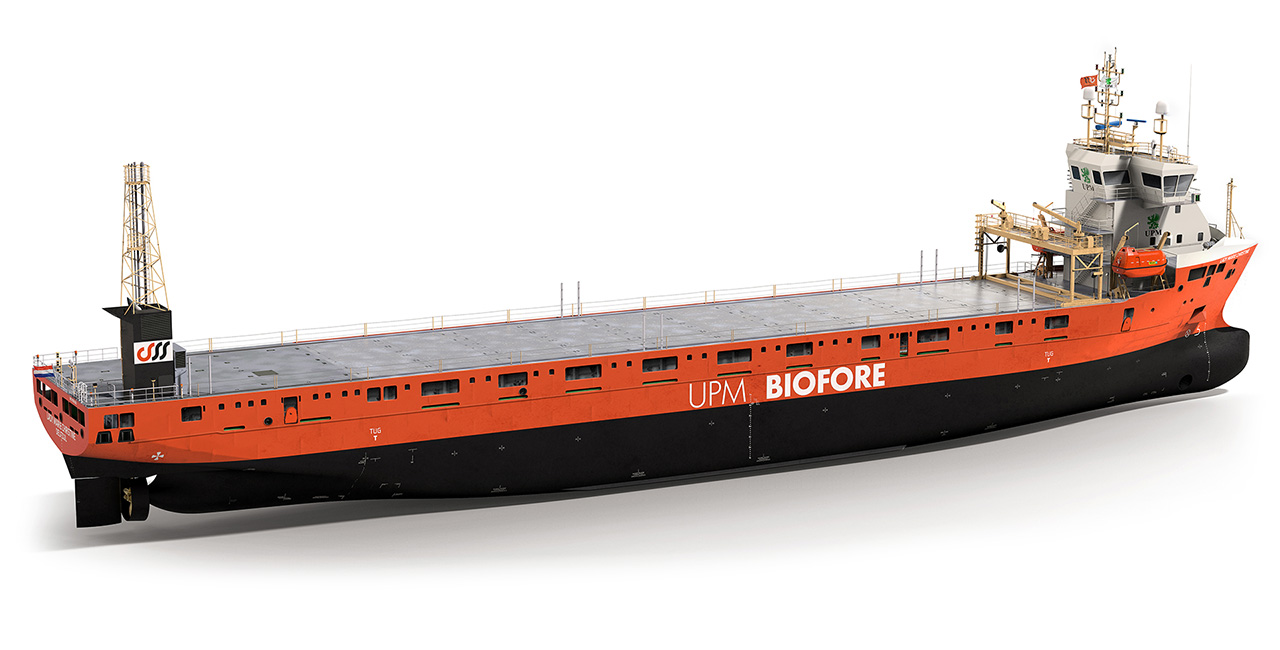 The forward deckhouse allows the vessel to carry oversized cargo, which adds to its flexibility.

To maximize the available cargo space and the variety of cargo the Lady M series can carry, especially on deck, the vessels feature a forward deckhouse, which ensures an unobstructed view from the deck, and a large deck space suitable for oversized cargo. Vessels have DNV’s Hatchcoverless class rating and are certified for open top operation at 5.5m draft to carry heavy and/or bulky cargo that will not fit in the hold or is too heavy to carry on deck, says Ad Toonen.

“For the first two years, these ships usually sail on a fairly regular schedule along the same route. They spend 80-90% of their time between the English Channel and the Gulf of Bothnia, going north one week and south the next, always sailing at weekends and loading and unloading on Monday, Tuesday or Friday. The capacity of the LNG fuel tank is designed for a round trip of two weeks; we will mainly bunker in Finland,” says Toonen.

Solve the LNG tank location problem
“Finding the best location for the LNG tank without sacrificing valuable cargo space was quite a challenge,” recalls Toonen. “Initially, we had planned to place two 100 m3 tanks on the deck. With designer Conoship and DNV we discussed several alternative ideas and finally came up with this innovative design idea of ​​placing a single 200m3 LNG tank below deck which is quite an advantage of a operational point of view. The tank is located on the port side of the ship, near the main engine, Toonen explains. “When you stand next to the engine, the separate LNG tank compartment is approximately one meter above you.” Special insulation and fire protection provisions and a reinforced supporting structure guarantee the safety of this design. “It was more or less the most talked about part of the ship,” Toonen recalls.

The layout of the tanks increases the cargo space available on deck by 25% compared to similar vessels. This means that large project cargoes such as wind turbine blades longer than 80m can be transported. 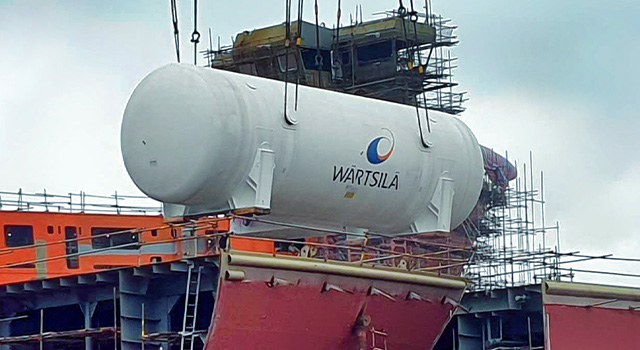 The LNG tank is lifted into place below deck, where it will be clear of loading operations.

A proven cooperative partnership yields the best results
“When we first met DNV in Hamburg, I was very impressed with all the experience directly available at the head office,” says Ad Toonen. “We discussed a variety of topics and in each case found ourselves speaking with an expert on the subject within minutes – someone who we could ask specific questions and who would give us the right answers. I’m still impressed with that.

The Lady M series carries a number of DNV class ratings, including the highest Swedish-Finnish ice class 1A for use in the Baltic, Gas Fueled rating, various ratings for reinforced inner bottom, main deck and hatch covers allowing ships to carry heavy cargo such as rolls of paper, Grab notation for the use of 20 ton grapples in unloading operations, Hatchcoverless notation and several others to maximize the versatility of cargo. The ships will sail under the Dutch flag.

“We want our customers to be successful in the long term,” stresses Jost Bergmann. “In particular, we make it a point of honor to support our customers’ decision to use LNG as a fuel in pursuit of ambitious decarbonization goals. With these new constructions, Wijnne Barends assumes the role of pioneer in short sea shipping.

Keeping customers well informed during the new build phase is always a priority at DNV, another aspect that Wijnne Barends really appreciates, says Ad Toonen: “We were able to communicate closely with DNV through the Veracity new build app. When we had a status question, we got a response within minutes. Soon Lady Marie Christine will be arriving here and I have invited DNV on board to take a look and discuss further improvement ideas for our upcoming building projects.
Source: DNV, https://www.dnv.com/expert-story/maritime-impact/Highly-flexible-LNG-dual-fuel-MPV-excels-with-low-EEDI.html?utm_campaign=MPV_394_Winnje%20&%20Barends&utm_medium=email&utm_source= Eloqua